Women who marched in Washington hope to sit in Hartford 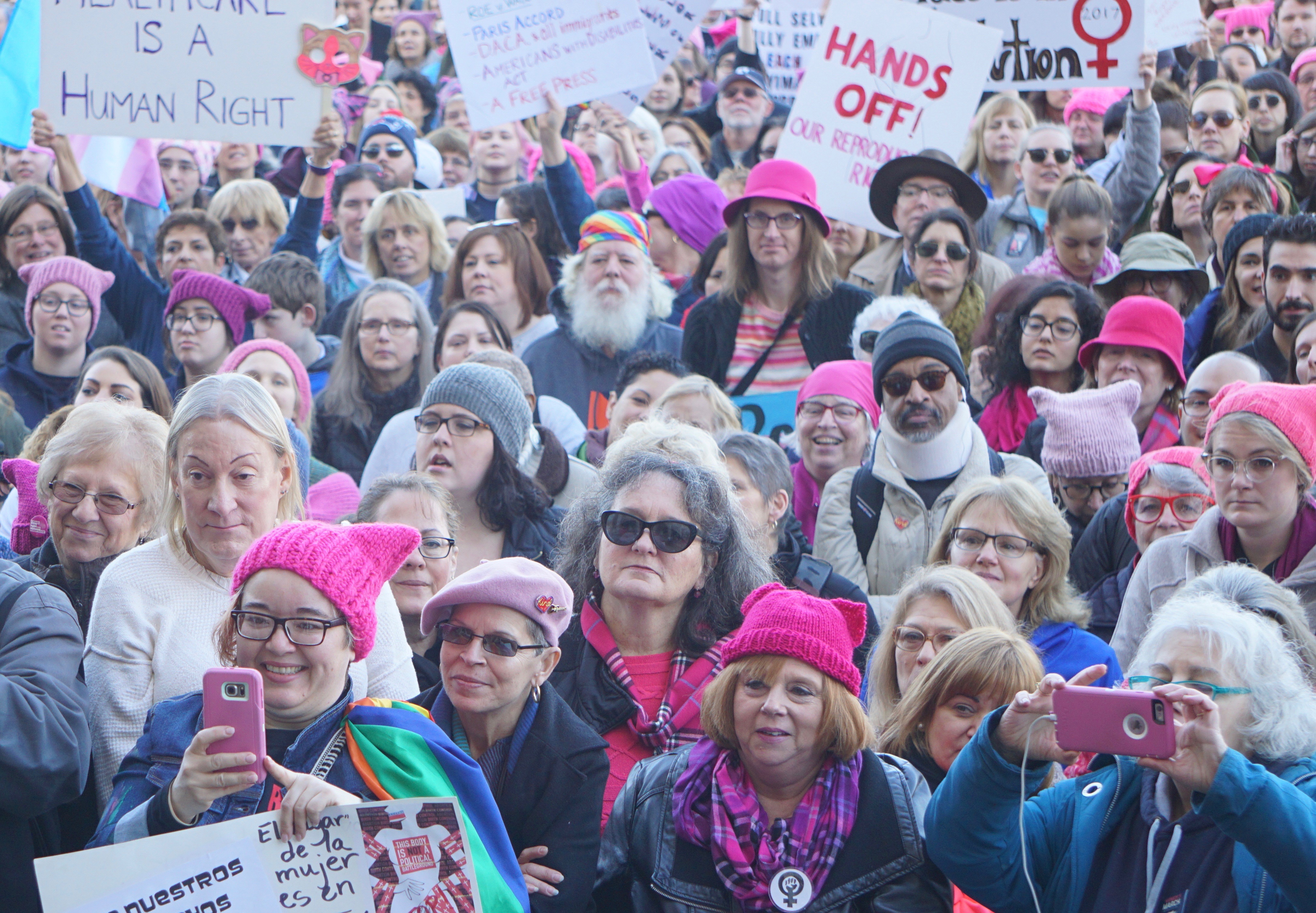 Ten thousand gathered outside the State Capitol in Hartford on the day of the Women’s March. One of the organizers is considering a run for the General Assembly.

Amanda Webster planned to go to Washington last January to celebrate the inauguration of the first woman to win the White House. Instead, she joined the throngs of women protesting the election of a man whose campaign they denounced as polarizing and demeaning to women, Muslims, immigrants, the disabled and racial minorities.

The Women’s March in Washington, a raucous counter to the inauguration of Donald J. Trump, was mirrored in many cities throughout the U.S. It exhilarated Webster, a 28-year-old mother of two from Granby, a semi-rural community northwest of Hartford. But the high diminished on the long train ride home to Connecticut. She remembers thinking, “Where do we go next?”

In her case, Webster hopes, it will be to the state House of Representatives.

As one of the first candidates to file for the House, Webster is in the vanguard of what Democratic activists say is a gathering movement of women exploring campaigns for the General Assembly, where men hold more than 70 percent of the seats. They quickly organized via social media in groups such as Pantsuit Nation, Indivisible and Action Together CT in reaction to Trump’s election.

Now, the question is how many will join Webster in taking the next step — becoming a candidate.

“I think we’re going to be seeing dozens of Democratic women stepping up to run for office next year,” said state Sen. Mae Flexer, D-Killingly, the director of the new Connecticut chapter of Emerge, a national group that recruits, trains and mentors Democratic women seeking office. “I think you are going to see a lot more competitive races.” 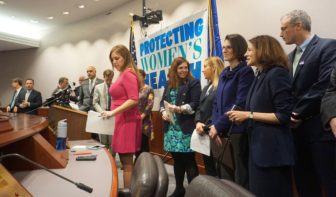 Flexer is to be joined at midday Monday by Lt. Gov. Nancy Wyman and Secretary of the State Denise Merrill outside the State Capitol, beneath a niche holding a statue of Ella T. Grasso, the first woman elected as a governor without the boost of following her husband into office. They are publicizing a Jan. 6 deadline for applying for entrance into the Emerge program.

Webster, who says she already has raised more than $5,000 in small contributions to qualify for public financing, is running in the 62nd House District of Granby, Hartland, Barkhamsted and New Hartford against Rep. Bill Simanski, R-Granby. He unseated a Democrat in 2010 with a 36-vote plurality and was unopposed in 2014 and 2016.

“We’ve learned we cannot wait for other people to represent us,” said Webster, who first became an activist on behalf of an autistic son, raising money for an autism group. “Having a medically fragile child, I have to act. I don’t sit on my hands very well.”

Forty miles to the south, a Yale University scientist named Valerie Horsley is getting ready to open a campaign to oppose Sen. George Logan, R-Ansonia, a freshman who unseated a 12-term Democratic incumbent. Like Webster, the defeat of Hillary Clinton and election of Trump was a catalyst for Horsley.

“I was basically horrified by the results of the election in 2016,” said Horsley, who lived in New Haven and has relocated to Hamden. “I woke up the next morning and had to tell my two daughters about the election of this man who had no leadership skills. I just thought I had to do something.”

Within two weeks after the election, Horsley and others found each other on social media, exchanging ideas about how to constructively respond. They created Action Together CT, a group that quickly grew to 2,500 members in New Haven County and more than 5,500 statewide. She says they made 300,000 phone calls to turn out the vote for Democrats in the municipal elections last month.

For Caitlin Clarkson Pereira, 32, of Fairfield, the spark for activism was a protest at JFK International Airport over a Trump travel ban directed at Muslim nations. She drove to Terminal 4 and signed up as a volunteer for what turned out to be a demonstration that went on for days.

“It definitely changed my life,” she said.

She has since worked with a group that established a “Nasty Woman” photo exhibition in New Haven and became secretary of her local Democratic Town Committee. She previously has lobbied in Hartford on behalf of opening institutional aid to undocumented students, a cause important to Pereira, who works at Southern Connecticut State University.

She is considering running for the House from the 132nd District of Fairfield.  To win, she would have to convince voters to unseat another woman.

The incumbent Republican is Rep. Brenda L. Kupchick, the senior member of an all-female, three-person delegation representing Fairfield, two Republicans and a Democrat. Kupchick unseated a Democrat in 2010 and has easily won re-election in what the GOP has come to view as a safe seat.

“The math matters,” Pereira said. But she added, “The numbers are never an absolute. If I do file, I’ve made it a point to say, ‘I’m not afraid to lose, not if I can make a positive change’.”

The ambitions of some Democratic activists may conflict with the plans of others. Horsley is only one of several activists considering a run for the Democratic nomination against Logan, whose defeat would cost the GOP its only black member. In other cases, the seats interesting women are held by incumbents, including some who are progressive Democrats.

Such is the case with Jillian Gilchrest of West Hartford, a Connecticut organizer of the Women’s March in Washington. A satellite event in Hartford  drew a crowd estimated by police at 10,000 on the north side of the State Capitol, spilling into Bushnell Park.

“I think that women saw that in the last election we have a long way to go to achieve true equality,” Gilchrest said. “The march may have been one day, but we have to continue working hard each and every day after that. I think women realized, including myself, the best way to make change is to step up and lead.”

She is interested in running for the House, but she lives in a district represented by Rep. Andy Fleischmann, a liberal Democrat. Fleischmann has talked to Gilchrest about her interest in his seat. “I asked her what votes she would have cast differently,” Fleischmann said. “She said, ‘None.’ ” 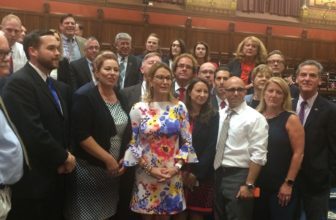 “It’s bigger than the issues he supports or votes for,” Gilchrest said.”It’s about being a strong leader and representing the town of West Hartford, and a lot of people are asking, ‘Where’s Andy?’ ”

Fleischmann won the seat in 1994, succeeding Miles Rapoport, a Democrat who was elected secretary of the state that year. If Fleischmann does not seek a 13th two-year term in the safe Democratic district, Gilchrest can expect competition for the Democratic nomination. If he does, Gilchrest would have to make the case to fellow Democrats why he should be denied nomination.

Flexer said intra-party conflicts are inevitable. As a member of the Senate Democratic caucus, she made clear before taking charge of Emerge Connecticut that the group would not endorse one Democrat over another — even if it might train one.

“Emerge occupies a narrow space,” said Flexer, a former Democratic town chair. “We recruit, train and mentor, then graduate them. We do not endorse.”

It is a distinction that may not matter to a Democratic incumbent challenged by a woman trained and mentored by her organization.

Republicans, for their part, are not conceding the women’s vote.

House Minority Leader Themis Klarides, R-Derby, said she welcomes a new interest in women running for the legislature, even if they are Democrats. But she notes House Republicans have more women — 22 of 72 members — than any other caucus (21 of 78 House Democrats are women), and she is the only woman leading a legislative caucus.

In the Senate, two of 18 Republicans and seven of 18 Democrats are women.

“It’s always healthy to have people run, so that’s good,” said Senate GOP leader Len Fasano of North Haven. “Whether it’s women, minorities or whatever, the whole point of it is you bring different views to the table.”

Simanski, the Granby Republican, said the voters of his district will benefit from a contested race, especially when the candidates differ on the issues.

Simanski is a conservative who voted against repeal of the death penalty, decriminalization of possession of small amounts of marijuana, legalization of medical cannabis, the post-Newtown gun-control law, two minimum-wage increases and a mandate on some private employers to offer paid sick days.

“I think it’s an admirable thing,” Simanski said of running for office. “I think people in the district should have the opportunity to make a decision based on what people represent. It’s nice to run unopposed, but I think it’s best for constituents to have a choice. I welcome Amanda Webster in the race.”

Connecticut's AFL-CIO is about to get a millennial as president and a Black woman as executive vice president.