Legislators “refused to discuss it (transportation) in non-election years. Give me a break,” Malloy told reporters while outlining new transportation projects at the CT fastrak station on Main Street in New Britain.

“I’m tired of hearing people say why can’t we be more like other states when the other states they’re talking about are making massive investments in transportation which we refuse to make,” the governor added. “Stop running away from your job.” 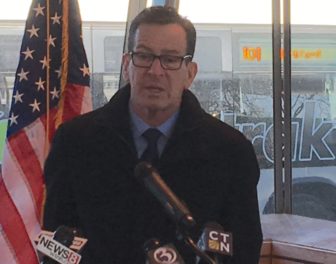 Gov. Dannel P. Malloy, at the Main Street CT fastrak station in New Britain, urged legislators to “stop running away from your job.”

The governor, who must recommend adjustments to the 2018-19 state budget when the next regular General Assembly session starts on Feb. 7, has not disclosed any specifics to date.

But Malloy clearly has laid down the challenge for a robust transportation debate in his final year in office. He is not seeking re-election to a third term.

The governor warned Wall Street last month that the new state budget short-changes the transportation program, which is headed for dramatic contraction over the next five years.

Connecticut would need to scrap some rail services, drive up rail and bus fares, reduce infrastructure maintenance, suspend as much as 40 percent of planned capital projects and defer major highway rebuilds like the Hartford viaduct.

Some of these cutbacks would have to begin as early as 2018, absent more funding.

Department of Transportation Commissioner James Redeker said unless something is done, “it will not be the kind of system that will support future economic development.”

The commissioner added that, “It is not about the short-term impacts that we really should be thinking about… it is about the destiny and future of our economy.”

After his presentation to Wall street credit-rating agencies, Malloy made his pitch for a 2018 transportation debate through a series of December speaking engagements before business leaders and a new panel studying state budget challenges.

Legislative leaders responded, for the most part, in general terms earlier this month about the need to strengthen the Special Transportation Fund at some point. House Speaker Joe Aresimowicz, D-Berlin, went one step further calling for a debate now. 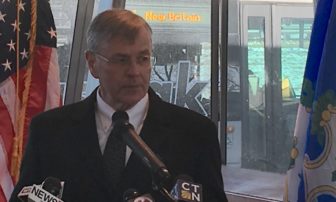 Transportation Commissioner James Redeker said Connecticut needs to think about the future of its economy.

“Maintaining and updating our outdated transportation infrastructure is critical to our future economy,” he wrote in a Dec. 7 statement. “I still believe a modern electronic toll system and less reliance on the gas tax has to be part of the equation to help get us back on track in the long term, and intend to have a vote on tolls this upcoming session.”

The legislature has endorsed a new legal “lockbox” provision to try to ensure revenues dedicated for transportation cannot be redirected for other purposes.

A proposal to add this as an amendment to the state Constitution will go before voters on the ballot this November.

But the governor, who supports the “lockbox,” said lawmakers also have had options for bolstering transportation funding laid out for nearly two years now.

Malloy was referring to his Transportation Finance Panel. A study group of transportation advocates, the panel issued a January 2016 report that laid out options to raise an estimated $42 billion collectively over 30 years.

“We need to get going and undo the decades of under-investment in our state,” Mallloy added.  “We need to make the necessary tough choices to fix and improve our infrastructure.”