A northbound Metro North train pulls into the Darien train station as commuters wait for the next train into New York on the southbound platform.

As Connecticut prepares for a major bond sale next month to finance transportation improvements, projections sent recently to bond-rating agencies show the new state budget won’t prevent the Special Transportation Fund from falling into a series of annual deficits starting in July — or from reaching insolvency by mid-2020.

And while insolvency isn’t expected for another two and a half years, some cutbacks — including a reduction in Shoreline East rail services — might be necessary as soon as next May, Department of Transportation officials warned.

“Without significant new revenue, the only way to balance the STF and operate DOT is to severely cut the operating budget and slash the capital program,” transportation officials wrote last month in a memo to Malloy. 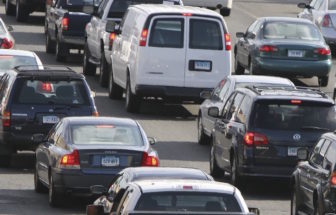 Malloy was scheduled to discuss the transportation crisis with legislative leaders Wednesday afternoon and brief them in detail on Thursday.

Top lawmakers excluded administration officials from the four weeks of negotiations that produced a new, biennial budget plan last month. The governor signed that deal after both the Senate and House approved it with bipartisan, veto-proof margins.

The governor, who proposed a 30-year, $100 billion program to rebuild Connecticut’s transportation system in February 2015, has had limited success since then securing resources for the program.

Most of his time since then has been spent pressing for resources simply to keep the transportation program financially afloat.

About 7 percent of the overall state budget, the Special Transportation Fund — which holds about $1.51 billion this fiscal year — chiefly is used to cover debt payments on transportation-related borrowing and DOT operations.

Lawmakers agreed in the spring of 2015 to dedicate a portion of sales tax receipts to transportation. This was deemed the key to funding the first five years of the governor’s 30-year program, through 2020.

Meanwhile, projected growth in gasoline tax receipts — which has been undercut for years by improving vehicle efficiency — has been downgraded again.

As recently as January, fuel tax receipts were expected to climb 16 percent over the next three years combined. But a new forecast issued two weeks ago reduced that to just under 10 percent. 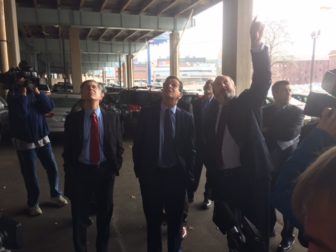 Gov. Dannel P. Malloy in 2015 inspecting the I-84 viaduct in Hartford, which he says needs replacement at a cost of billions.

But debt costs on transportation bonds –involving both outstanding debt and anticipated borrowing in the next few years — are not slowing down as Connecticut tries to reverse decades of deferred maintenance and other infrastructure investment.

If legislators don’t want to raise the revenue to cover those costs, the DOT and the administration say severe cutbacks would be necessary.

Connecticut must demonstrate to potential bond investors that its transportation program has sufficient revenues to cover double its projected capital costs for the next five years.

Given the projected crisis, the administration targeted potential spending cuts and fare increases that it calculates are necessary to restore balance — unless legislators dedicate more revenues to transportation.

The I-84 viaduct in Hartford.