Malloy to nominate McDonald as chief justice of Supreme Court 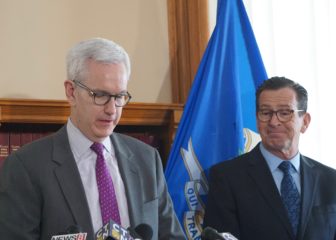 The appointment marks personal and professional milestones for McDonald and Malloy, friends whose careers have intertwined since McDonald served him as a legal adviser during Malloy’s time as mayor of Stamford. With a year remaining in office, the governor is poised to leave a Supreme Court dominated by his appointees.

Malloy, long a strong supporter of gay rights, said McDonald is qualified on the basis of his intellect, temperament and respect for the rule of law, but added, “It also can’t go without noting the national signficance of this nomination.”

As an openly gay candidate, McDonald was a political rarity when he was narrowly elected to the state Senate from Stamford in 2002. Three years later, he helped win passage of a civil-unions law that extended marriage rights to same-sex couples, albeit under a different name. The distinction was erased in 2008 in a decision by the court he now hopes to lead.

McDonald married his long-time partner, Charles Gray, a year later. On Monday, Gray watched Malloy announce his intention to nominate McDonald once the 2018 session opens next month. McDonald said he was struck by the reach of change during his life.

“When I was born here in Connecticut a little more than 50 years ago, loving relationships like the one Charles and I cherish were criminal in 49 states, including Connecticut,” McDonald said. “And when I came out in the early 1990s, I had family members who loved me deeply but so counseled me against pursuing either a career in law or in public service because of the deeply ingrained prejudices held by some people at that time.”

McDonald, 51, who was an influential legal voice as co-chair of the legislature’s Judiciary Committee during his eight years in the Senate, resigned from the legislature to become the top legal adviser to Malloy during his first two years as governor.

He was overwhelmingly confirmed by the General Assembly for his current post, a vote of confidence by former colleagues that McDonald could make the transition from a passionate advocate on a wide range of hot-button issues to a jurist.

McDonald was confirmed by votes of 30-3 in the Senate and 125-20 in the House after a debate in which opponents focused on his lack of previous judicial experience and his sponsorship of a bill in 2009 that Catholics deemed an intrusion into church affairs. It would have made changes in the state’s religious corporations act, which governs the corporate structure of several denominations.

McDonald said he proposed the bill, which would have given parishioners a stronger say in parish finances, at the request of a constituent upset at financial irregularities in two Catholic churches. A bishop called it payback for the church’s opposition to gay marriage.

Rep. Livvy Floren, R-Greenwich, whose House district overlapped with McDonald’s Senate district, said she had no hesitation to support his confirmation in 2013. “His respect for the rule of law of law and his respect for the opinions of others is part of his DNA,” she said then.

On Monday, she attended the press conference announcing his choice as chief justice. She said, “You can use that quote again. I think he’s terrific.”

All 23 legislators opposing his nomination five years ago were Republicans, though the ranking GOP House and Senate members of the legislature’s Judiciary Committee, which screens nominees, pronounced him qualified, as did the leaders of the Republican minorities in the House and Senate.

House Minority Leader Themis Klarides, R-Derby, declined Monday to predict how her caucus would view McDonald’s promotion, which gives him influence over the administration of the state’s courts, not just a voice in the precedents that guide them.

“We’re going to go through the process, and he’s going to be vetted very vigorously through the Judiciary Committee process and through the House and Senate,” Klarides said. “And we’ll see where that is. But chief justice is a big deal.”

A Republican candidate for governor, Tim Herbst, left no doubt he would make McDonald’s nomination an issue, urging legislators to deny him confirmation.

“Justice McDonald, as a former state senator and political advisor to Dan Malloy, demonstrated a partisan streak that continued as Gov. Malloy’s chief legal counsel for two years,” Herbst said. “McDonald had no judicial experience when he was nominated to the Supreme Court by this governor. If John Rowland or Jodi Rell nominated their best friend and political advisor to serve as the chief justice of the Connecticut Supreme Court, they would have been rightfully excoriated by the political opposition and likely criticized by those in their own party.”

The Malloy administration appears not to be taking his confirmation for granted. By mid-afternoon, it had released endorsements from political and legal figures, including the head of the Connecticut Bar Association and the deans of the law schools at UConn and Quinnipiac.

“Justice McDonald has dedicated his career to public service, championing social justice, and safeguarding fairness and equality,” said Karen DeMeola, president of the bar association. “I look forward to continuing the partnership between the Connecticut Bar Association and the Judicial Branch in ensuring access to justice, increasing diversity and inclusion in the bar and bench, and ensuring civility within the profession, which began under Chief Justice Chase T. Rogers.”

As a justice, McDonald joined in two decisions eliminating the last vestiges of the death penalty, which had been repealed by the legislature for future crimes. The case was an issue raised in the confirmation of Justice Richard N. Palmer, who wrote the first opinion, to his latest term on the court.

In a 4-3 decision in 2015, the court lifted the death sentences of the men who had been sentenced before the legislative repeal, concluding that carrying out the sentences “would violate the state constitutional prohibition against cruel and unusual punishment.”

The retirement of one of the four justices, Flemming L. Norcott Jr., and an appeal by the state led to an unusual reconsideration of a major decision by the court. By a 5-2 vote, the court affirmed its previous opinion.

Judges and justices in Connecticut are gubernatorial appointees, nominated by the governor and confirmed by the General Assembly to eight-year terms. Absent questions of competence or temperament, jurists in the state traditionally are reappointed until the mandatory retirement age of 70.

McDonald is a graduate of Cornell University and the University of Connecticut School of Law. Before becoming the governor’s general counsel, McDonald was a litigation partner at Pullman & Comley, where he chaired the firm’s appellate practice.

McDonald is one of four justices appointed to the Supreme Court since the 1970s without prior service on a lower court. The others: Ellen Ash Peters, a Yale professor chosen by Gov. Ella T. Grasso in 1978 as the first woman to serve on the court; Palmer, who was chief state’s attorney when named to the court by Gov. Lowell P. Weicker Jr. in 1993; and Gregory T. D’Auria, who oversaw the appellate division of the attorney general’s office as solicitor general when nominated by Malloy in February 2017.

Five of the current seven justices are appointees of Malloy. The exceptions are Rogers, whose resignation is effective Feb. 5, and Palmer.

If McDonald is confirmed as chief, the governor will have one final vacancy to fill. Malloy said he has not decided on a nominee.