House Democrats back to 79 with arrival of Bobby Gibson 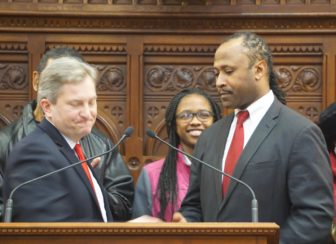 Bobby Gibson, right, prepares to take the oath from Scott Bates, the deputy secretary of the state

The Democratic advantage in the state House of Representatives has grown with the arrival Friday of Bobby Gibson, a Democrat from Bloomfield who won a special election Tuesday, and the resignation last week of Rep. Laura Hoydick, a Republican who is the new mayor of Stratford.

Gov. Dannel P. Malloy issued a writ Friday that schedules a special election for Feb. 27 in the 120th House District, covering the central third of Stratford. History is repeating itself: Hoydick won the seat in a special election eight years after her predecessor, Republican John Harkins, was elected mayor.

Gibson, 51, a middle-school teacher and former high-school football coach in Bloomfield, was sworn in Friday, succeeding Rep. David A. Baram, D-Bloomfield, in the 15th House District of Bloomfield and a portion of Windsor. Baram resigned to become a probate judge.

“I’m looking forward to starting work right away,” Gibson said. “We had a lot of trials and tribulations, but we worked hard. We never lost our faith. And we stuck to the plan, and we did what we had to do.”

To win, Gibson had to convince voters to look past his arrest Nov. 16 on a charge of driving under the influence. His opponent in the special election was Joseph Suggs, the former Bloomfield mayor and state treasurer, a Democrat on the ballot as a petitioning candidate.