Ned Lamont, who failed to beat Malloy, joins race to succeed him 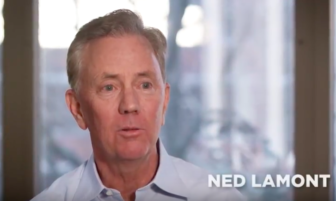 Ned Lamont in a campaign video

Ned Lamont, who burst into politics with an antiwar campaign against Sen. Joseph I. Lieberman a dozen years ago, opened a campaign for governor Wednesday with an early-morning email blast and a two-minute, slickly produced video calling Connecticut a beautiful state “that’s been failed by the political class for 30, 40 years.”

Lamont, 64, the scion of a wealthy family and founder of a niche cable television company, Lamont Digital Systems, that serves college campuses, is making his second run for governor as he joins an unusually wide-open race to succeed Gov. Dannel P. Malloy, giving the Democrats a well-known candidate who has run two statewide races, falling short each time.

In an interview, Lamont said Connecticut was hungry for a candidate willing to make fundamental change in how the state does business, and he promised a bolder campaign than he waged for governor in 2010, when he decisively lost a two-man Democratic primary to Malloy, despite outspending him.

“I’ve always broken a little china. I kind of enjoy breaking china,” Lamont said. “I did it in my business. I did it in the Joe Lieberman campaign. And I was ready to do it in 2010. People weren’t ready to break china then. I think they are now.”

What Lamont is willing to smash in the name of rebooting the state’s finances and its economy is unclear. He embraced electronic tolling to finance overdue transportation infrastructure ,  expressed an openness to expanding the sales-tax base and said he believed there is a widespread willingness to accept sacrifice — if it leads to stabilizing the state’s finances and sets the stage for economic growth.

“We go through this constant budget hell, and it’s making everybody as nervous as a cat on a hot tin roof. And there is a sense we’re never going to get out of it. So I feel it’s a very different place than 2010,” Lamont said. “My prescriptions are not all that different. I’m still going to be the candidate who’s willing to make the big changes we need to do on revenues, on infrastructure, on how we deliver services. I want to make it aspirational.”

Lamont is comfortable with the status quo on the question of how Connecticut sets its contracts with state employees and the level of compensation for current employees, which he says is sustainable after concessions in 2011 and 2017 that raised retirement ages and the level of employee contributions to their pensions.

“I think labor knows me a lot better than they did. I think they know I’ve got their back,” Lamont said. “I think they understand that.”

The state’s unfunded pension and retiree health liabilities are the result of governors and legislators being “willfully negligent” in failing to make actuarially required contributions to the state’s pension fund, he said.

“That’s the problem. The problem is not our current employees,” he said.

Lamont, an entrepreneur who sold his digital company 3½ years ago, said he was best-positioned among Democratic candidates to attract businesses and convince them they would have a stable and willing partner in his administration.

In the video announcement, Lamont promised to grow jobs, while appealing to the Democratic base by supporting a $15 minimum wage, decrying President Trump’s assault on the Affordable Care Act, and promising to “make sure women are in key decision-making roles.”

“Right now, you’ve got Donald Trump, who is trying to cut back on people’s health insurance, and we should be thinking about paid family and medical leave,” Lamont said.

The video was produced by Dan Kully of KullyStruble, a Seattle-based political consulting firm with a long client list of successful Democratic campaigns for Congress and governor. He has not named a campaign manager.

The announcement was expected. Lamont acknowledged to the CT Mirror last week he was polling and would make his intentions known soon.

Lamont’s campaign against Lieberman, a Democrat who supported President George W. Bush’s invasion of Iraq, drew national attention as a referendum on the war. Lamont won the Democratic nomination in a primary, but lost to Lieberman, who competed in November as a petitioning candidate.

Lamont began the Senate race as the ultimate outsider, whose previous involvement with elective politics was serving as a selectman in Greenwich and financially supporting others. He quickly raised hundreds of thousands of dollars in online contributions from across the U.S., but he ultimately underwrote the campaign, spending nearly $20 million.

A campaign for governor in 2010 never generated the same excitement among the young and liberal activists who flocked to him in 2006. Polls showed him as the favorite from start to finish, but he lost to Malloy, 103,154 to 77,772.

One issue was Lamont’s decision to largely self-fund his campaign against Malloy, the first gubernatorial candidate to qualify for public financing under the state’s voluntary Citizens’ Election Program. Lamont spent $9.65 million on the primary, while Malloy was limited to a budget of less than $3 million — a public grant of $2.5 million and $250,000 in qualifying funds Malloy raised.

He will not seek public financing this year, said Juliet Manalan, a spokeswoman. Lamont supports the goals of the program, which limit participants to maximum contributions of $100, but he declines to accept taxpayer funding, she said.

Lamont said he is willing again to use his personal wealth to underwrite his campaign, but he also intends to demonstrate broader support by raising $250,000 — the threshold for qualifying for public financing — in small donations.

Lamont enters a 2018 contest in flux.

The first Democrat in the race, Middletown Mayor Dan Drew, recently quit, struggling to raise money and facing the prospect of new competition from Lamont and two others now raising money with exploratory campaigns, former Secretary of the State Susan Bysiewicz and Hartford Mayor Luke Bronin.

Nearly a dozen Republicans have demonstrated the ability to raise the money to compete for the GOP nomination. The most recent candidates’ forum sponsored by the state Republican Party drew nine candidates to the stage.

But no one holding statewide or congressional office has been drawn to the prospect of winning a job in which the winner will be confronted by a stagnant economy, a crippling unfunded pension liability, a transportation fund on the brink of insolvency, and chronic budget shortfalls.

“Business people are measured by their results and Connecticut needs results right now,” Lamont said. “We’ve got to change how we do businesses. More good-paying jobs, more companies moving into Connecticut that attract talent, more leaders willing to come together to find common ground, fix our budget, and get our state moving again. We have serious issues to address and our leaders will need to tell the truth about how we are going to solve our biggest problems.”