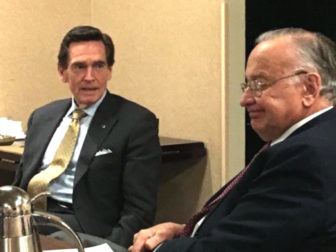 Given just two months to address deep-rooted fiscal problems neglected by generations of Connecticut politicians, the co-chairs of a new study panel are undaunted, insisting the political establishment has reached a tipping point and is ready for change.

The Commission on Fiscal Stability and Economic Growth, the latest in a series of blue-ribbon groups to poke and prod state government, has a deadline of March 1 to make its prescriptions to a closely divided legislature struggling to avoid another budget deficit in an election year.

“We want to make sure that people understand why we exist, and it is not to cut spending and lower taxes,” said Smith, who recently retired after 30 years as the chief executive. “It is to make recommendations for a structural, fiscal framework within which better budgeting decisions can be made, that can bring us to fiscal stability.”

History weighs heavily against them.

The patient proved resistant, though not quite immune, to change, according to Lesley DeNardis, a professor of government at Sacred Heart University and the daughter of former Congressman Larry DeNardis, a frustrated reformer while a member of the General Assembly in the much-studied 1970s.

“A review of Connecticut’s experience with state reorganization demonstrates that despite the concerted effort by both the executive and legislative branches to alter administrative structures, reorganization recommendations are seldom implemented due to the opposition of the state legislature and interest groups,” the professor concluded in a paper published in 2011.

The income-tax fight 26 years ago stands apart in that it did produce structural, once-in-a-generation changes in how Connecticut pays for its government and constructs its budgets. But striking is how many issues raised in 1991, including questions about the sustainability of teacher pensions and state aid to municipalities, are points of contention today.

Gov. Dannel P. Malloy, who recently began the last of his eight years as governor, stunned cities and towns last year by demanding they contribute $400 million toward the cost of teacher pensions, a local function whose employer contribution is made by the state, and trying to focus education aid on its 30 neediest school systems. But those proposals were hardly new.

In 1991, the Thomas Commission wrote of teacher pensions: “A more equitable sharing of these costs should be studied. Adding increased urgency to this situation is the fact the fund is actuarially under-financed.”

“My take is we didn’t learn our lesson back in 1991,” said Senate Republican leader Len Fasano of North Haven. “The answer is not to continue raising revenue. The answer lies in fiscal prudence.”

One of the reforms made in 1991, the adoption of two-year budgeting, was intended to nudge governors and legislators into taking a longer-term view of the state’s finances, said Brian Flaherty, a state lawmaker then who is now a vice president of the Connecticut Business and Industry Association.

“When lawmakers are making short-term decisions, and when budget-making becomes about just making sure revenues equal expenditures, the policy-making gets lost in the shuffle,” Flaherty said. “Before you look if this is a blue state or a red state, you have to look at these influences. They lead to short-term thinking.”

On that measure, the reform was a failure. Few politicians in Connecticut have demonstrated a willingness to forgo short-term political considerations in favor of long-term reforms.

Responsibility is shared by a succession of governors, most recently two Republicans who skipped pension payments to avoid unpopular budget options, Democratic legislative leaders who failed to act on the metastasizing threat of unfunded pension and retiree health liabilities, and rank-and-file lawmakers of both parties who consistently shied from implementing blueprints for structural change.

“I can say with a straight face, regardless of political party, regardless of executive branch versus legislative branch, there has been a lack of action in the structural areas and a real identifying of what Connecticut and what we’re going to do moving forward for 40 years,” said House Speaker Joe Aresimowicz, D-Berlin. “All parties can accept some of the blame.”

So what accounts for the optimism of Patricelli and Smith?

“The depth and dire nature of the problem are sinking in,” Smith said, “and I think all of the legislators, individually and collectively, have a better appreciation for how difficult that situation is now than they did before, recognizing that right now 25 cents of every dollar of revenue is going to fund the unfunded legacy liabilities and to debt service.”

The list of subjects they intend to examine is packed with topics that defy easy solution.

“We can only focus on the hardest things, frankly, that the political system has had great difficulty in coming to terms with,” Patricelli said. “Don’t look to us to solve the question of how much money UConn should get. We’re not going to do that.”

The last topic is of particular concern to Gov. Dannel P. Malloy, who pressed the panel earlier this month to help him make the case that Connecticut must reverse decades of insufficient investments in transportation.

Compared with transportation spending in neighboring states, “We’ve done a tiny fraction over the last 40 years of what they’ve done,” Malloy said.

That lack of investment has contributed greatly to Connecticut’s lack of job growth over the past three decades, the governor says, particularly in the financial services sector.

“There’s a reason we’re not getting our share of job growth out of the New York City market any longer,” Malloy said.

While not discussing what transportation-related recommendations might be made, Smith agreed with Malloy that some businesses have lost confidence that Connecticut is taking its transportation challenges seriously.

“If you don’t get economic growth, the gap between the revenue and the expenses will remain so wide that it will take us down,” Smith said, adding that shrinking this gap “is a necessary condition for the business confidence that stimulates business investment” in jobs and capital.

Not likely, said, Patricelli, who led the federal Urban Mass Transportation Administration in the late 1970s under President Ford. The UMTA was the forerunner of the present-day Federal Transit Administration.

“We’ve recognized from the outset that an effective, forward-looking transportation system is absolutely key to economic growth,” he said.

If this list of topics is not challenging enough, Smith and Patricelli said they are considering adding one more question to the list: Has Connecticut outgrown a part-time legislature?

“We have a poorly paid, part-time legislature in the face of world-class problems,” Patricelli said. “Look at the states around us. Every legislature east of the Mississippi is in session right now.  I think it would be hard for any group of legislators to deal with the serious problems we have in four or five months a year.”

With the regular 2018 legislative session running just over three months — from Feb. 7 to May 9 — the co-chairs are confident legislators will give their report a thorough debate, and vote on at least some of the recommendations.

The hope is this also will shape state candidate debates throughout the summer and fall.

“We have worked hard to create the mutual expectation with the legislative leaders that they are going to step up to the plate and vote,” Patricelli said. “Now we’ll see how that plays out.”

“If we thought we were just making a report that they would just put on a shelf, there wouldn’t be a commission,” Smith said, adding that that the fiscal stability panel “may be our last, best chance to retain business confidence.”

Members of the Commission on Fiscal Stability and Economic Growth