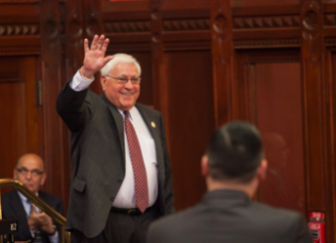 Rep. Danny S. Rovero will be making a final goodbye in the House this year.

Rep. Danny S. Rovero, D-Killingly, a fiscal conservative who repeatedly has broken with his caucus on budget votes, announced Monday he will not seek re-election this fall from the Quiet Corner of northeast Connecticut, a blow to Democrats trying to maintain a fragile majority in the state House of Representatives.

“I would imagine that entire area will be in play, and we will spend a lot of time working with candidates, recruiting and helping them,” said House Majority Leader Matt Ritter, D-Hartford. “But Danny’s talked to a few people who are credible and who might pull it off.”

Rovero’s retirement appears to give the Democrats, who can afford a net loss of no more than three seats, at least three open Democratic seats to defend in districts where the GOP is expected to be competitive. From a low of 37 seats in 2008, the Republicans have steadily gained, winning 72 seats in 2016 — just four short of a majority.

“There’s going to be tough seats for both sides,” Ritter said. “At the end of the day, it’s going to come down to what it always comes down to — how hard will you work, and what’s your message.”

On the other side of the state, Rep. Linda Gentile, D-Ansonia, announced her retirement three weeks ago from the 104th District of Ansonia and Derby in the Naugatuck Valley, which has been solidly trending in favor of Republicans. Outside of Waterbury, she is the last House Democrat in the valley.

The third Democratic seat likely to be open is the 147th District of Stamford and Darien. The incumbent, Rep. William Tong, D-Stamford, who has an exploratory committee raising money for an undetermined statewide office, is expected to run for attorney general. Tong unseated a Republican in an upset 12 years ago.

“Tong’s the district that keeps me up at night,” Ritter said.

Several seats in rural eastern Connecticut have flipped back and forth. In 2014, the year after passage of gun controls drafted in response to the Sandy Hook School massacre, the GOP picked up seats, only to lose some of them two years later.

In the 40th House District of Ledyard and Groton, former Rep. John Scott, a Republican who lost to Democrat Christine Conley in 2016, has filed papers for a rematch. In the 44th House District of Killingly and Plainfield, Democrat Christine Rosati Randall is trying to make a comeback against Republican Anne Dauphinais, who unseated her the same year. 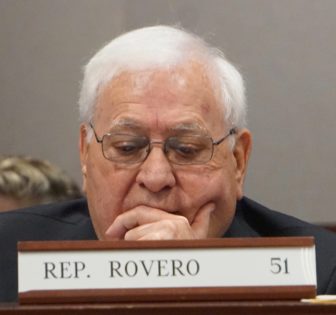 Rovero, a small business owner with decades of service in local office in Putnam and Killingly, won the open 51st District seat in 2010, succeeding Democrat Shawn Johnston. The district includes Killingly, Putnam and Thompson and borders Massachusetts to the north and Rhode Island to the east.

“It has been a tremendous honor and privilege to serve as the 51st District House representative for eight years,” Rovero said. “I’ve always given my best effort to this position – and enjoyed many times being the first person to show up early at the Capitol on Monday morning ready and willing to work for the people of my district. But with Killingly more than 50 miles removed from Hartford, the travel and demands of this job have started to take its toll, and I am afraid my health will no longer allow me to represent the district to the best of my ability.”

His retirement will end a half century in public service. He has service on a local recreation committee, a city council, a board of selectmen, a police commission and was Putnam’s chief elected official for 14 years, before moving to Killingly.

“I love that man. He’s been a very good mentor and friend. And he’s brutally honest,” Ritter said. “I’ll miss him.”

In his first year, Rovero voted against a tax increase of about $1.8 billion that Gov. Dannel P. Malloy, also in his first year in office, said was necessary to help erase an inherited deficit of $3.6 billion. He broke with Democrats over budgets again in 2015, 2016 and 2017.

Rovero sided with business in opposing a law mandating that certain private employers offer paid sick days, but he voted for bills in 2013 and 2014 that raised the minimum wage.