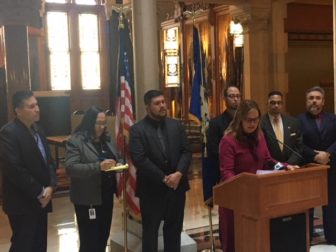 Secretary of the State Denise Merrill announcing a voter registration drive directed at displaced Puerto Ricans. Chris Rosario is on her right.

Secretary of the State Denise Merrill is working with the legislature’s Black and Puerto Rican Caucus and community groups on a voter-registration drive directed at Puerto Ricans who have resettled in Connecticut after being displaced by Hurricane Maria.

Two of them are the father and stepmother of a Puerto Rican woman who may challenge her re-election in a bid to become the first Hispanic elected to statewide office in Connecticut.

The voter-registration drive announced Wednesday comes as Merrill, a Democrat seeking her third term this fall, faces the prospect of a challenge for the nomination from Eva Bermudez Zimmerman of Newtown, the secretary of the Democratic State Party. Zimmerman lost a race for the state House of Representatives in 2016.

Zimmerman said she is seriously considering opening an exploratory campaign committee to test her viability as a candidate for an undetermined statewide office, which would include secretary of the state. If she were to open an exploratory committee, she first would resign from her post with the state party, she said.

Her father and stepmother, Pedro Bermudez and Janette Hernandez, are among the hundreds of Puerto Ricans who have relocated to Connecticut. The two retired Hartford educators own a home in Yabucoa, P.R., where the hurricane came ashore with sustained winds of 155 miles per hour.

“I don’t think it’s ironic,” Zimmerman said of the news conference. “But I think it’s wonderful that she had it. It’s a positive step forward.”

Karen Talamelli Cusick, the Democratic town chair of Woodbridge, opened a campaign for secretary of the state in July, before Merrill announced her candidacy for a third term. Cusick has raised $13,960

“It’s a democracy,” Merrill said Wednesday night. “People are free to run and tell their story and make their case. I think it will be difficult to attack my record.”

Merrill has raised $30,590. To qualify for public financing for secretary of the state, a candidate must raise $75,000 in contributions of no more than $100 each. Merrill and Comptroller Kevin P. Lembo are the only statewide constitutional officers seeking re-election. Gov. Dannel P. Malloy, Lt. Gov. Nancy Wyman, Treasurer Denise Nappier and Attorney General George Jepsen are not.

Merrill was joined at the press conference Wednesday by several Puerto Rican politicians, including Rep. Chris Rosario, D-Bridgeport, the chairman of the Black and Puerto Rican Caucus. A spokesman for Merrill said the voter drive and press conference had no connection to the potential challenge.

“Connecticut is happy to welcome our neighbors from Puerto Rico who have moved to Connecticut after Maria, and my office stands ready to help these families join in the civic life of their new communities by registering them to vote,” Merrill said. “U.S. citizens do not lose their right to vote just because they lost their homes to a devastating natural disaster. In fact, by registering to vote in Connecticut, these families will now be able to vote in federal elections, and have more of a say in public affairs.”