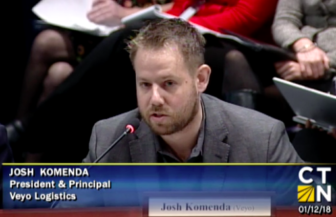 After having experienced some hours-long wait times, Medicaid patients haven’t had to wait longer than 15 minutes for someone to pick up the phone when calling about medical transportation in the last two weeks, according to Josh Komenda, president of Veyo, the state’s new non-emergency medical transportation contractor.

But that figure was challenged by several members of the Medical Assistance Program Oversight Council (MAPOC) at its meeting on Friday, where Komenda and other Veyo representatives appeared in front of the panel for the second time in the last month.

The San-Diego-based company has been the subject of many complaints since Jan. 1, when it started to run the program, which provides about five million rides each year to Medicaid patients, including children and adults.

Residents have missed or been late for critical medical appointments, like dialysis, chemotherapy and behavioral health treatment. Others have been stranded at medical facilities when return rides ran hours late or didn’t arrive. The state Department of Social Services oversees the transportation program.

“We’re very clear that this has been a bumpy transition. It’s been very disruptive and painful for a lot of folks. We’re deeply regretful of that,” Komenda said on Friday. “I also do want to talk and provide some encouraging news; we’re making very significant progress and have very positive momentum.”

Komenda told the council that it took on average about three minutes for an agent to answer a call this week, down from 29 minutes during the week of Jan 1. When asked for a range, Komenda said that the longest wait time in the last two weeks had been 15 minutes.

The Connecticut Hospital Association has hosted two private meetings with Veyo and health care providers from across the state — the most recent on Tuesday.

“In the two meetings we’ve had about a month apart, anecdotally, we did see improvement in call time waits,” said Karen Buckley, the hospital association’s vice president of advocacy. “I’ll also say anecdotally that the meeting we had Tuesday did not reflect the call time values that (Veyo) shared today.

“We had gone from a room of about 100 people raising their hands of waiting over an hour or two in January to only a handful of those folks this time, and most folks having phone call pickup times between probably 15 minutes and 45,” she said.  “So I do think there is improvement. I still think there’s lots of improvement to go.”

Tracy Wodatch, vice president of clinical and regulatory services at the Connecticut Association for Healthcare at Home, has been reaching out to the association’s 65 providers every few weeks to check in about Veyo. The association represents home health and hospice services provided in the community.

“Last week we had a report of somebody that literally put their headphones on, and their cell phone in their pocket and for three hours cleaned their house while they were waiting for a response,” said Wodatch at the meeting.

A woman was calling for her mother who needed a ride to the doctor, Wodatch said.

In an email after the meeting, Komenda said, it appeared that some people may be referencing situations from previous periods.

“We also have researched such reports every time we have been given a phone number and can see folks and have not been able to find any call as described,” he said. “We have seen folks that have called multiple times, hanging up after 10 minutes or so and dialing back. In these cases, they may be adding up cumulative hold time.”

Before Veyo, the state’s non-emergency medical transportation program was run for several years by LogistiCare — also the subject of many complaints in the past.

Four companies, including Veyo, submitted bids for the job. Veyo was chosen, in part because of lower proposed costs and advanced technological approaches to delivering the service, according to state documents.

After the January MAPOC meeting, DSS Deputy Commissioner Kathleen Brennan wrote to Komenda to outline the issues that needed to be addressed and the contractual requirements that weren’t being met.

Attached to the letter was a corrective action plan, which detailed the contractual requirements Veyo was not complying with, which included answering within three minutes 80 percent of incoming phone calls during business hours.

On Feb. 6, Veyo wrote its response to the plan, which included what work the company has done to address the contractual issues. This has included hiring more call center staff and holding more training programs.

According to DSS, the department hasn’t approved the plan with Veyo’s responses and “continues to work with Veyo to finalize a complete submission, as quickly as possible.”

For the most part, sanctions are suspended for the first 60 days of the contract. Veyo was fined $1,000 after a patient was transported with others in the vehicle, when he or she wasn’t supposed to be in vehicle with others for medical reasons.