On guns, the GOP candidates for governor fall silent 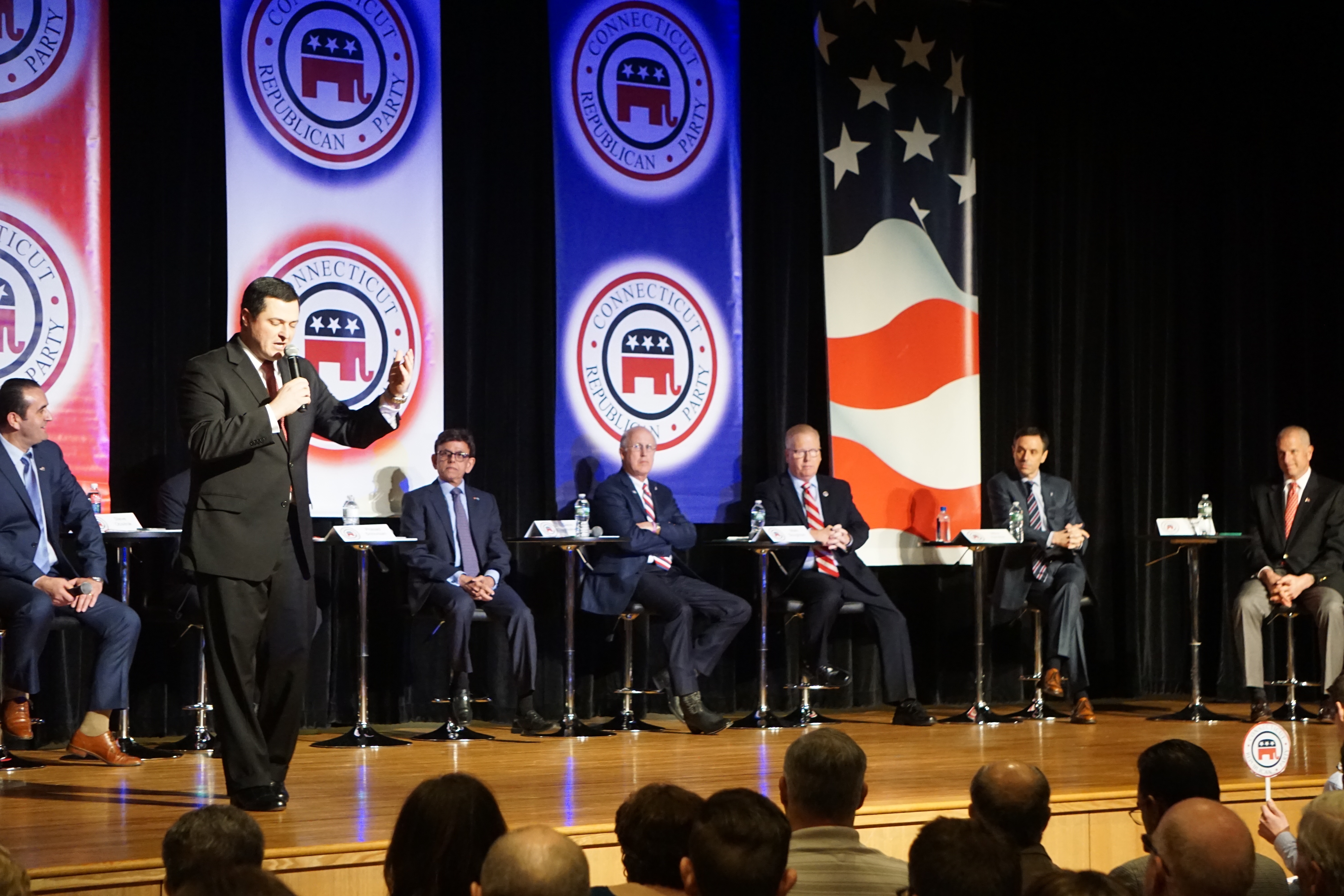 West Haven — The shooting deaths of 17 high school students and staff in Parkland, Fla., briefly focused eight Republican candidates for governor Wednesday night on the question of whether they would stand by or revise the sweeping gun-control measure passed in Connecticut five years ago after the massacre of 20 first-graders and six educators in Sandy Hook.

No one called for changes in the ban on the sale of large-capacity magazines, AR-15s and other military-style semi-automatic weapons or the background checks required on purchasers of firearms and ammunition. In fact, seven of the eight declined an invitation to say anything about the gun control law that was a major issue in the GOP’s 2014 primary for governor.

One of the candidates, state Rep. Prasad Srinivasan of Glastonbury, who had expressed regret to The Courant about his vote for the Sandy Hook law, was challenged to explain his change of heart. But Srinivasan told reporters earlier Wednesday he would change nothing about the gun controls.

“I would leave it the way it is,” said Srinivasan, an allergist serving his fourth two-year term in the part-time General Assembly. He explained his earlier statement of regret Wednesday night as a reflection of what he sees as the state’s failure to adequately invest in school security and mental health.

The debate at Notre Dame High School before an audience of more than 500 people was the third of five monthly forums for GOP gubernatorial candidates sponsored by the Connecticut Republican Party, one in each congressional district, in the five months before the nominating convention in May. The next is March 7 in New Canaan.

The reluctance to reach out to gun owners was notable, given the role they are believed to have played in the GOP primary in 2014, when state Senate GOP leader John McKinney’s vote for the Sandy Hook law dogged him in his losing campaign to Tom Foley. But it also probably reflects that pro-gun passions have cooled; no lawmaker has even proposed repeal or revisions this year.

“They’re not going to be rolled back in Connecticut,” Gov. Dannel P. Malloy said Wednesday morning, when asked about Srinivasan’s apparent reversal on gun control. “This is an attempt to garner extreme right voters in a Republican primary. It is nothing more than that, quite frankly, I think it disqualifies the gentleman. How could you ever believe him about anything he says?”

None of the Republicans were as sharp as Malloy, a Democrat who pushed for passage of the law and has portrayed it as a national model, in their criticism of Srinivasan.

Getting a seat on stage required being a declared candidate and having raised at least $125,000, the midpoint to the $250,000 in small-dollar contributions necessary to qualify for public financing grants of $1.25 million for a primary and $6 million for the general election. 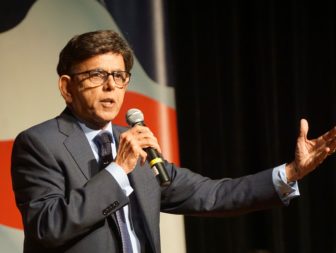 Prasad Srinivasan faced questions about his position on gun control.

Both have exploratory committees allowing them to raise money that can be used to campaign for General Assembly or any of the state’s six constitutional offices: governor, lieutenant governor, secretary of the state, comptroller, treasurer and attorney general.

Boucher used the exclusion in a fundraising appeal emailed shortly before the forum, and it allowed Lauretti a moment to say he favored inclusion: He offered Boucher, who was in the audience, his place on stage.

“This can’t happen,” said the moderator, Ann Nyberg of WTNH, Channel 8, making clear she would enforce the rules set by the GOP.

Lauretti stayed on stage. Boucher kept her seat in the audience.

The forum opened with a question about how the candidates would protect students against mass shootings. All talked about the need to take a comprehensive approach, including security and funding for mental health programs.

“A deadly weapon is made deadly by a deadly person,” Herbst said.

Lumaj said he would issue an executive order requiring security in every school.

Lauretti, who says he witnessed three shootings when he was a teacher and coach in Bridgeport, bemoaned the deterioration of the American family: “When parents are not diligent in parenting…you pay a price for that.”

Boughton, who ended his previous run for governor before the primary in 2014, also faced opposition that year form gun owners over his membership in a gun-control group, Mayors Against Illegal Guns. Boughton quit the organization that year in April. He did not revisit that decision Wednesday night.

It was a relatively mild affair. The candidates broke little new ground, with most repeating their pledges at earlier forums to be more aggressive in negotiating with public employees. All agreed, as in the past, that the biggest challenge facing Connecticut was its unfunded pension liability.

Only Herbst and Lumaj came close to criticizing the rest of the field. Herbst suggested to the audience that some of the candidates on stage lacked strength of character.

He said later he was talking about several candidates. He offered no names.

Lumaj, who was the GOP nominee for secretary of the state four years ago, derided most of his rivals as career politicians. Lauretti, a mayor for 26 years in a community with a stable tax rate and well-funded retirement system, smiled and replied he had no apologies for his career.