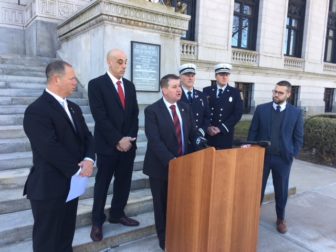 Frank Ricci at the podium. Craig Fishbein is at far left; David Osborne at far right.

The national legal wars over how public-sector unions can collect dues and other fees has reached Connecticut with a lawsuit filed by unionized New Haven firefighters against their statewide affiliate, the Uniformed Professional Fire Fighters Association of Connecticut. The local has the help of the Fairness Center, a firm affiliated with the national right-to-work movement.

Frank Ricci, a New Haven Fire Department battalion chief and president of Local 825 of the International Association of Fire Fighters, announced the lawsuit Tuesday from the steps of the Connecticut Supreme Court, standing with representatives of the Fairness Center and his local counsel, state Rep. Craig Fishbein, R-Wallingford.

The firefighters’ local led by Ricci, who was the lead plaintiff in a federal reverse-discrimination lawsuit that produced a landmark U.S. Supreme Court opinion in 2009, accuses the statewide affiliate in a Superior Court lawsuit of misusing union dues and aggressively trying to collect back dues, despite the local’s vote to disassociate from the statewide organization two years ago.

Ricci said the statewide union misused at least $96,000 in dues paid by his firefighters and then hired a collection agency, Recovery Solutions Group, to pursue $52,000 in unpaid dues, an unsual move that Ricci called harassment. He likened the firefighters’ statewide leadership to scam artists.

“It happens all the time: Spam emails, unsolicited phone calls and junk mail. These scammers intimidate and harass to get their hands on your money without doing the hard work of actually earning it,” Ricci said. “Today, it’s time to add another scammer to that list — the leaders of the Connecticut state firefighters’ union, the Uniformed Professional Fire Fighters Association.”

A twist in the case is the presence of the Pennsylvania-based Fairness Center, which describes itself as a “nonprofit public interest law firm offering free legal services to those hurt by public employee union officials.” It has sued public-sector unions on behalf of disgruntled members, but has never represented one in court — until now.

“This case is about choice, about Local 825’s choice, and they already chose to disassociate from their statewide union,” said David R. Osborne, a lawyer who helped launch the Fairness Center in 2014 and serves as its president and general counsel. “The statewide union should just honor that choice.”

Before attempting to fully sever its relationship, the lawsuit says, Local 825 had a limited affiliation with the Uniformed Professional Fire Fighters, paying the statewide union for representation at the State Capitol. Local 825 had limited rights pertaining to voting on “legislative issues, political endorsements, PAC fund budget, and distribution of PAC fund donations.”

The allegation of $96,000 in misappropriations stem from Local 825’s views that its dues were used for other than lobbying at the State Capitol.

The suit comes at a propitious moment for conservatives in the fight to limit the political influence of public sector unions by attacking their ability to mandate the payment of dues from members and so-called “agency fees” from non-union workers whose wages and benefits are set by union-negotiated contracts.

The U.S. Supreme Court heard oral arguments last week in a case that many court observers expect will produce a decision restricting or ending the ability of unions to compel the beneficiaries of union-negotiated contracts to contribute, either in dues or other fees.

“We feel that this suit will shine a light for the entire state of Connecticut to hold accountable Pete Carozza and the UPFFA … misappropriating $96,000 of our hardworking members’ dues,” Ricci said. “And he’s trying to have us maintain a membership in an organization that doesn’t represent New Haven firefighters’ interests.”

Ricci said he had no hesitation about allying himself with the Fairness Center.

“I think I have a reputation for seeking out expertise and being effective,” Ricci said. “The Fairness Center and our local counsel, Craig Fishbein, have been nothing but effective.”

Lori Pelletier, the president of the Connecticut AFL-CIO, said the dispute was an internal union issue, and the local and its statewide and national affiliates have processes to resolve disputes.

“Why Frank has decided to go outside and make partners wth people who want to see people like Frank and his members not have a union, not have benefits, is befuddling to me,” Pelletier said.

Ricci said Local 825 wants only for the statewide union to honor its members choice, not to undermine collective bargaining.

Ricci was elected president of Local 825 in December 2015. He was one of 18 firefighters who successfully sued New Haven over the city’s decision to set aside a promotion test after no black firefighters qualified for promotion.

The city questioned the validity of the test, while Ricci and the other plaintiffs claimed the decision was discriminatory to whites and Hispanics who qualified for promotion. In a 5-4 decision, the U.S Supreme Court sided with Ricci.

More recently, Ricci broke with the AFL-CIO and the Uniformed Professional Fire Fighters by opposing a bill last year that would have expanded worker’s compensation coverage to include post-traumatic stress suffered by police and firefighters.

Ricci said PTSD should be addressed by employee assistance programs, as is the case in New Haven, not by an unfunded mandate on municipalities.

In an op-ed piece in the New Haven Register, Ricci complained that other unions leaders were misrepresenting his concerns about the bill.

“They employ these tactics to demonize those who disagree with them in an attempt to change the narrative from their flawed legislation to individual personalities,” he wrote. “There are new political realities in Hartford and across the country, and it is time they should take notice.”