DNC gives CT Dems cash to organize and unify for 2018 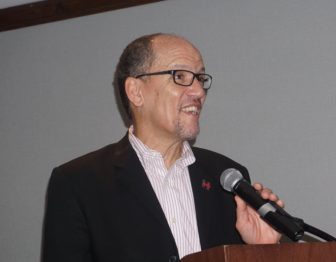 A week after Connecticut Democrats picked up a seat in the state House of Representatives, the Democratic National Committee has added the state party to its list of recipients of competitive $50,000 grants to help organize for the 2018 election.

The money is hardly a game changer for a state party that could afford to spend more than $1.4 million last year and reported $424,371 in available cash in its most recent state and federal campaign finance filings.

But Nick Balletto, the state Democratic chairman, said the grant rewards and reinforces the progress Democrats have made unifying the party since the divisive presidential nomination fight between Hillary Clinton and Bernie Sanders and the election of Donald J. Trump in 2016.

The 63-vote special-election victory last week by Democrat Philip Young in the 120th House District of Stratford was evidence of a party that is coming together, as was its success in GOP communities in municipal elections last fall, he said. Republicans had held the seat for 44 years.

Balletto said previous funding from the DNC helped the state party add two staffers who worked last summer to reach out to the activist groups that emerged in reaction to Trump’s presidential victory and provide a measure of coordination in the 2017 municipal races.

Balletto said many of those groups also contributed to a grass-roots effort that helped Young defeat Republican Bill Cabral, 1,615 to 1,552. The win gave Democrats an 80-71 advantage in the 151-member House. The seat was vacated by Laura R. Hoydick, a Republican who resigned after her election as mayor last fall.

Tom Perez, a labor secretary under Barack Obama who became chairman of the Democratic National Committee in February 2017, announced the creation of the $10 million innovation grant fund in July. The party also committed to making monthly payments of $10,000 to every state party for a year, beginning in October.

“This unprecedented investment in our state parties is the first major step in our effort to get back to basics and rebuild the Democratic Party from the ground up. Democrats across the country are ready to fight to expand economic opportunity and build a brighter future for all Americans – but we have to win elections first,” Perez said then. 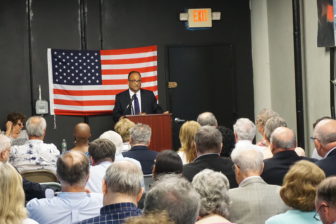 The first of the innovation grants were not announced until January, going  to Arizona, Idaho, Maine, Michigan, Minnesota, Nevada, North Carolina, Pennsylvania, Tennessee, Washington and West Virginia. Connecticut is one of the states to get money in a second round of competitive grants.

“Democrats in Connecticut know we need to start training our great Democratic candidates and organizing on the ground now so we can deliver the results the state deserves in 2018,” Perez said in a prepared statement. “What we learned in 2017 is that when Democrats recruit great candidates, and make meaningful, early investments in organizing and community engagement, we can win anywhere.”

Perez is trying to overcome suspicion that the DNC is nimble enough to help state parties. The identification of the initial grant recipients came days after Vice News reported no state had received money in the six months after announcement of the innovation grants.

Balletto said the so-called SPIF grant — the money comes from the State Party Innovation Fund — is especially welcome in Connecticut, a state that traditionally sends more money to the national party than it receives.

“It’s unusual we would get something of this size,” Balletto said of the grant. “We’re one of the bluest states in the nation, but we have our issues.”

Those issues include an unpopular Democratic incumbent governor, Dannel P. Malloy, who is not seeking re-election after winning close races in 2010 and 2014, and a Republican resurgence in the General Assembly.

The GOP made gains in three of the past four regular elections and held their ground in a fourth. Since winning only 37 seats in 2008, the GOP captured 72 in 2016, just four short of a bare majority of 76-75. In the state Senate, Republicans have grown from holding one-third of the seats to winning an 18-18 tie in 2016.

Balletto said the Democratic Party, buoyed by the special election last week and the 2017 municipal results, now has hopes of growing its House majority and breaking the tie in the Senate, where Republicans are threatening to block the confirmation of Justice Andrew McDonald, who would be the nation’s first openly gay chief justice of any state Supreme Court. The House is expected to vote first on McDonald’s confirmation, most likely on Monday.

The divisions of 2016 are not forgotten, but the close fight for control of the General Assembly has helped to give Democrats’ common cause, he said.

“We’re bringing everybody together, realizing we’re not going to agree on everything. We are Democrats. We have a big tent,” Balletto said.”We just have to have respect for everybody.”