Legislature willing to listen before locking in fiscal restraints

What would happen to Connecticut’s schools and roads if a new recession prompts Congress to decimate federal aid to Connecticut in the coming years?

How would the state respond if poverty pushes more cities besides Hartford to the brink of bankruptcy? 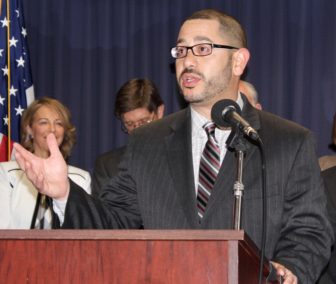 With little time left before Connecticut must legally bind itself to a decade of stringent new fiscal controls — that critics call a budgetary straight-jacket and advocates counter will avert a fiscal collapse— legislators here will ask the public whether they should wait.

Leaders of the Finance, Revenue and Bonding Committee confirmed Tuesday they will hold a public hearing sometime this month on the so-called “bond-lock” process scheduled to begin May 15.

That’s when current law says Connecticut must make contractual guarantees — whenever it borrows funds to finance a variety of capital projects — that several new fiscal capping systems adopted last October won’t be tampered with for at least the next 10 years.

Within the last week, a new state study panel, Gov. Dannel P. Malloy’s administration, and Comptroller Kevin P. Lembo all have asked lawmakers to defer this commitment for a year, so it can be studied — after the November state elections — during the 2019 General Assembly session.

“I’ve certainly read enough and heard from enough folks to know people are concerned about the potential impact,” said Rep. Jason Rojas, D-East Hartford, House chairman of the finance committee. “There’s still time, so I think we should at least study it some more.”

Rep. Chris Davis of Ellington, ranking House Republican on the committee, said he’s confident that the capping systems are vital. But he also acknowledged they were developed chiefly during closed-door, bipartisan budget negotiations last October, and haven’t received a lot of public scrutiny.

“It never had a public hearing last session, and I’m open to having that public hearing,” he said. “Personally I think we could be even tighter with these caps.” 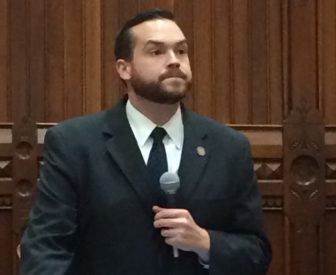 With neither political party able separately to assemble enough votes to adopt a new budget last year that was also acceptable to the governor, Democrats and Republicans ultimately compromised on a number of issues that had been non-starters in the past.

To make sure these caps stay in place, the new budget says the state must pledge not to alter these caps for 10 years in the covenants accompanying bonds issued after May 15. The covenant essentially is a contract between the state and the investors that buy its bonds.

Several progressive policy groups, including 1000 Friends of Connecticut and Connecticut Voices for Children have decried the bond-lock provision. 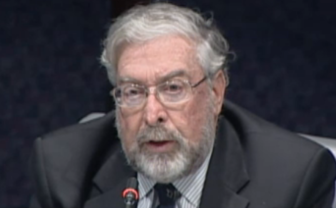 Former Norwalk Mayor Alex Knopp, a member of 1,000 Friends and also a former state representative, dubbed it the “doomsday bond covenant” and “possibly the worst piece of legislation enacted in Connecticut” in more than 50 years.

“It commits the state’s finances to an automatic, irreversible course of self-destruction with no realistic, built-in escape mechanism or effective emergency delay provision,” Knopp said about the bond-lock provision earlier this winter in testimony before the State Commission on Fiscal Stability and Economic Growth.

Connecticut Voices testified before the fiscal stability panel that it would jeopardize the state’s ability to make critical investments in key priorities, including education and health care.

State finances already are projected to be under extreme pressure over the next decade or two as retirement benefit costs surge dramatically because of decades of inadequate contributions.

Critics also charge the bond lock is undemocratic, that it takes power away from future legislatures and gives it to bondholders.

But Sen. John Fonfara of Hartford, the Senate Democratic chair of finance, disagrees.

All of the caps, even if written into bond covenants, allow for exceptions provided the governor and three-fifths of both the House and Senate agree.

For example, when quarterly income tax receipts filed and reported in December and January topped projections by $675 million, the new volatility cap required officials to keep their hands off $665 million of that.

This is especially true, he added, given that deficits of $200 million and $165 million, respectively, are projected for this fiscal year and next — and major shortfalls exceeding $2 billion per year are forecast for the 2020 and 2021 fiscal years.

“The temptation to spend that money is too great for the legislature,” Fonfara said. “We don’t give enough attention to what effect some of our short-term decisions have on the long-term.” 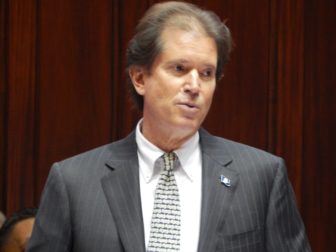 The finance committee’s Senate Republican chair, L. Scott Frantz of Greenwich, agreed that there is strong bipartisan consensus that these spending and borrowing controls need to remain in place.

The only question, he said, is whether the best way to ensure that discipline is through a contractual pledge to bond-holders or through some other means.

“I think it is exceptionally good discipline to have the bond lock as it is written in place,” he said. “But there may be things we overlooked as a legislature, so I think a public hearing is in good order. … We need as much discipline as we can get in the state of Connecticut.”

With its cash-starved retirement benefit programs suffering from decades of neglect, officials from both parties concede it probably will take many years for Connecticut to right its fiscal ship.

But critics of the bond lock say the caps, without sufficient flexibility, might stop Connecticut from paying down its debt more quickly should the economy take off.

They also might stop the state from shielding its most vulnerable from program cuts the general public deems too severe, they said.

The Commission on Fiscal Stability and Economic Growth did not get in the middle of this debate, but did recommend that the issue of locking these caps into bond covenants get a more thorough review. That proposal was one of many in a March 1 report offering a a detailed blueprint to bolster state finances over the long haul.

Malloy’s budget director, Office of Policy and Management Secretary Ben Barnes, suggested to the finance committee last week that it also might want to consult with the next governor on this.

Malloy is not seeking re-election and his term ends in early January 2019.

Lembo, who has been spearheading a push to improve state savings habits and to better manage volatile revenue streams, told The Mirror this week that he appreciates the efforts of legislators from both parties last fall to reform budgetary practices.

“Turning over authority to a third party (bondholders) through a bond covenant is tricky business,” he said. “There are already many checks and balances in our system.”