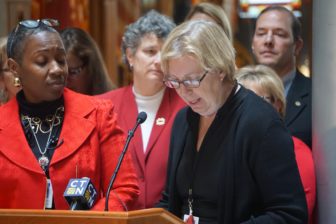 Sen. Cathy Osten talks about the “soul” of the Democratic Party. From left: Rep. Robyn Porter and Sen. Beth Bye.

Gov. Dannel P. Malloy and Democratic legislators on Thursday outlined similar agendas for the remaining nine weeks of the 2018 legislative session: Pay equity, expanded sick time and other workplace issues largely directed toward women, a constituency that polls indicate has further tilted toward Democrats since the election of President Trump.

Pay equity, paid family medical leave, a higher minimum wage and expanding the current paid sick days law were endorsed to varying degrees by the Democratic governor, who is not seeking re-election, and Democratic lawmakers trying to win clear majorities this fall after losing ground to Republicans in three of the past four election cycles.

“This is what the Democratic Party believes in,” said Sen. Cathy Osten, D-Sprague, a retired correction officer and union activist whose job outside the part-time legislature is being first selectman of Sprague, a struggling town in eastern Connecticut. “This is our soul.”

In separate events marking International Women’s Day, Malloy and the legislators promoted bills up for public hearings Thursday before the legislature’s Labor and Public Employees Committee, a bastion of pro-labor proposals that often clear the committee to die without floor votes in the House and Senate.

“At our very core, Democrats believe in equal pay for equal work, that no one working full-time should be forced to live in poverty, and that if you, your child or another member of your family gets sick, you should be able to take time off to care for them without an added financial burden,” said Senate President Pro Tem Martin M. Looney, D-New Haven.

A similarity at both events was the insistence that the political climate has shifted, giving Democrats a shot at passing progressive bills in a closely divided legislature, where the Senate is evenly split and House Democrats struggle with the smallest working majority in decades.

Polling indicates that might be true outside the State Capitol, an encouraging sign for Democrats in the fall. But the mathematics of passing legislation remain difficult, given the GOP’s opposition to increasing the cost of doing business in Connecticut.

There is an 18-18 tie in the Senate, where only the tie-breaking ability of Lt. Gov. Nancy Wyman provides Democrats with nominal control of the agenda. House Democrats struggle with the smallest working majority in decades: an 80-71 advantage, meaning the defection of five Democrats on any bill gives the GOP effective control. 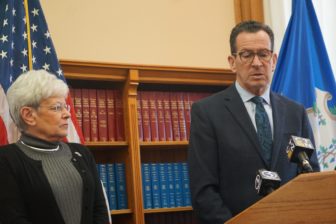 Malloy said he strongly favors raising the state’s minimum wage, but he pointedly refrained from endorsing the goal of labor groups — legislation gradually raising the minimum wage from $10.10 in steps to $15 on Jan. 1, 2021. The governor said he will take a pragmatic approach, saying a smaller increase would be better than none.

“I think we should raise the minimum wage no later than January next, and I know that there are lots of folks who want to fight about what the eventual target is,” Malloy said. “But any target is going to be a moving target. I hope that talking about what someone’s target is today doesn’t lead us to not raising someone’s minimum wage in January. That really is my message.”

In 2014, Connecticut ’s minimum wage was the second-highest in New England and fourth-highest nationally. It now lags in the region.

The state’s largest trade group, the Connecticut Business and Industry Association, submitted testimony Thursday opposing a bill that would raise the wage to $15 in 2022, then index further increases to inflation. So did small business owners.

“Connecticut has a number of strengths, but it is indisputable that it ranks as one of the costliest places to run a business,” said Eric Gjede, counsel to CBIA. “The high cost of doing business in this state has contributed to our slow recovery from the recession.”

The other workplace proposals favored by Malloy and the legislators include:

House Minority Leader Themis Klarides, R-Derby, reminded the labor committee Thursday that she and some other Republicans support the pay equity measure, hinting that a bipartisan compromise might be possible on an updated version of a bill that cleared the committee last year on a 7-6 vote, but never came to a vote in the House.

“Given my strong interest in this issue, I trust you will include me and any interested members of my caucus in the discussions going forward,” she said in prepared testimony.

Scott Jackson, the state labor commissioner, said the bills are not anti-business.

“Sometimes we forget, or purposefully ignore, that our full economy thrives when both employers and employees succeed,” Jackson said.

“The proposed bills being heard today strive to make Connecticut a state where everyone can benefit from economic opportunity, provide for their families and feel secure in their workplace,” he said.