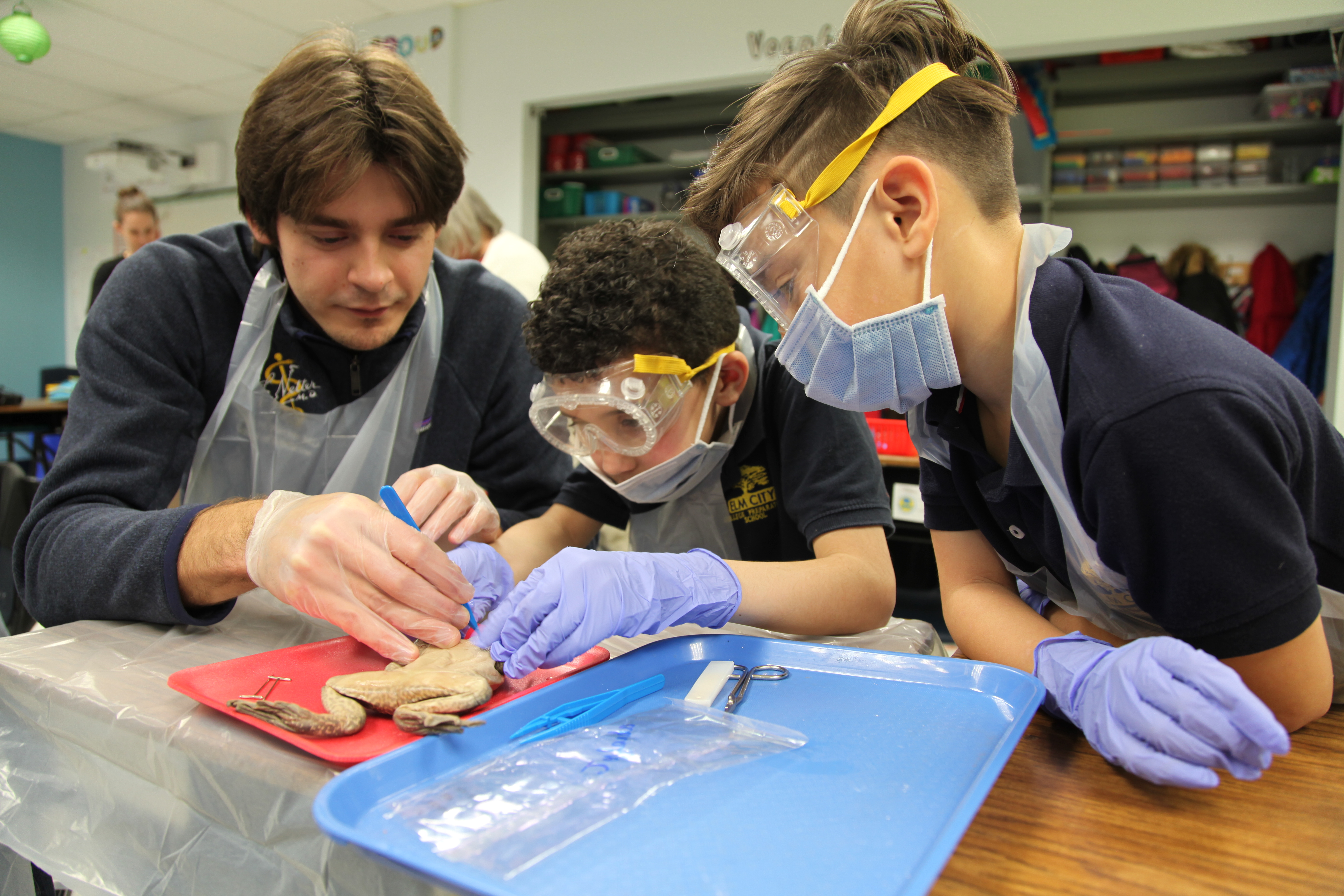 Fourth-graders Jorlando Vega, center, and Diego Reyes prepare to dissect a frog with the help of a Quinnipiac University med student as part of a “mini-med-school” expedition at Elm City College Prep in New Haven,

NEW HAVEN, Conn. — The third- and fourth-graders at Elm City College Prep, clad in protective goggles and facemasks, studied their preserved frogs with the seriousness of med students facing their first cadaver. They had practiced the dissecting procedure in an online interactive, and now they were ready to raise real scalpels and get a look at the frogs’ insides.

“You can hear a pin drop in the classroom when the kids are dissecting,” said Courtney Cayer, a science teacher at Elm City and the founder of the school’s “mini-med-school” program. “They take it so seriously. But there’s also this sparkle in their eyes that says, ‘This is really disgusting and I love it!’ ”

Cayer knows how they feel. She felt the same thrill when she was a young girl and her doctor dad showed her how to dissect a frog. Back then she could imagine no greater joy than accompanying him on his rounds. Curiosity opened up a world of options and potential careers to her. Now she wants to ensure that her students experience that sense of possibility.

“The sad reality is high school might be too late.” she said. “It’s important to inspire them when they are young.”

How do you encourage that kind of curiosity and passion in kids, and the persistence to follow where it leads?

“We believe in the idea of trying on different identities: ‘I’m going to be a photographer, robotics engineer, or actor in a Shakespeare play.’ ”
Aylon Samouha
leader of the Greenfield model’s design team

Elm City wants to find out. It’s one of three “Greenfield” schools in the Achievement First charter network, so called to conjure an image of an open field where anything imaginable can be built: a school of limitless possibilities. (The other two schools are in Brooklyn, N.Y., and Providence, R.I.)

The Greenfield model uses some rather commonplace strategies, such as integrating online learning, small-group instruction and greater parental and community involvement. Where the model pushes boundaries is in the addition of learning experiences called “expeditions.” These are not field trips. They are two-week intensive courses that take children outside the classroom and beyond the traditional subjects.

Expeditions aim to impart what Cayer learned by being around her father: a habit of pursuing expertise or passion, or both. Elm City requires that students take expeditions three times a year; they are taught by professionals and immersed in fields like journalism, orchestra, theater, dance and medicine. Students become interns of sorts, and are encouraged to pursue their curiosity — even in unexpected directions. Such pursuits are increasingly unusual in today’s standardized testing culture, especially in schools that serve low-income populations (roughly three-quarters of Elm City children qualify for free or reduced-price lunch, a standard measure of poverty).

“We believe in the idea of trying on different identities: ‘I’m going to be a photographer, robotics engineer, or actor in a Shakespeare play,’ ” said Aylon Samouha, the leader of the Greenfield model’s design team. “The activity might light the spark that creates a deeper purpose, but even if it doesn’t, it’s the experience of trying on something new, seeing how it feels and then, hopefully, opening yourself up to try the next thing. It’s a hard thing to measure, but learning science suggests that this is the case.” 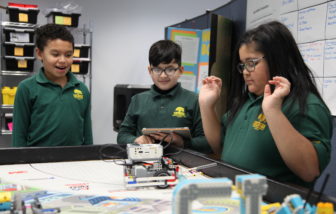 Fifth-graders, from left, Jayden Vargas, David Bojorque and Ariyana Denny figure out how to make their Lego robot move in a robotics class.

The Greenfield model was conceived in the fall of 2014, when a team of school designers led by Samouha traveled the country visiting charter schools and borrowing their best ideas. Samouha aimed to transform the picture of education from one of kids dutifully doing assigned work to one of kids “who are just on fire about their own learning path.”

Achievement First was responding to what co-founder Dacia Toll describes as a wake-up call in 2013. The charter network’s New York students had scored below expectations on the new, more challenging Common Core tests. But the more startling problem was that the charter network didn’t seem to be fully preparing its students for success beyond high school. College completion rates for their graduates were between 30 and 50 percent, well above the 14 percent national average for low-income college goers, but not up to the network’s own standards.

“It was sobering to realize we were not preparing kids nearly as well as we thought we were,” said Toll, adding that she would like to see her students’ college graduation rates top the 77 percent rate of wealthy students. “Clearly we’re not setting out to have [only] half of our students be successful.”

Toll sees expeditions as a way to give students what they need for that long-term achievement: strong academics, content that motivates them, and the chance to work independently as well as collaboratively toward a goal. The hope is that expeditionary learning will solve a problem that has long bedeviled charter schools like Achievement First: graduating kids who then find it difficult to work independently in college and who eventually drop out.

What students need, some education experts say, is a powerful incentive to keep going.

“Kids who have great persistence in their lives, it’s because they have personal passion.”
Ron Berger
chief academic officer of EL Education

“Kids who have great persistence in their lives, it’s because they have personal passion,” said Ron Berger, chief academic officer of EL Education, a group that’s working with more than 150 schools across the country to incorporate expeditionary learning into their curriculums. (Berger has consulted with the Greenfield schools on how to build expeditions.) “They learn soccer, ballet, guitar, video games, and work endlessly to get better because of personal interest and passion.”

During the Elm City expeditions, such persistence was evident. Children encountered problems and were driven to find solutions. In a Lego robotics expedition, fifth- and sixth-graders hunched over iPads trying to figure out how to make their robots move. A group of three appeared to be frustrated. When their robot finally sprang to life, they looked at each other as if they couldn’t believe it. Their robot ended up crashing into the wall, but they’d been emboldened by their minor success and got back to work.

In a photojournalism expedition, fifth- and sixth-graders got tips from professionals, then went on assignment. Sixth-grader Crystal Francis said it’s “fun” to take photos and edit them. But a recent trip to the Neighborhood Music School in New Haven posed a challenge: She couldn’t capture a jazz drummer’s quick hand movements. “We asked him to stand still and hold the sticks up as if he was playing,” she said, pointing at a black-and-white portrait of the drummer she had taken. “That gave us clear shots. Then we figured out how to change the mode to get the motion without the blur.”

In the mini-med-school expedition, students practiced suturing banana skins and putting casts on mannequin arms that Cayer bought on Amazon. As much as possible, she structures the expedition after real medical schools, assigning kids specialties, like cardiology. On “rounds,” Cayer presents them with scenarios to act out. A “doctor” might have to diagnose a patient with high blood pressure, identify the symptoms and decide which steps to take next.

After the expeditions, students have a “showcase night,” demonstrating what they’ve learned for parents. During a recent showcase, some mini-med-schoolers took parents’ blood pressure, while another team of doctors-in-training explained what to do if it becomes elevated.

Toll, who has a first-grader taking the dance expedition and a third-grader who, after completing the mini-med-school expedition, declared his plans to become a brain surgeon, said, “It’s really impressive how they are able to articulate difficult concepts, how professional they are, even referring to each other as ‘doctor.’ They made eye contact and for the most part spoke without note cards. We are all walking around saying ‘Wow, this is amazing.’ ”

An impressive display, but will kids carry these lessons into the future? That’s what Kristina Zeiser of the American Institutes for Research wonders. She agrees that expeditions can motivate kids and boost academic engagement. But her research hasn’t shown that they teach self-management and persistence.

“Kids today are so coddled,” Zeiser said. “If they are always allowed to follow their own interests, and they know they can just change their minds and try something else tomorrow, maybe they will have less perseverance, because they’re not being told that they have to persist.”

Yet EL Education’s Berger argues that following one’s interest is precisely the point. “This doesn’t mean everything kids study in school has to be about the passion they came in with. It just means we should make sure that the work kids do has purpose and meaning to it.”

The test of a meaningful education is how long it sticks, said Greenfield schools’ director of expeditions, Marc Michaelson. “We thought about how the students would view their expeditions 40 years from now, how they might look back and see that the experience opened doors for them to pursue a field of study in college or in a career, or even just develop certain hobbies in their lives.”

Achievement First’s leaders believe that they’ve designed a model of schooling focused more on preparedness for college and life than on acing a math or reading test.

“It’s a long-term perspective that I think a lot of organizations are not able to take,” Michaelson said, “because they are under so much pressure to get immediate results on tests.” 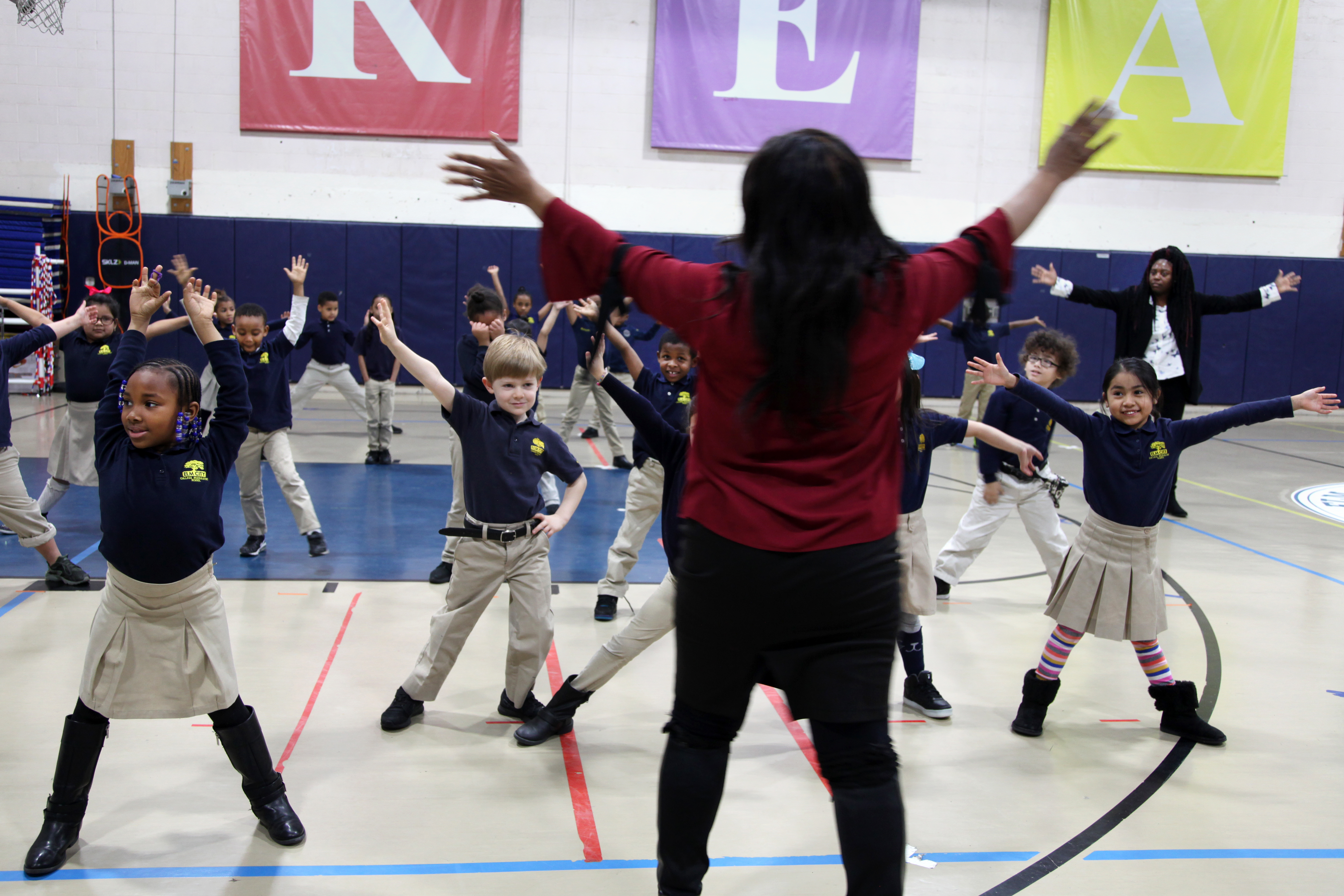 This story was produced by The Hechinger Report, a nonprofit, independent news organization focused on inequality and innovation in education.