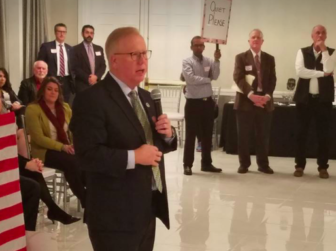 A photo of Mark Boughton at the Avon campaign event posted by the Republican Town Committee.

Danbury Mayor Mark Boughton, a prominent Republican gubernatorial candidate for governor who underwent surgery last summer to remove a benign, lemon-sized tumor from his brain, collapsed Thursday night at a crowded campaign event in Avon from what witnesses called an obvious seizure. His campaign reported he was resting comfortably at the UConn Health Center in nearby Farmington.

One of the other gubernatorial candidates, Rep. Prasad Srinivasan, R-Glastonbury, was among the physicians present who tended to the 54-year-old Boughton. Srinivasan, an allergist, said the candidates were mingling with voters in a ballroom at the North House after the speaking program when he heard shouts for a doctor.

“I ran to the back of the room, the entire distance of the ballroom to find Mark on the floor, actively having a seizure,” Srinivasan said in a telephone interview. “His face was blue, bluer than blue. His pulse was very feeble. I turned his head. The position of the head made a big difference. I started giving him cardiac resuscitation.”

Srinivasan said three physicians and a nurse at the event treated him. Boughton’s color quickly improved, then the mayor became aggressive. The medical personnel restrained him until paramedics arrived.

“He just wanted to get up,” Srinivasan said. “I tried to calm him down.”

Srinivasan said Boughton was conscious, but not alert after the seizure. He said after the agitation passed, Boughton appeared to fall into a postictal state, a condition common after a seizure that can be marked by drowsiness and confusion.

Seizures are not uncommon after brain surgery, even months later, according to neurosurgery web sites.

Srinivasan, after stopping by the hospital, said Boughton was in stable condition. One of Boughton’s campaign aides said the campaign would have no comment beyond a brief statement issued: “Danbury Mayor Mark Boughton fell ill at an event in Avon this evening. He is currently resting comfortably at UCONN Health Center in Farmington.”

Another candidate, Dave Walker, said he and the other candidates and others were stunned to see Boughton on the floor. Boughton earlier had described his surgery, as he has many times on the campaign trail.

“I didn’t see him go down,” Walker said. “I heard people calling for a doctor, then Prasad and a couple of the medical people rushed to him. One of the other medical persons performed CPR. We cleared the room in order to give him space.

“It was my understanding he was stable when he left the room,” Walker said. “Our hearts and prayers go out to him and hope that he has a full and speedy recovery.”

Boughton, who was elected last year to his ninth two-year term as mayor, is one of 11 declared candidates for the Republican gubernatorial nomination who have raised sufficient funds to be invited to the GOP’s next campaign forum. He was generally seen as one of the top contenders in a field with no consensus front-runner.

His seizure comes two months before delegates are to endorse a candidate at the Republican State Convention.

Boughton was diagnosed with an epidermoid cyst in July and underwent surgery in August at the University of Pittsburgh Medical Center. In a commercial for UPMC that ran during the Super Bowl, Boughton spoke about the chances that the surgery could have left him unable to speak.

“I think I’ve said it before, just how grateful I am to be alive,” Boughton said in the commercial. “I’ll never forget it.”