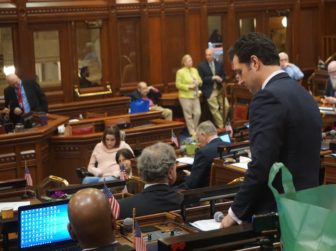 Rep. Michael D’Agostino defending the contract. Watching from well of the House were Mary Caruso and her daughter, Alex, who uses a wheelchair.

The General Assembly voted Wednesday to approve a contract that will raise wages, provide workers’ compensation and increase holiday pay for thousands of private-sector, personal-care assistants who are directly employed by their elderly and disabled clients, but paid through state and federal programs.

“Yeah, baby!” came a shout from the House gallery after the House voted 127 to 16 for final passage of the contract negotiated on behalf of the workers by the New England Health Care Employees Union, District 1199, with a PCA Workforce Council created under legislation passed in 2012 with the support of Gov. Dannel P. Malloy. The Senate vote was 32-0.

Hourly wages for most assistants would increase next month from $13.53 to $14.75, then continue to increase in increments until reaching $16.25 on July 1, 2020. They would become eligible for worker’s compensation coverage, while they still lack health care and retirement benefits under the deal.

“Today is a good day for many hardworking men and women in our state,” Malloy said. “These professionals work around the clock to provide lifesaving, critical care for thousands of elderly residents and people who have disabilities – and they do it in homes, which ultimately is better for both patients and for taxpayers.”

Many clients opposed passage of the 2012 law, saying they feared they would lose the right to choose their personal care assistants, often an intimate part of their lives. Those fears were unfounded, and several clients, some in wheelchairs, came to the House chamber to demonstrate their support for the new contract.

“That tells us we did the right thing,” said Rep. Michael D’Agostino, D-Hamden, who presented the contract to the House.

All 16 lawmakers who voted against approval were House Republicans, including some who say they objected less to the wage levels in the new contract than the state’s insertion of a union into the relationship between the elderly and disabled clients and the attendants who care for them.

“The was no need for this body to transfer our own responsibility to properly fund this program to a union to collectively bargain on behalf of PCAs,” said Rep. Rob Sampson, R-Wolcott. “They are not state employees. They have nothing in common.” 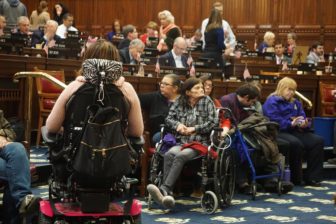 Clients of personal care assistants visited the House during the debate.

David Pickus, the president of 1199, an SEIU affiliate, said the record contradicts Sampson’s assertion that the union involvement was unnecessary.

Sampson said the measure is a boon to SEIU, producing union dues.

Pickus said the union collects dues on the contract of 2 1/4 percent of wages, up to a monthly maximum of $79, from the 8,500 workers covered by the contract.

Rep. Melissa H. Ziobron of East Haddam, the ranking House Republican on the Appropriations Committee, questioned the process by which the raises were negotiated and whether the state could afford them.

“We need to talk about our budget first,” Ziobron said. “The real emergency that is happening is that we have a deficit.”

“The work that those personal care attendants do allow residents to stay in their homes,” said D’Agostino. “The benefits far outweigh the costs.”

Mary Caruso, the mother of two young adults who employ personal care assistants to help them cope with Friedreich’s ataxia, a progressive neurological condition, watched the debate from the front of the House chamber with her daughter, Alex, who uses a wheelchair.

Caruso, a member of the PCA Workforce Council, said she supported the raises, which she says will help produce a stable workforce for the disabled.

Debra Hoyt, the president of the CT Association for Healthcare at Home, warned that the non-profit agencies her group represents have not seen Medicaid reimbursement rates go up for 10 years, meaning they cannot afford to match the raises now going to the unionized attendants covered by the new contract.

“While we all value these workers and agree they need to make a living wage, the unionized PCA wage increases will create a significant wage gap between home health agency workers and unionized PCAs,” Hoyt said in a letter to lawmakers. “This wage pressure, combined with the home health aide worker shortage and high turnover rate will result in home health agencies being unable to fill jobs to serve Medicaid clients in need of home care.”Jacqueline Rabe Thomas contributed to this story.