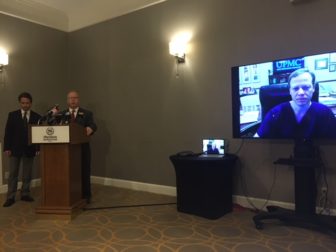 With a graphic and detailed presentation from his physicians, Danbury Mayor Mark Boughton moved forcefully Wednesday to reassure voters of his fitness to continue campaigning for governor, addressing his seizure at a campaign event two weeks ago and his surgery last summer to remove a benign tumor.

His neurosurgeon, Robert Friedlander, and primary care physician, Spyros Smith, walked reporters through Boughton’s surgery for an extremely rare and slow-growing lesion in his brain, his post-operative care and the results of examinations after the seizure. Both said Boughton was physically fit to campaign and serve as governor.

Boughton said he waived his privacy rights in the interest of full transparency — and in recognition that his collapse in Avon at a campaign event attended by 200 needed to be addressed.

“We want to make sure we elect someone that is energetic, that is passionate and is ready to go on day one,” said Boughton, a nine-term Republican mayor.

Friedlander said Boughton showed no signs of brain damage in examinations after the seizure, which he attributed to dehydration after a long day of campaigning and the mayor’s apparent failure to take one of the two doses of an anti-seizure drug he is supposed to take mornings and evenings.

“The major, major issue is the lack of taking the medicines,” Friedlander said. “That’s where we are. With him taking the seizure medicine, the likelihood of having a seizure, I can’t tell you it’s zero, but it’s extremely, extremely low.”

The doctors answered questions for 46 minutes, Smith in person and Friedlander via a video-conference call from the University of Pittsburgh Medical Center. Friedlander displayed CT scans, an MRI and surgical photos. 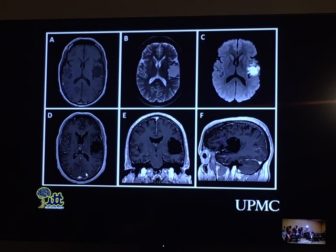 Smith pointed to a photo of a clear celebral artery as evidence of the absence of vascular disease. Friedlander called the arteries “pristine.”

Boughton and both doctors emphasized that the seizure was not a cardiac event. Friedlander said if anyone attempted CPR, as some witnesses described, it was unnecessary, though perhaps understandable in the confusion of the moment.

Rep. Prasad Srinivasan, R-Glastonbury, an allergist and fellow gubernatorial candidate, was one of three doctors who came to Boughton’s aid after the collapse. He described Boughton as him as turning blue. Friedlander did not question that description, nor did Boughton.

“I do want to be very, very clear I am incredibly thankful for the work and assistance and help that was provided to me that evening,” Boughton said. “Having a seizure is indeed a scary and unsettling experience.”

Friendlander said the benign tumor was the result of excessive skin that developed in Boughton’s brain, most probably beginning when he was an embryo. The lesion, which is non-cancerous, took nearly a half-century to grow large enough to pose a problem to the 54-year-old mayor.

Should it recur, Friedlander said, it would be slow-growing. The presence of the tumor and the surgery to remove it do not make Boughton susceptible to other forms of tumors.

“Everything I saw is out,” he said.

Boughton said if either of his doctors had advise him against running for medical reasons, he would not continue.