As the Connecticut legislative season advances, there has been less talk and more voting at the State Capitol. (Well, more voting anyway — and some thinning of the political herd.)

For example, the state House of Representatives overwhelmingly approved a pay-equity bill that would prohibit employers from asking job applicants about their pay history – a move intended to give women a better shot at earning the same as men in the same job.

That same body approved 81-65 a resolution calling for a 2020 referendum to allow early voting in Connecticut. 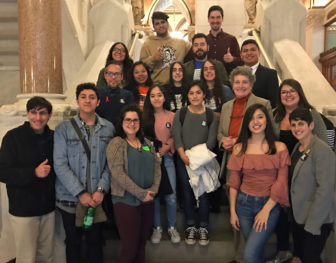 Courtesy of Connecticut Students for a Dream

The State Senate, meanwhile, on a vote of 30-5, approved a bill that will make some undocumented immigrants eligible for college financial aid.

In votes of another kind, more than 300 janitorial employees at Foxwoods Resorts Casino voted to join the same union that represents dealers, bartenders and some other workers there. The balloting followed by days the U.S. Senate’s rejection of a package of bills that would have enacted the Tribal Labor Sovereignty Act giving the tribal nations an exemption from federal labor standards.

(Speaking of Foxwoods and the Mashantucket Pequot tribal nation, its plan to develop a casino in East Windsor jointly with the Mohegan tribe isn’t looking good following State Attorney General George Jepsen’s warning to state legislators that proceeding without the approval of the U.S. Department of Interior is fraught with risk.)

There is much more voting to do, of course (and way more talking) at the State Capitol – much of it about the most intractable and politically uncomfortable issue: state finances.

Earlier in the week state House Speaker Joe Aresimowicz, a Democrat, said he would support using some of higher-than-expected income tax receipts to preserve “crucial programs” such as transportation, Medicaid and aid to cities and towns. (Tempting, perhaps, but to do it lawmakers would have to abandon a budgetary rule enacted only six months ago.)

Nevertheless, on Friday, the Democratic leaders of the legislature’s Appropriations Committee proposed a $20.87 billion plan to restore money for education, social services and municipal aid. Republicans, too, announced a $20.44 billion budget plan that would also dip into the unexpected uptick in state income tax revenue — despite additional debt imposed by a wrinkle in the hospital tax. Both plans were condemned as unconscionable by Gov. Dannel Malloy  who, in a harsh rebuke, said the legislators were behaving “like teenagers.”

Earlier in the week Aresimowicz and Majority Leader Matt Ritter were boosting the idea of imposing a $10 surcharge on insurance policies to help fund the rescue of owners of homes whose foundations are crumbling because they were poured with concrete contaminated with pyrrhotite.

Where legislation goes, there also goes politics — only now the number of prospective candidates for governor is falling off. State Sen. Toni Boucher, R-Wilton, ended her exploratory campaign for the chief executive job and will instead seek re-election; and after submitting a $567 million budget to Hartford’s new financial oversight panel (appointed when the state saved the city from almost certain bankruptcy), Mayor Luke Bronin also withdrew from the Democratic party’s governor’s race. 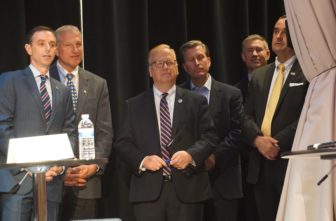 Republican gubernatorial candidates waiting in the wings to be introduced at the fifth and final forum.

The Republican line-up of gubernatorial hopefuls is still 11 strong, however, and ended its series of campaign forums Wednesday.

Like Baucher, State Rep. Michael D’Agostino, D-Hamden, ended his exploratory campaign for attorney general and will seek re-election to a fourth term.

Currently (and ironically), the public official with the most campaign money is U.S. Rep. Elizabeth Esty, D-5th District, who announced earlier this month she will not seek re-election. Federal Election Commission rules determine how much of it will be returned to donors or contributed to other campaigns.

Esty’s mishandling of a sexual assault case involving her then-chief of staff was her undoing — and also inspiration for some limited self-examination by state legislators.

In Washington, D.C., heads were bowed in response to the death of former First Lady Barbara Bush.

On the anniversary of the mass shooting at Columbine High School, Connecticut’s Sens. Chris Murphy and Richard Blumenthal both continued their support for gun-control legislation being proposed by students behind the National School Walkout.

Murphy also introduced legislation that would allow individuals and businesses to purchase Medicare coverage, and said he would oppose the nomination of Mike Pompeo as secretary of state, citing the candidate’s “narrow” foreign policy views and stands on a number of issues, including the use of torture and the rights of Muslims and LGBT Americans, “that place him outside mainstream American values.”

At the House of Represenatives, U.S. Rep. Rosa DeLauro, D-3rd District, spoke harshly against the Republican move to end food stamp benefits for many childless adults (including those in 114 Connecticut towns) unless those beneficiaries get a job or work training.