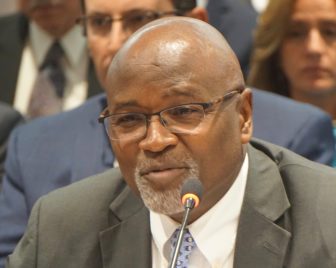 Richard A. Robinson testifying at his confirmation hearing.

Not so long ago, the man now poised to become the first black chief justice of the Connecticut Supreme Court was grabbed by a white clerk in a Litchfield County hardware store on a suspicion he was a shoplifter. It was a misunderstanding, one that left Richard A. Robinson livid and humiliated.

Robinson, 60, a judge for 18 years at all levels of the state court system, told the story Monday during his confirmation hearing before the legislature’s Judiciary Committee, but only after being prodded by a white legislator who knew of the incident, Rep. Arthur O’Neill, a Republican of Southbury.

“I don’t think you can imagine how that makes you feel, when you are constantly made aware of how people see you because of the color of your skin,” said Robinson, a martial-arts practitioner on a family trip to a three-day karate tournament when the clerk grabbed him. “I probably wanted to hit him.”

“For me, it’s an emotionally compelling story,” O’Neill said.

Over three hours Monday, the role of race in America and in the courts of Connecticut was central to legislators’ questioning of Robinson, who served a part-time role as general counsel for the Connecticut Conference of the NAACP for a dozen years before Gov. John G. Rowland nominated him to the Superior Court in 2000.

Robinson left his hearing assured of two things: Unlike Gov. Dannel P. Malloy’s first choice for chief justice, Robinson is assured of confirmation, but he will assume office burdened by high expectations, particularly by the members of the legislature’s Black and Puerto Rican Caucus. They told Robinson they expect him to work toward  restoring the faith of minorities in a  judicial system they see as rife with racial disparities, both for its employees and those who come there seeking justice.

“My fervent hope, my fervent prayer is that you have the intestinal fortitude and the courage to speak to those issues and represent those people in a way that only you can,” said Rep. Robyn Porter, D-New Haven. “To whom much is given, much is required.”

The Judiciary Committee voted unanimously late Monday night to recommend Robinson’s confirmation to the full General Assembly, as well as those of Steven D. Ecker as an associate justice of the Supreme Court and Ingrid L. Moll as a judge of the Appellate Court. The panel also endorsed the confirmations of 29 of the 30 new judges Malloy nominated to the Superior Court, but Republicans warned they may vote against them over budgetary concerns when they come before the House and Senate. Action was delayed on a 30th nominee, Francis O’Reilly of Fairfield.

Republican lawmakers asked Robinson no questions about his legal rulings as a judge of the Superior and Appellate courts and as an associate justice of the Supreme Court, a striking departure from the treatment of his colleague, Associate Justice Andrew J. McDonald. GOP lawmakers, some of whom accused McDonald of judicial activism, quizzed McDonald for a dozen hours on the rationale behind several decisions, especially pertaining to the repeal of the death penalty.

With Republicans voting as a bloc, the Senate rejected the nomination of McDonald, a former adviser to Malloy who would have been the first openly gay chief justice of the Supreme Court in any state.

Robinson told lawmakers Monday that one of his most important decisions on the Supreme Court was his refusal to overturn the 4-3 decision that brought McDonald such grief: An appeal by a convicted killer, Eduardo Santiago, of his death sentence after the General Assembly had repealed capital punishment for future crimes, but leaving intact the sentences of 11 men already on death row.

The retirement of one of the four justices in the Santiago majority, Flemming L. Norcott Jr., and an appeal by the state to preserve the death sentence in a case involving another convicted killer, Russell Peeler, led to an unusual reconsideration of the original death-penalty decision. Robinson, who took Norcott’s place on the panel, concurred with the majority in declining to set aside the Santiago decision.

His decision was based on the principle of stare decisis — a Latin term referring to the idea that a court should not lightly discard appellate precedents. Chief Justice Chase T. Rogers, who voted with the minority in Santiago, joined the majority in Peeler, also because of stare decisis.

Justice Peter Zarella, who has since retired, attacked Rogers and Robinson in a stinging dissent.

“I cannot fathom how Chief Justice Rogers and Justice Robinson believe they respect the rule of law by supporting a decision that is completely devoid of any legal basis or believe it is more important to spare this court of the purported embarrassment than to correct demonstrable constitutional error,” Zarella wrote. “Of course, it is possible that Justice Robinson believes that Santiago is correct, although he has not told us so.”

Republicans asked Robinson nothing about the death-penalty case. 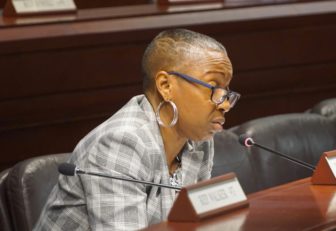 Porter and Sen. Ed Gomes, D-Bridgeport, the co-chairs of the Labor and Public Employees Committee, told Robinson they have met with Judicial Branch employees who complain of racial discrimination in their workplace. Neither provided details during the hearing, but both told Robinson they expected him to resolve them.

Robinson, who sits on a committee that oversees training to promote “cultural competency” and racial sensitivity in the courts, defended the branch as staffed with people eager “to do the right thing,” but he promised as the leader of the court system to be responsive to concerns about how its employees are treated.

“All I can assure is the buck will stop with me. And you can hold me to it,” Robinson said.

“I will,” Porter replied.

Porter and Gomes, who are black, were less deferential to Robinson than some of their white colleagues. More than once, they reminded Robinson of shared experiences as black Americans, particularly as it applies to justice.

“My experience is my evidence,” Porter said. “You want data? I live it. You live it. We were born in the same skin.”

“You know what black folks say” about justice, Gomes said. Justice in the black community, especially the weight of criminal penalties, sometimes is seen as falling on “just us,” Gomes said.

“I see you don’t believe in quotas,” Gomes said, referring to one of Robinson’s answers to a legislative questionnaire. “I don’t want to be anybody’s damn statistic, either.”

In the questionnaire, Robinson wrote, “I do not believe in quotas, but I do believe that we have an obligation to ourselves and this country to take affirmative steps to make sure that we are not doing anything to deprive a group of people of their rights, opportunities, liberty or property in a discriminatory manner.”

It was while he was an Appellate Court judge that Robinson was accused of shoplifting.

On his way to a three-day tournament he and his family attend every August at a camp, Robinson said, he realized he had forgotten the Tiki torches he usually brought. He picked up four at a hardware store and paid for them, when he noticed one was broken. The checkout clerk told him to leave the broken one and grab another as he exited.

“And I’m grabbed on my way out doing exactly what I was told,” Robinson said.