A close vote in Connecticut for the national popular vote 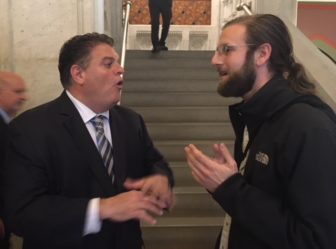 The House of Representatives voted 77 to 73 on Thursday to approve and send to the Senate a bill directing Connecticut to join an interstate compact committing its seven electoral votes to the presidential candidate who wins the national popular vote.

The compact would not take effect until states representing 270 electoral votes — the magic number to elect a U.S. president — sign onto a compact that would undo a 200-year-old element of the Constitution without amending it.

Connecticut would bring the tally to 11 states and 172 electoral votes.

Underlying the compact is a simple concept: The candidate with the most votes should win, a standard that applies to every elective office in America save one, the presidency. But the debate over the practical consequences and philosophical underpinnings of what essentially is a constitutional workaround are anything but simple.

Currently, the presidency is won or lost in a series of winner-take-all elections , encouraging presidential campaigns to focus only on a dozen battleground states. About two-thirds of all campaign events in 2016 were held in just six states: Florida, North Carolina, Pennsylvania, Ohio, Virginia, and Michigan.

The vote and debate Thursday was one-sided: Rep. Daniel Fox, D-Stamford, the chief sponsor as co-chair of the Government Administration and Elections Committee, stood defending the bill from an onslaught of questions and criticisms from Republicans, many of whom see the compact as sour grapes over the 2016 election.

Two of the last three presidents are Republicans who lost the popular vote: George W. Bush in 2000 and Donald J. Trump in 2016. But a swing of 60,000 votes in Ohio in 2004 would have given the Democrat John Kerry the presidency, while losing the popular vote.

Every Republican except Livvy Floren of Greenwich opposed the compact. Every Democrat except Pat Boyd of Pomfret, Daniel Rovero of Killingly and Christopher Ziogas of Bristol supported it.

Rep. Arthur O’Neill, R-Southbury, said he did not see how an agreement by the states to assign their electoral votes to the winner of the popular vote was constitutional.

“I keep hearing the word ‘assigned.’ Is there any provision in the U.S Constitution that refers to the assignment of electoral votes?” O’Neill said. “I don’t quite see how that fits under the Constitution.”

Others struggled with the concept of the state’s electoral votes being cast for a candidate who did not carry Connecticut, even if the result would be to elect the winner of the national popular vote.

Fox replied there currently is only an “illusion” of every vote counting, due to the winner-take-all nature of apportioning electoral votes.  Trump got 41 percent of the vote in Connecticut, but no electoral votes.

Steven Winter, a New Haven alderman who has been lobbying for passage, said politicians see the compact as more complicated than voters do.

“I think when you talk to voters about this, they’re more concerned about what this will do for Connecticut. What role will Connecticut have in national elections vis a vis small states, large states, big cities, those kinds of things,” Winter said.

Winter was engaged by Rep. Dave Rutigliano, R-Trumbull, in an impromptu debate outside the House after the vote.

“You’re for the popular vote?” Rutigliano asked. “That’s why you’re here? Why? Why all of a sudden? I think it’s the worst idea ever.”

“I want to make every vote in every state matter,” Winter said.

“They already do count. And we’re a Republic, not a democracy — mob rule. This is a bad idea. You guys think it’s great. You’re letting Trump warp your brain. Why would we cede our power to three or four big states?”

“We can’t be more irrelevant than we are now,” Winter said.

Rutigliano and Winter continued to joust. They parted amicably, agreeing to disagree.

Perhaps one will change his mind. One of the electoral college’s prominent critics used to be Donald Trump. In 2012, when there was some thought that Barack Obama could be re-elected without winning the popular vote, Trump thought the system was a disaster.