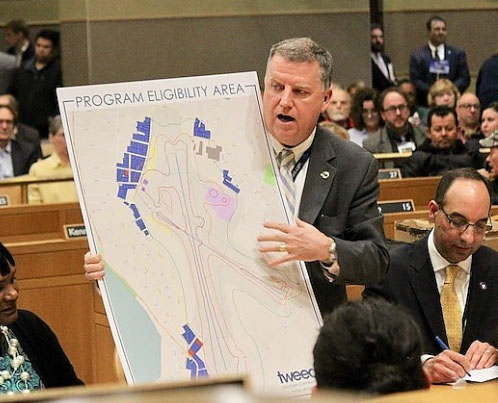 One argument: Start-ups and out-of-town developers who see a potential for profit shouldn’t dictate the fate of a neighborhood.

A counter-argument: Neighbors who knowingly move near an airport shouldn’t be allowed to hold the city and the state economically hostage.

Those were two of the prevailing sentiments aired over more than three hours at New Haven City Hall last Wednesday night during a public hearing of the Board of Alders Community Development Committee.

The committee was taking testimony on a resolution to support a state proposal to revisit a compromise on the length of the runway at Tweed New Haven airport so it can be expanded by 1,000 feet by paving existing safety areas, welcome more commercial jets — and, in the view of city officials and business leaders, boost the local economy.

As usual with the subject of Tweed in New Haven, that sparked an outcry from homeowners in Morris Cove, who blasted city officials for not dealing honestly with them and complained of the airport’s impact on their neighborhood.

State House Bill 5350 would eliminate a provision in state law that restricts Tweed’s runway to 5,600 linear feet and open the door for a pilot program for shared solar power under consideration by the state General Assembly during the session that ends May 9. In addition to making way for the Tweed runway expansion, the bill also would close the second smaller “14-32” runway. Mayor Toni Harp’s administration is looking for a nonbinding aldermanic vote of support for the state bill to help get it over the goal line.

If alders want to weigh in with their support they needed to take action —or rather no action, which they voted to do last Wednesday— so that the full board can vote the resolution up or down during the board’s next full meeting on May 7. So now it’s up to the full board to decide which side it agrees with.

The Tweed expansion quest has prompted passionate views on both sides in New Haven. Harp and business officials call a 6,600-foot runway crucial for luring smaller jets that will lead to commercial service to Florida; Washington, D.C.; and maybe Chicago. Neighbors call the proposal a broken promise to keep service limited and an infringement on their peace of mind. 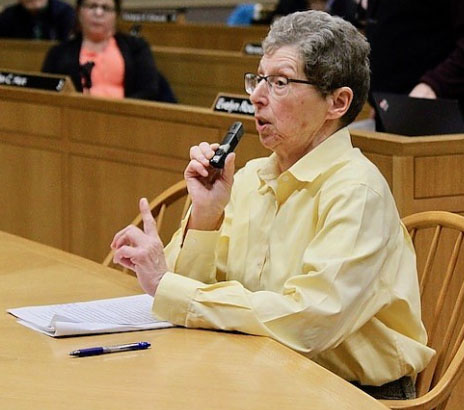 More than 100 people packed the aldermanic chamber for the hearing, and more than 30 of those people stuck around to rehash both sides of those arguments. The prominent business — and labor — leaders lining up to speak included the new CEO of the Greater New Haven Chamber of Commerce, Garrett Sheehan, UNITE Here Local 35 and Central Labor Council President Bob Proto, and Digital Surgeons founder and DISTRICT developer David Salinas.

Harp’s economic development administration team testified for the first hour. They noted that since she’s been in office the mayor has championed expanding the airport’s commercial operations. City and airport officials argued that expansion of the runway would allow the airport to attract more carriers, which could mean more flights and easier accessibility for those trying to get in and out of the region.

State Sen. Tim Larson, executive director for the airport, told alders that right now much of the airport traffic that could be captured by Tweed is going to New York. More flights and accessibility could mean greater economic opportunity for not only New Haven, but all of southern Connecticut, proponents argued.

Harp’s team also shared some preliminary details of a “community benefit” package that they believe could mitigate some of the concerns neighbors have about the impact an expanded runway might have on traffic, the environment and the future economic viability of the city.

City Engineer Giovanni Zinn laid out several ways to slow traffic, including reconfiguring the intersection of Dodge Avenue and Burr Street by installing a roundabout to slow traffic down.

“It’s a quiet way to slow down traffic,” he said.

Michael Piscitelli, the deputy economic development administrator, said that right now the airport supports about 500 jobs and has a $55 million impact. Another 300 jobs could be added if the runway is expanded, and that could have an estimated $32 million impact. 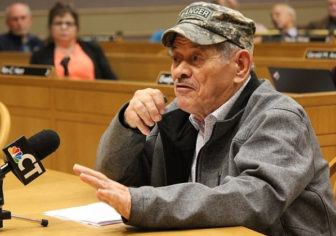 Opponents said they’ve heard the old “If you expand it, they will come” tune before. They said they heard that when the city struck an agreement with East Haven to restrict the runway to its current length and then had it cemented—or so they thought—into law almost a decade ago.

Citizen watchdog Gary Doyens, who lives across town in Westville, testified on the Morris Cove neighbors’ side. He called the new proposal a “bum rush.” He admonished alders not to take a vote until neighbors are willing to sign off on it. He also suggested they stand with neighbors against the bills moving through Hartford. He said he’s been hearing the same expansion talk for Tweed for at least 20 years and the goalpost for a successful airport has been moving for just as long.

“This is not something that should be shoved down peoples’ throats,” he said.

Sean O’Brien, who lives on Alfred Street just behind the airport, pointed out to alders that the public hearing was the first time that he and his neighbors had heard about the community benefits package that city officials “dropped in our laps” Wednesday. He also chastised city and airport officials for having no buy-in from East Haven, where part of the airport sits.

Rachel Hareema, who lives on Lighthouse Road, said that though people have argued that many homeowners in the neighborhood knew they would be living next to an airport, she bought her house in 2012 with the understanding that there wouldn’t be further expansion of the runway. That same year she, and everybody else would learn how real climate change was when she and other neighbors had to evacuate for Superstorm Sandy.

She expressed concern that creating more impervious surface around Tweed, which acts as a water retention area for the neighborhood, would leave the neighborhood further unprotected from these stronger storms and higher tidal surges and flooding, that no one could have predicted in 1931 when the airport first opened.

While there was a strong show of opposition, the majority of those who testified Wednesday night supported expanding Tweed’s runway. And for them, the benefit to existing businesses that want to grow and to attract potential benefits outweigh any perceived negatives.

Barry Nalebuff, a professor in the Yale School of Management, tried to bring some scale back to the conversation by pointing out that the runway expansion wouldn’t make Tweed the airport that it was 20 years ago, when there might have been as many as 60 flights a day.

He said the airport might see about a 10 percent increase in the number of flights with an expanded runway. That could be helpful to entrepreneurs like him who live here but go wherever their work takes them, he said. It also would make the city more attractive to dual-career couples.

Nina Fawcett doesn’t live in Morris Cove but she does know what it’s like to live in a neighborhood with a nuisance. She lives in Newhallville where residents have waited for years to be rid of the police department’s firing range (which is happening).

She said the city and regional need for more jobs has to outweigh concerns about inconveniences like traffic. Fawcett said she’d choose an airport in Newhallville over the firing range any day.

“The jobs can’t come if they can’t get here,” she said. “I recognize that it’s upsetting…but sometimes you have to do something for the greater good.”