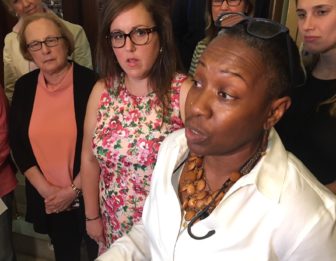 By a vote of 35 to 1, the Senate gave final passage Friday night to a pay-equity bill that places Connecticut in the growing ranks of states that bar employers from asking applicants about their pay history, capping a 24-hour whirlwind of bipartisan support for legislation demanded by women at the General Assembly.

Earlier Friday, the Senate voted 31-5 to approve and send to the House a bill that overhauls Connecticut’s sexual harassment and assault laws and gives lawmakers an election-year claim of solidarity with the Time’s Up and Me Too movements.

On Thursday, the House of Representatives unanimously gave final approval to a bill giving an array of protections to incarcerated women, particularly those who are pregnant. The House also gave final approval, voting 147 to 1, for a bill to reduce instances when victims of domestic violence are arrested alongside their attackers. The Senate unanimously approved both measures on Tuesday.

Secretary of the State Denise Merrill and Democratic women from the House and Senate staged a celebratory press conference that briefly turned awkward when House Minority Leader Themis Klarides, R-Derby, arrived with women from her caucus, suggesting there was no partisan advantage in the votes.

“I thought we all stood together as women,” Klarides said. “We all stand here in support of all women’s issues.”

Gov. Dannel P. Malloy promised Friday night to sign the pay equity measure as soon as it reaches his desk, calling its overwhelming passage “a major victory for Connecticut families.”

“It is unacceptable that in 2018, Hispanic women earn just 54 cents and black women earn just 63 cents for every dollar a white man earns,” Malloy said. “This inequity is perpetuated by the practice of asking for salary history during the hiring process, which can disproportionately ensure that women who were underpaid at their first job continue to be underpaid throughout their careers, creating a cycle of poverty and causing real harm to families.”

Sen. Marilyn Moore, D-Bridgeport, said the bill will be especially important to black and Latina women in her district.

“Each earn almost half of what white men earn. In fact, for black women, Equal Pay Day is not until July 31,” she said.