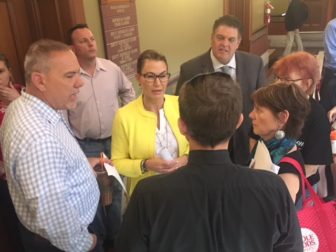 Social services advocates brought their clients to the State Capitol on Saturday to make the case for lawmakers, now considering final revisions to the second year of the state’s biennial budget, to reverse cuts that could leave 13,200 poor adults without coverage in January.

At a press conference and then during an impromptu meeting in the hallway with House leaders, they pressed for restoration of funding for all Medicaid programs, but took particular care to highlight cuts to Husky A — a program they said hasn’t received sufficient attention from lawmakers and the media relative to other services.

To save $11.3 million next fiscal year, legislators decided last October to lower the income threshold for Husky A from 155 percent of the federal poverty level to 138 percent.

That change targeted about 13,500 recipients. But because the program is supported with federal Medicaid funds, a federal requirement mandates a transition period before people can be removed from the rolls. Most of the target group, about 13,200 recipients, will lose coverage on Jan. 1.

That means there is time to reverse the decision. But despite surging spring income tax receipts and projections that Connecticut will close the fiscal year with more than $1.1 billion in its reserves, the last spending proposals from both Democratic and Republican legislative caucuses did not recommend reversing the cut.

“We know that if parents don’t get care, their children don’t get care,” said Stephen Karp, executive director of the Connecticut chapter of the National Association of Social Workers, who then cited the projected reserve. “I say, ‘Really? We can’t do this?’ ”

“This is absolutely unconscionable,” said Rev. Teran E. Loeppke, a United Methodist clergy from Hamden. “It turns my stomach, in fact. I am not alone.”

About two dozen advocates rallied in the Capitol’s Hall of Flags before delivering to legislators a petition signed by more than 100 Connecticut religious leaders asking for full restoration of the Husky A funding.

Sheldon V. Toubman, an attorney with the New Haven Legal Assistance Association, said when lawmakers tightened Husky eligibility two years ago, about 80 percent of those who lost coverage could not afford to buy their own insurance on the state exchange.

What happens, he asked, when a group earning even less money per year loses Husky coverage? 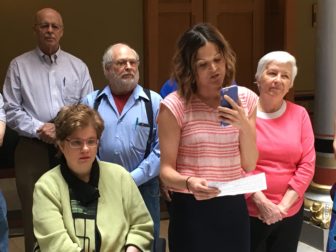 Windsor resident Sally Grossman, with phone, tells how state Husky benefits helped her deal with complications during her pregnancy in 2012.

Windsor resident Sally Grossman, who runs a small painting business, said her Husky coverage was vital when she faced complications with her first pregnancy in 2012. After pre-term labor at just 28 weeks, Grossman was hospitalized and stabilized. She later gave birth to her son, who is now five.

“Like most working parents, I can’t afford to get sick,” she said, adding that she still is receiving Husky coverage but it has enabled her to get her business off the ground.

Ann Pratt, director of organizing for the Connecticut Citizen Action Group, said advocates are no less concerned about any Medicaid-supported program, including the Medicare Savings Program.

That program, which helps poor elderly and disabled patients pay for medications, is slated to face tighter eligibility requirements on Jan. 1.

More than 110,000 patients are expected to lose some or all assistance. Republican lawmakers have proposed restoring more than $90 million to reverse the entire cut. Democrats have proposed a partial restoration.

Husky and the Medicare program “are equally important to fund,” Pratt said. “They both save lives.”

Rep. Cathy Abercrombie, D-Meriden, a member of the legislature’s Appropriations Committee who has advocated for both programs, said, “There are a lot of needs in the human services community.”

Besides these programs, she said, the legislature also has whittled down resources for home care for the elderly, nursing homes, and for community-based social services.

Despite the recent revenue surge, the state largely has struggled with deficits and sluggish revenue growth since the last recession ended nearly a decade ago. The dominant philosophy at the Capitol “from a human services point of view, has been to hold the line.”

Abercrombie added she will propose a comprehensive assessment of the entire social services safety net in the 2019 General Assembly session.