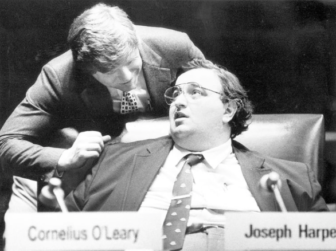 John Larson and Joe Harper during their state Senate days.

Joseph H. Harper Jr., a Falstaffian, old-school politician who zealously protected his New Britain district as a Democratic state lawmaker while playing a pivotal role in the 1991 budget fight that led to passage of the income tax in Connecticut, died Sunday. He was 70.

Harper was known for his girth and political acumen in a 16-year career in Hartford as a state representative and state senator. Friends periodically tried to arrange treatment for Harper, who weighed 736 pounds when he left the state Senate after not seeking re-election in 1994.

But he succeeded after leaving elective office, dropping more than 450 pounds with the help of a hometown institution that employed him, the Hospital for Special Care.

It was a battle he publicly discussed and the hook for a fundraiser he headlined for autism charity connected to the hospital. He lost the weight without bariatric surgery, relying on diet and exercise. He said he struggled with gains and losses over 20 years, but stabilized his weight after retiring in 2010 as the hospital’s vice president of government relations.

“This is my way of giving back,” Harper said before the fundraiser in 2014.  “HSC helped me conquer my obesity without surgery, now I want to assist HSC in helping individuals and families living with Autism Spectrum Disorder conquer their challenges.”

Harper thrived in New Britain, an industrial city in the midst of rapid demographic change during his time in office, as ethnic whites began moving to suburbs and black and Latino residents moved in, taking advantage of relatively cheap housing.

He was a politician who paid attention to ward politics, but also public policy. Harper had a master’s degree in public administration.

As co-chair of the Appropriations Committee, he knew the budget like few others and was not averse to making sure it included spending for New Britain, whether it be a bridge or money for a state office in the city’s downtown or Central Connecticut State University.

At the Capitol, everyone came to Harper, a concession to his difficulty in walking.

Harper’s role in passage of the income tax was the sole issue an opponent used against him in a fight over the Democratic nomination in 1992. “He now sees what he thinks is an Achilles’ heel, and he’s going after it,” Harper said. “I would venture to say if it were not for the income tax vote, I don’t think he’d have the courage to go after me.”

His sharp political eye was accompanied by a theatrical sense of humor. He and his close friend from the state Senate, U.S. Rep. John B. Larson, could engage in comedic byplay worthy of an old Vaudeville team.

“Joe was an extraordinary legislator, a close friend, a great ally, and most of all the laughter and camaraderie we shared in the Senate was in part the glue that held the Democratic caucus together,” Larson said. “A complicated and interesting man, who struggled physically with size, yet was able to transcend his physical predicament with his intellect, great sense of humor, his acute sensitivity of humanity, and his understanding and compassion for people. He will be greatly missed.”

Their relationship survived Larson, then the Sentate president pro tem, splitting with his caucus over the income tax. Larson’s refusal to  vote for the income tax made a Republican, Sen. William Nickerson of Greenwich, the influential last-word on how it would be constructed. It rankled Harper.

At the time, Larson was looking ahead to running for governor in 1994. With Nickerson at the table, the final version of the state’s first broad-based tax on income was flat, one that lowered an existing tax on investment income that was a great boon to Greenwich taxpayers, but less so in New Britain.

Correction: Based on information provided to CT Mirror, his age was incorrectly reported as 69 in the original posting of this story. He turned 70 in March.