Eligible for financial aid, nearly a million students never get it 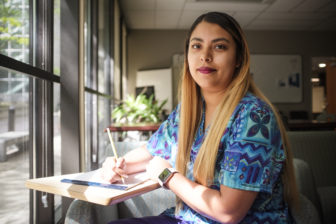 Lack of sufficient financial aid has forced Jocelyn Ramirez to work more than 40 hours a week and cut down on coursework so she can afford to stay in college. Photo courtesy Jocelyn Ramirez.

Last year alone, more than 900,000 low-income students who applied for and were found eligible for state financial aid for college never received it, because states ran out of money, according to a new analysis of state data by The Hechinger Report.

And it’s not just a few states that have a severe shortage. In ten states, more than half of eligible students didn’t receive a grant, including Oregon, Kansas, Delaware and Illinois.

“In most states, the aid program comes from the general fund, and once it’s gone, it’s gone,” said Sarah Pingel, senior policy analyst at the Education Commission of the States. “[Legislators] are aware of the consequences, that thousands of students may not get the funding they need to afford college.”

In Maryland more than 18,000 eligible low-income students were denied funds from the state’s need-based tuition aid program last year. In Kentucky it was more than 28,000 students, and in Florida more than 100,000, even though they applied on time and qualified for the aid.

The crisis has been stoked by years of budget cuts combined with an increased number of applicants, due to a growing awareness that good jobs require more than a high school diploma.

“When these programs were designed, it was an acknowledgment that there were low-income students who had need, and of the importance of going to college,” said Carrie Warick, director of policy and advocacy at the nonpartisan National College Access Network. “But then comes the requirement to balance budgets, and a state has to decide either to bring in more revenue or to cut. One of the easiest places to cut the budget is in financial aid.

“People may think this is just happening in their state,” Warick added. “But when you look around, you can see this is a national problem.”

People may think this is just happening in their state. But when you look around, you can see this is a national problem.
Carrie Warick
National College Access Network

Some states, such as Maine and Alabama, decide which students get funding based on whose financial need is largest. Others do it on a first-come, first-served basis, which disadvantages first-generation students, adult students and students with inadequate college counseling, since they are less likely to be aware of early filing deadlines. Other states disburse the money to the colleges, which in turn decide which students receive the funds.

Most economists agree that, in order to keep growing, the U.S. economy will need more workers with some kind of postsecondary degree. It is difficult to track how many students drop out of college or simply don’t show up due to insufficient financial aid, but researchers believe that lack of aid discourages students from enrolling and creates obstacles to graduation. 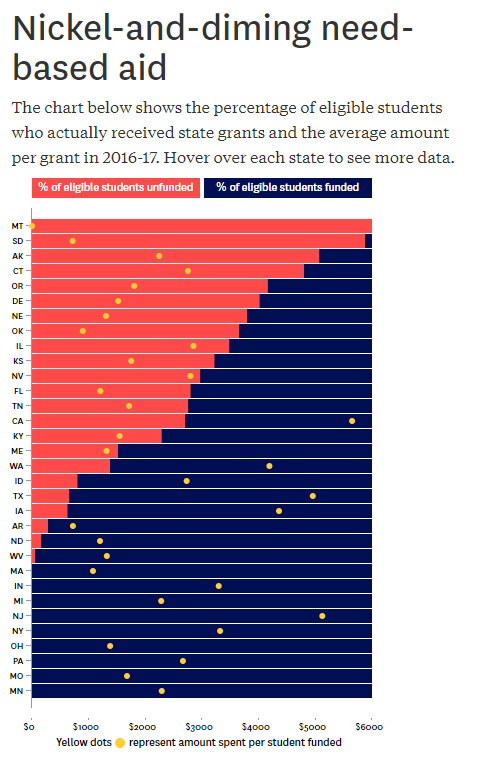 Connecticut’s average grant is $2,752 per student, but 80% of eligible students receive nothing from a total $35.5 million disbursed.

Recent events in Illinois, which froze its need-based aid program in 2015 due to a budget crisis, are instructive. Public colleges reported students dropping out, taking out bigger loans and cutting their course loads. At least 1,000 students who had initially been awarded a Monetary Award Program (MAP) grant, only to have it cut, didn’t return for the 2016 spring semester.

Jocelyn Ramirez, a student at Wilbur Wright College in Chicago, is the first in her family to go to college. After losing her MAP grant, she said, she had to take two classes instead of four, increase her work hours and move back in with her parents. She now shares a bedroom with her husband and six-year-old daughter while her 12-year-old sister sleeps in the living room. She has been working 40 to 50 hours a week as a medical assistant and hopes to graduate with her associate degree this spring, having enrolled in the two-year program in August 2014.

“My friends and I have a hashtag we use — #TeamNoSleep,” said Ramirez, 24. “With homework and my job, I usually get four to five hours a day of sleep. I’m always tired, but lots of students are in similar boats.”

Related: In an era of inequity, more and more college financial aid is going to the rich

Even now that the Illinois funds have begun to flow again, eligible students are still being turned away. Last year 58 percent of eligible students — more than 168,000 — didn’t receive a MAP grant. For those whom MAP does serve, it is a very successful program: Even though low-income students nationally graduate at a much lower rate than their more affluent peers, MAP recipients graduate at about the same rate as other students at their colleges. The state doesn’t keep track of the income level or race of those turned away, but because more than half of the black and Latino populations at Illinois’ public universities are MAP recipients, the program’s underfunding has a disproportionate effect on these communities.

Ramirez’ and her friends’ struggles reflect not only the effect of insufficient aid for eligible students but also the rising cost of college. As recently as 2002, MAP  covered 100 percent of tuition for low-income students attending public colleges and universities. Now it covers two-thirds of the cost of community colleges and just 32 percent of the cost of public state universities.

The only way to achieve the impact you anticipate is to ensure that all eligible applicants can access the funds. Otherwise students with lower levels of college and financial aid knowledge are not going to receive the benefit, and those are the students we are primarily targeting.
Meredith Fergus
Minnesota Office of Higher Education

Illinois is hardly alone. In 2017, for the first time ever, public colleges and universities in more than half of the states (28) relied more on tuition dollars than on government appropriations, according to a recent report.

The spiraling costs are hitting low-income families the hardest; while tuition grew by more than 34 percent between 2008 and 2015, real median income grew by only 2 percent.

Some states have addressed budget crunches by lowering the maximum per-student dollar amounts of their grants — to as low as $700 per year. Advocates note that while some states fund all students, they may do so at very low levels, even while they have relatively high public university tuition. For example, Florida’s average grant is a few hundred dollars less than Vermont’s, but Vermont’s average in-state tuition is roughly two-and-a-half times that of Florida’s, so Florida’s grant goes much further.

“Not fully funding a program makes no sense,” said Meredith Fergus, a senior staffer at Minnesota’s Office of Higher Education. “The only way to achieve the impact you anticipate is to ensure that all eligible applicants can access the funds. Otherwise, students with lower levels of college and financial aid knowledge are not going to receive the benefit, and those are the students we are primarily targeting.”

This story about state financial aid was produced by The Hechinger Report, a nonprofit, independent news organization focused on inequality and innovation in education. Sign up for our newsletter.