The Supreme Court’s decision Monday in favor of a Colorado baker who refused to make a custom wedding cake for a gay couple will have relatively little impact in Connecticut, local observers say.

The case, which evolved from a 2012 incident at Colorado’s Masterpiece Cakeshop, was decided on narrow grounds using case-specific rationale that, according to legal experts, does not implicate Connecticut’s current anti-discrimination laws. 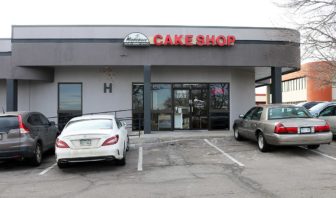 The Masterpiece Cakeshop in Lakewood, Colorado.

“Yesterday was a narrow ruling that was based solely on what had happened in the state agency in that case,” said Dan Barrett, legal director of the American Civil Liberties Union of Connecticut (ACLU-CT). “It does not affect the application of anti-discrimination laws in Connecticut.”

Barrett noted that, although this specific ruling allowed the Colorado baker to invoke his religious beliefs as means for justifying unequal service to a gay couple, the court did not compromise the overall right of states to protect their citizens against discrimination.

“The court made a point to say states like Connecticut have an interest in protecting people from discrimination; and specifically [discrimination against] LGBTQ people is something that states can guard against,” Barrett said.

Barrett was referring to Justice Anthony M. Kennedy’s statement in the majority opinion  that, outside of this specific cases’ confined circumstances, business owners have no guaranteed First Amendment right to discriminate on the basis of religion.

“It is a general rule that [religious and philosophical] objections do not allow business owners . . . to deny protected persons equal access to goods and services under a neutral and generally applicable public accommodations law,” Kennedy wrote.

Two Connecticut restaurant owners, Richard Rosenthal of the Max Restaurant Group in Hartford and Gordon Scott of Scott’s Jamaican Bakery in Hartford, backed the Colorado plaintiffs as signers of an amicus brief in the case. The Colorado ACLU represented the the plaintiffs,  David Mullins and Charlie Craig.

But while the decision did not directly jeopardize any anti-discrimination legislation in Connecticut, some gay-rights activists believe the ruling may present an indirect hurdle to enforcing these laws in the state.

This ruling “invites continued litigation on the question as to whether individual religious beliefs can ….weaken anti-discrimination laws,” said Leslie Gabel-Brett, former chairwoman of the state Commission on Human Rights and Opportunities (CHRO) and current gay rights activist.

At the same time First Amendment advocates applauded the Supreme Court for upholding the constitutional right to religious tolerance — a right that, according to Peter Wolfgang of the Family Institute of Connecticut, the state has failed to protect in full.

The high court “ruled against Colorado because it showed ‘a clear and impermissible hostility’ toward Jack Phillips’ religious beliefs motivating his objections,” Wolfgang said.  “It said the government elevating one view of what is offensive over another sends a signal of official disapproval of his religious beliefs.”

“The ‘official disapproval of his religious beliefs’ is what we’ve been getting from our state government for years. We got it every time Gov. Malloy called the future vice president of the United States a bigot. So we are glad the U.S. Supreme Court has hopefully set our governor straight on that.”

The Supreme Court case reviewed the Colorado Civil Rights Commission’s ruling that  cake-shop owner Phillips violated the state’s public accommodations law  in declining to custom-make a wedding cake for the gay couple. The incident took place at a time when gay marriage was not yet legal in Colorado, and Phillips held that his Christian beliefs prevented him from exercising his artistic talents to endorse gay weddings.

“I think Connecticut is one of the fairest and clearest places for the protection of LGBT rights,
Leslie Gabel-Brett
Former chairwoman Connecticut CHRO

The court’s decision that the Colorado Civil Rights Commission violated the freedom of religion clause, Kennedy cited its hostility and anti-religious bias toward Phillips’ beliefs.

“The neutral and respectful consideration to which Phillips was entitled was compromised here,” Justice Kennedy wrote. “The Civil Rights Commission’s treatment of his case has some elements of a clear and impermissible hostility toward the sincere religious beliefs that motivated his objection.”

Legal experts say the majority opinion gave little-to-no insight on the overarching constitutional issue of religious liberties clashing with gay rights, with the opinion leaving the negotiation of future similar cases up to the states.

“The outcome of cases like this in other circumstances must await further elaboration in the courts,” Justice Kennedy wrote, “all in the context of recognizing that these disputes must be resolved with tolerance, without undue disrespect to sincere religious beliefs, and without subjecting gay persons to indignities when they seek goods and services in an open market.”

The decision leaves open-ended a number of similarly situated cases that invoke religious freedom and equal protection spanning across the country, including a flurry of incidents involving photographers, bakers, florists, and other businesses.

Since its passage of the Civil Rights Act of 1991, which barred businesses from discriminating on the bases of sexual orientation, Connecticut has seen few high-profile discrimination complaints dealing with gay and lesbian couples. The law, along with Connecticut’s legalization of gay marriage in 2008 and its addition of gender identity to the list of equal protection classifications in 2011, assured widespread rights to the LGBT community in the state, according to Gabel-Brett.

“I think Connecticut is one of the fairest and clearest places for the protection of LGBT rights,” Gabel-Brett said. In dealing with anti-discrimination legislation, Gabel-Brett believes the state “has a longstanding history of enacting strong and appropriate laws.”

Coinciding with the wave of gay rights legislation, religious-freedom activists campaigned to protect individuals from violations of their faith.  Following the legalization of gay marriage in 2008, the Family Institute played an instrumental role in securing “one of the strongest liberty exemptions to same sex marriage into the country,”  Wolfgang said.

The organization leveraged the codification of same-sex marriage to gain legislative protections for religious liberty.  In doing so, the  Family Institute secured rights for religious organizations such as the Knights of Columbus, churches, and adoption agencies in allowing them to exercise their anti-gay-marriage beliefs in public.

Connecticut’s diametric approach to discrimination and religious protection has carved a comparatively peaceful path for the state in balancing civil rights, given the low number of discrimination complaints presented by the state CHRO.

Nonetheless, state lawyers claim Connecticut continues in its struggle to strike a balance between the civil liberty to practice religion and the civil right to equal protection.

“People are continuing to face unequal treatment,” said Jennifer Lebi of the Gay and Lesbian Defenders of Boston. The organization has worked closely with Connecticut legislators in establishing protections for the LGBT community. While Lebi believes Connecticut  has progressed in its understanding of acceptance and equal protection, the Supreme Court’s decision in Colorado underscores the importance of discrimination laws in all states.

“[Discrimination laws] are an important way to make sure that LGBT individuals are not stigmatized or demeaned.”

Tommy Gagne, a gay resident of Glastonbury, recognizes Connecticut as a relatively accepting state when it comes to gay rights, though he still battles occasional discrimination in the public sector.

“I’ll be waiting tables … and some lady will be totally turned off and start whispering anti-gay things under her breath,” Gagne said, recalling one of the discriminatory encounters he’s faced .  “This lady would roll her eyes at me, not look at me, wouldn’t tip me at all. And the whole time she’s saying nasty things under her breath to her friend.”

But outside of these customer-related incidents, Gagne says he has not “suffered to the point of me really noticing or being really bothered.”

Masterpiece Cakeshop v. Colorado Civil Rights Commission may not have resulted in the landmark decision some gay-rights activists and religious-freedom protectors were expecting, but both Wolfgang and the ACLU-CT point to the more symbolic effects of the ruling.

“At the very least, it means that the government in the state of Connecticut has to be very careful in what it does,” Wolfgang said. “It cannot punish religiously motivated people.”

But ACLU-CT maintains that the court did not set any nationwide precedent validating discrimination on the basis of religion, leaving the issue largely up to the states.

“Despite arguments from the Trump administration and other opponents of LGBT equality, the U.S. Supreme Court didn’t decide that any business has a right to discriminate against customers because of who they are,”  an ACLU-CT blog post by James Esseks says. “Instead, the court’s decision affirms again and again that our nation’s laws against discrimination are essential to maintaining America’s open society and that states can pass and enforce those laws, including in the context of LGBT people.”

All four applicants responded to the ACLU of Connecticut's survey.

The Waterbury man died after suffering a contusion to the back of his head during a fall.

Inmates expressed concerns about housing and employment discrimination, and fear over licensure and life insurance for people with criminal records.

The measure could make it easier for people with criminal convictions to secure housing or get a job.