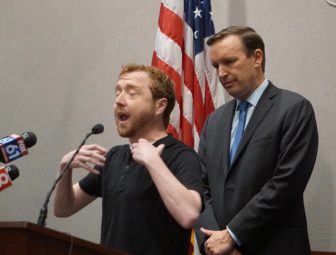 At a press conference in Hartford, the senator was joined by three advocates in criticizing the Trump administration for refusing to defend provisions of the Affordable Care Act that required most Americans to carry health insurance and protect consumers with pre-existing conditions.

“We’re here today because insurers are beginning to file their rate increases for the coming year, and the increase that have been announced thus far are absolutely catastrophic,” Murphy said.

Last year, Trump signed a Republican budget that repealed the penalty for Americans who fail to carry health insurance under terms of the Affordable Care Act, undermining the so-called individual mandate.

“By repealing the individual mandate, you suck millions of healthy individuals out of insurance pools, which drives rates up for everyone that remains, which tend to be predominantly people with healthy issues, some times serious health issues,” Murphy said.

Fidelis, a major health insurer in New York, is seeking a 39-percent rate increase, blaming two-thirds of the jump on the anticipated consequences of insuring a pool of sicker and more expensive policy holders.

Ten days ago, the Trump administration further roiled the insurance markets by informing a federal court it would not defend a legal challenge by Texas and 19 other states of the constitutionality of the individual mandate and the provisions on pre-existing conditions.

Murphy was joined Monday at the Legislative Office Building by three supporters of the ACA: Jonathan Miller, who has cystic fibrosis; Nancy Burton, the chair of the Universal Health Care Foundation; and Roger Levesque, a cancer-awareness advocate.

Miller, 28, said the ACA first allowed his parents’ insurance to cover him until age 26, then allowed him to buy a policy in a marketplace in which insurers no longer could deny coverage to persons with pre-existing medical conditions.

“This law has literally saved my life in ways that are hard to measure,” he said.

Murphy is seeking re-election this year to a second term in what is likely to be a lopsided campaign, at least based on available resources: As of April 21, Murphy’s campaign had $7.7 million in available cash, while none of his Republican opponents had $50,000.

“I’m not raising it in the context of the campaign,” Murphy said of the issue. “I am worried that the rate increases that insurers in Connecticut are going to propose are going to be enormous, and I want to make sure people understand why that is happening.”

Matt Corey, the convention-endorsed Republican opposing Murphy, said he supported the repeal of the individual mandate and the Trump administration’s refusal to defend the provision on pre-existing conditions.

“I support the president’s approach,” said Corey, who owns two small businesses, a window-washing company and a bar.

The mandate requires millennials to buy coverage they may not need and cannot afford. He said would rather see consumers with pre-existing conditions get coverage through a high-risk pool.