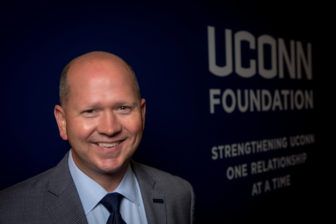 The leader of the University of Connecticut’s fundraising arm for the past five years will leave his post in mid-August to return to an executive fundraising post tied to Emory University in Atlanta.

UConn Foundation President and CEO Joshua R. Newton will resign after raising nearly $400 million during his tenure — an accomplishment the foundation touted as “the most prolific” in its history.

“I have worked closely with top fundraisers at great universities around the nation for over 20 years, and Josh is one of the best — without question,” said UConn President Susan Herbst. “His stellar strategic sensibility, student focus, and understanding of higher education are unusual, and I will miss him immensely.”

Fundraising under Newton was up 46 percent compared with the five years prior to his arrival while the foundation’s endowment grew by 30 percent, from $339 million five years ago to $439 million through this past March.

Newton also oversaw the recent integration of the university’s alumni association with the UConn Foundation, along with expansions in programming and services.

“I’m proud of what our team has been able to accomplish in such a short amount of time,” Newton said. “The only reason I was able to attend college was because of scholarships, so raising funds for low-income and meritorious students has always been a passion of mine.”

Newton added that the foundation’s recent success goes beyond the fundraising numbers.

“We’ve elevated philanthropy at UConn by focusing on building lasting relationships with donors and alumni,” he said. “These connections transcend any one person and I’m confident UConn is well-positioned for great successes in the years ahead.”

Newton will become senior vice president for advancement and alumni engagement at Emory University, where he worked for more than 10 years before coming to UConn.

The foundation released a statement indicating its board of directors will name an interim president in the next few weeks to serve while it conducts a national search for Newton’s successor.