Malloy warns Democrats veto overrides could hurt them at the polls 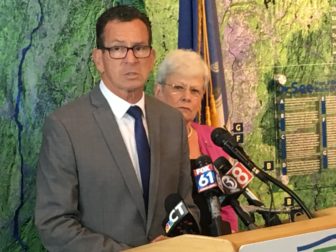 Gov. Dannel P. Malloy cautioned his fellow Democrats in the legislature Wednesday that pressing bills that would limit the state bailout of Hartford and the governor’s authority over education aid could inflame urban voters at the wrong time.

Lawmakers are considering overriding seven vetoes Malloy ordered after the regular 2018 legislative session closed on May 9. One of those measures is designed to effectively end the state’s fiscal bailout of Hartford after five years. The second would prohibit the governor from reducing education grants to school districts once a new fiscal year is underway.

“There’s no shortage of political parties willing to shoot themselves in the foot on any given day,” Malloy said while answering reporters’ questions following an unrelated bill signing at the Connecticut Science Center.

The bailout measure Malloy vetoed would have reduced non-education aid to the capital city by an amount equal to the emergency debt assistance Connecticut contractually pledged to Hartford this spring after five years. It set the same limit for any similar bailout of another distressed community.

It also would have stipulated that the state’s Municipal Accountability Review Board (MARB), a panel of fiscal policy experts which crafted the debt assistance deal for Hartford, could not do so for another city or town in the future without first clearing the plan with the legislature’s budget-writing committees.

The state already has committed to pay off the entire principal on Hartford’s general obligation debt, about $534 million, over the next two or three decades — as well as an undetermined amount of interest.  The total will depend on how the city’s debt is renegotiated with bondholders.

Many legislators from both parties said they only envisioned the state would provide debt assistance to Hartford this fiscal year and next when they established the MARB panel and authorized relief last October.

Malloy called the bailout deal “a boon to the value of Connecticut bonds” and said without it, Wall Street likely would demand higher interest costs from the state and from dozens of distressed cities and towns seeking to borrow funds to finance municipal projects.

“I think if Hartford had gone bankrupt — and they were for all intents and purposes bankrupt — that would have had a profound disruptive impact on Connecticut’s ability to finance its state functions,” the governor said.

Republican legislative leaders led the charge to restrict the Hartford bailout after the debt deal was announced.

And while the bailout restriction measure passed by more than the two-third’s margins that would be needed again for a veto override — 28-6 in the Senate and 105-45 in the House — many urban lawmakers objected.

Those from Hartford and other cities said they feared the measure would prohibit Connecticut from adequately assisting other distressed communities in the future.

Democrats long have counted the state’s urban centers as a key part of their political base. And Malloy urged Democratic lawmakers Wednesday to think twice before committing to an override vote on this measure.

“Quite frankly, anybody living in any urban area who would sign on to that Republican package should have their heads examined,” he said.

“Clearly he has no idea what the public thinks of his policies which have led to Democrats losing seats and trying to distance themselves from the governor as much as possible,” said Senate Republican leader Len Fasano of North Haven. “ … This is the governor making a preemptive strike to try to dissuade the legislature from working together to reverse his vetoes.”

Both Aresimowicz and Looney voted for the bailout restrictions bill, and both have said they believe the legislature originally intended to limit debt assistance to Hartford to two years.

Malloy raised similar concerns Wednesday about another bill he vetoed — the one limiting the governor’s authority to scale back education grants to communities once the fiscal year is underway to meet savings targets mandated by the legislature.

And Malloy has noted in recent years that legislators — despite raising lapse targets considerably — still react with shock and blame when he achieves the mandated savings.

The governor, who was tasked by legislators this past fiscal year with finding an unprecedented $881 million in General Fund cost savings once the budget was in force, lopped $91 million off town aid — nearly half of which came from Education Cost Sharing grants.

The governor also said that while he had no choice but to reduce education grants somewhat to achieve the savings lawmakers mandated, he imposed the cuts more heavily on the state’s wealthiest school districts.

And while the bill limiting the governor’s power to reduce grants also passed by wide margins in both chambers, some urban lawmakers again objected, noting that the governor’s reductions are one of the few ways Connecticut has been able to redistribute aid along wealth lines.

Legislative leaders from both parties have said they believe Malloy still could have hit the savings targets without trimming town aid by cutting more deeply into executive appointments, overtime and other personnel costs.