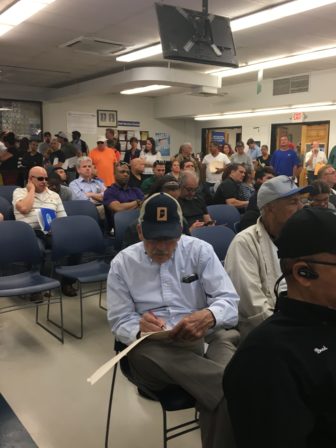 Michael Thomas was suffering through a two-and-a-half hour wait at the Department of Motor Vehicles office in Wethersfield on a recent afternoon when Gov. Dannel P. Malloy appeared on the TV  in the corner of the crowded, dingy room.

Thomas watched as Malloy cut the ribbon for the DMV’s newly opened self-serve licensing renewal kiosks in Milford, and sighed.

“I still have 15 minutes to go,” Thomas said, glancing over at a monitor that displayed the customer wait time. “If I had to drive longer just to wait a shorter wait time, I would do it.”

If Thomas lived on the shoreline, he might have shortened his wait by a couple of hours. But for Wethersfield DMV customers, a long wait is a common experience, with lines akin to those at a Disney World theme park.

While lines snake through DMV’s regular branches, however, Milford’s self-serving kiosks, or Express Centers, boast a much shorter trickle of customers whose wait time averages no more than 20 minutes.

The Express Centers opened as a joint product of the DMV and Nutmeg State Financial Credit Union on June 6, 16 months after AAA Northeast stopped renewing licenses in its Fairfield and New Haven County branches.

The purpose of the licensing centers is to divert the state DMV’s nearly 6 million license and registration customers from overburdened regular branches to other, satellite locations.

DMV Commissioner Michael Bzdyra said it is too soon to tell just how effective the centers have been in expediting service, but he is optimistic.

“We think [the Express Centers] will have a positive impact on reducing the congestion in our branches,” he said.

Bzdyra lauded the centers as just one of the successful initiatives the administration has piloted in recent years. Since assuming his role in 2016, the commissioner has focused on modernizing the agency to expedite wait times and improve customer service, all in an effort to combat the DMV’s reputation as the most inefficient state agency.  In 2016, the DMV announced it had cut wait times in northern branches nearly in half since the previous year, when a computer system update resulted in massive delays.

DMV Chief of Staff Bill Seymour said that the average wait time in its main offices is about one hour, though the number can change dramatically depending on the time of day.

Bzydra said the DMV undertook an intense effort to organize a well-rounded agency that incorporates “frontline workers and managers….to do what we can do to streamline customers.”

Within the past two years, the administration has minimized the amount of paperwork customers must complete to make their transactions, shifted a number of services to online platforms, and adopted an initiative in the southern parts of the state to partner with local organizations to provide driver licenses and identification renewals.

It worked with West Haven last year to implement license renewal accommodations similar to those offered in the new Express Centers–in hopes of improving branch traffic down state. The wait time at the West Haven City Hall Express Office averages 15-30 minutes, with just a five minute average wait in the afternoon.

“This type of exploration… that he is doing with the deputy commissioner hasn’t happened at least in the last 20-30 years here,” Seymour said. “We are preparing this agency to be a modern DMV.”

But not all areas of the state have been enjoying the recent improvements. Benefits of Bzdyra’s expediting efforts are largely confined to the Fairfield and New Haven County areas, and even patrons of these branches routinely encounter well over two hour lines at their regular DMV branches.

The agency is planning to keep its focus on southern Connecticut, with a goal of implementing eight more licensing centers to cover the locations that suffered from the AAA Northeast loss.  AAA Allied Club still provides DMV services in northern Connecticut, and holds offices in Avon, Cromwell, Enfield, Manchester, Old Saybrook, Waterford, and West Hartford.

“The Commissioner first wanted to have [the express centers] in southern Fairfield County because of customer demand,” Seymour said. “It fell into a strategic geographic area that fit our target demographic.”

The Wethersfield DMV and its surrounding branches use their own form of express line service, but the branch’s clerk, who declined to give her name,  says the accelerated process is reserved for the “fast stuff” only, including handicap permits, inspection paperwork, and address changes.

As of now, the DMV is not planning on hosting express centers via third-party operations in northern Connecticut. The centers, do, however, piggyback on other statewide efforts DMV leaders piloted, including a new greeting and ticket system which eliminates the need for customers to wait on site.  Staff examiners review customers’ documents upon entering the DMV, ensuring they have the proper paperwork to complete their transactions before receiving a ticket.

Bzdyra said the process relieves lines from ill-prepared customers,  and those who do make it through are able to get their transactions finished faster.

“I get positive feedback, if not daily, saying that getting that the ticket has been very helpful in the overall customer experience,” Bzdyra said.

The agency also says it is looking into expanding its scheduling system to allow customers to make appointments for services across all branches, as it currently does with learning permit and road skills tests.

But with no appointments on the near horizon or recent statistical evidence to support the benefits of the ticket system on alleviating wait times, the DMV’s efforts in northern Connecticut remain just that: efforts.

Bzdyra and Seymour believe online services, if they gain enough traction, will revolutionize the DMV to reflect the demands of the technology-dependent generation.

Though the DMV sends written letters to drivers due for license renewals urging them to complete their transaction online, Seymour says many customers, specifically the older cohort, are uncomfortable with online transactions and opt for in-person service, suffering the wait as a consequence.