Ned Lamont accepting the Democratic endorsement on May 19.

Different races, different times, different messages. In 2006, Ned Lamont hired an iconoclastic outsider to help frame his insurgent, anti-war U.S. Senate campaign. In 2010, during his more conventional run for governor, he went with a mainstream Democratic ad man. This year, Lamont has hired Putnam Partners, a big gun in political advertising with a client list topped by Barack Obama.

Now, Democrats are eager to see if the firm led by Mark Putnam can find a fresh, engaging take on the party’s presumptive gubernatorial nominee, a candidate one Republican already is working to brand as “Retread Ned.” Other GOP candidates — and there are five in the Republican primary — are spending money on TV and social media tying Lamont to the unpopular Democratic incumbent departing after eight years in office, Dannel P. Malloy.

The race to define Lamont is on.

“Our plan is to get up and start communicating a message before too long,” said Marc Bradley, the manager of Lamont’s campaign. Asked when Putnam’s work might debut on Connecticut’s airwaves, Bradley demurred. “I hate to ruin the surprise for everybody.”

Democratic operatives not working on Lamont’s campaign, some who have wondered privately why he is not already on the air, say Lamont has chosen an ad maker with a knack for humanizing candidates in commercials that can stand out in the clutter of political advertising. And he has fans among Republicans, as well.

“Mark Putnam is one of the few political media consultants who isn’t afraid to push the envelope and be different,” Jon Downs, a Republican competitor, said in an admiring New York Times profile in 2014, when Democrats were sailing against unfavorable winds. “He has a high-risk, high-reward approach to his advertising and I respect that.”

His niche in the mid-term elections four years ago was finding ways to emotionally connect Democratic incumbents to voters in red-leaning states. His challenge this year in Connecticut is to sell another Democrat to an electorate bombarded by a steady diet of news about chronic budget shortages, massive unfunded pension liabilities and slow jobs growth. 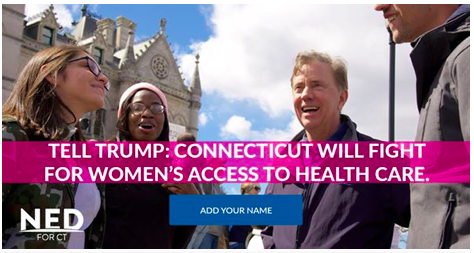 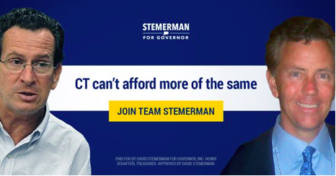 In Putnam Partners, Lamont is turning to a firm that used nostalgia over the return of Narragansett beer to help elect Gina Raimondo governor of Rhode Island, subjected U.S. Sen. Mark Begich of Alaska to frostbite in a much-praised spot requiring him to speed through subzero temperatures on a snowmobile, and repeatedly put a fully-clothed Colorado Gov. John Hickenlooper in a running shower.

Hickenlooper’s first race for governor in 2010 included a spot meant to inoculate him from negative ads. Over a montage of a fully-clothed Hickenlooper in a shower, the candidate pledged to run a clean campaign, saying negative ads made him want to shower, and they don’t help anyone. “Besides,” he said, “we need the water.”

Putnam, however, hardly shies away from negative advertising. His portfolio includes an understated, yet powerful black-and-white spot for Obama constructed around the secretly recorded audio of Mitt Romney saying that 47 percent of Americans would never vote for him, because they see themselves as victims entitled to housing, food, “you name it.”

This year, a cinematic introductory video crafted for Democratic congressional candidate MJ Hegar by Cayce McCabe, a Boston political operative who joined Putnam in 2014, went viral, immediately raising the profile of Hegar, a decorated former Air Force helicopter pilot. She won her primary. McCabe is one of the Putnam partners assigned to Lamont.

“That’s what attracted us to them,” Bradley said. “From the minute they sat down with us at the first meeting, they understood what we were trying to do. They understood who Ned Lamont was. They’re going to help us tell Ned’s story. We’re very confident of that.”

Lamont, 64, is the founder of a cable company that competed with major cable providers on college campuses and other locales by establishing small, customized systems for a cheaper price. In 2006, he became an overnight figure in national politics by challenging U.S. Sen. Joseph I. Lieberman in a primary over his support for George W. Bush’s conduct of the war in Iraq. Lamont won the primary, only to lose to a petitioning Lieberman in the general election.

Putnam Partners is the second political messaging consultant hired by Lamont in 2018. Lamont opened his campaign in January with a two-minute video produced by KullyStruble of Seattle, which did no further work for the campaign after producing the video and establishing a web presence. Lamont has been talking to Putnam Partners since spring, Bradley said.

In the introductory video, Lamont distanced himself from the political establishment, calling Connecticut a beautiful state “that’s been failed by the political class for 30, 40 years.” He promised a bolder campaign than he waged in 2010 against Malloy, who ran to the left of Lamont by promising to support legislating mandated paid sick days.

“I’ve always broken a little china. I kind of enjoy breaking china,” Lamont said then. “I did it in my business. I did it in the Joe Lieberman campaign. And I was ready to do it in 2010. People weren’t ready to break china then. I think they are now.”

So far, the china remains unbroken, his campaign a standard Democratic appeal to the party’s base, especially labor. Unlike all five Republicans, who are hewing a standard GOP line of no new taxes, Lamont said he is looking at some form of electronic tolling to stabilize the state’s nearly empty special transportation fund and expects to raise taxes on the state’s wealthiest residents.

Republicans have capitalized on an awkward radio interview in which he is pressed on whether he would raise taxes. After a silence, Lamont replies, “Yes.”

Jon Conradi, a senior adviser to Timothy Herbst, the candidate responsible for the “Retread Ned” gibe, said the tax position allows Republicans to tie Lamont to Malloy on taxes, even though Lamont opposed Malloy in 2010.  “I think Ned Lamont has already lost the one possible card he had to play, which is he is not tied to the Malloy agenda, by saying he intends to raise taxes,” Conradi said.

Bradley said Lamont was speaking narrowly about taxes, and he believes his candidate ultimately will be rewarded for speaking realistically about the budget. By contrast, he said, some Republicans are promising to eliminate the state income tax, whiles others insist the state’s contractural pension commitments to retirees are not binding.

Lamont, who played a matchmaker’s role in helping to attract the  information technology company, Infosys, to Hartford, will be focusing on how a Democrat with a business background can help improve Connecticut’s business climate, grow jobs and stabilize the state’s finances.

“His business was about better services at a third of the prices. He took on those cable companies and beat them in the college sector and health sector,” Bradley said. “That’s the message.”

Of course, there also is a more immediate issue: What To Do About Joe?

Joseph P. Ganim, the Bridgeport mayor whose record includes 14 years in city hall and seven in federal prison, was soundly rejected by organized labor and delegates at the Democratic state convention, but he successfully petitioned to force a primary on Aug. 14.

Lamont’s campaign has yet to demonstrate it has settled on how to handle Ganim’s constant needling of Lamont, who is largely self-funding his campaign, over his wealth, Greenwich mailing address, and even the sincerity of his volunteer teaching in a Bridgeport high school years ago.

Ganim, whose public-corruption conviction in 2003 bars him from Connecticut’s public financing program, cannot compete financially with Lamont, who wrote his own campaign checks for $9 million in his losing fight with Malloy in 2010.

“We’re taking this seriously. When it comes to Ned running right now, we’re running a primary and we’re fighting for every single vote,” Bradley said. “And that will happen until Aug. 14. As long as Joe is in the race, we’re taking him seriously.”