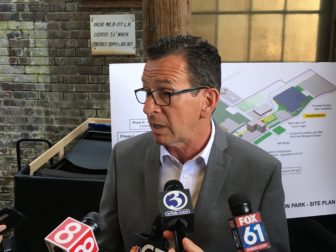 The complex, called the Energy & Innovation Park, is being developed on a portion of the Stanley Black & Decker site in the city’s downtown.

The project is expected to generate about 3,000 direct and indirect jobs, more than $200 million in tax revenue for the state, and another $45 million for the city over the next decade. Construction is slated to begin in early 2019.

“These are exactly the type of innovative, high-tech jobs that we want to bring to Connecticut, and this forward-thinking project will bring a new kind of excitement to New Britain and the region,” Malloy said. “Connecticut’s highly educated and talented workforce is exactly the kind that growing, high-tech companies are demanding.”

The project does not rely on any direct economic development loans or grants from the state at this time, though the state would purchase surplus power from the site for use on the electric grid.

But while the governor declined to provide specifics, he said state economic development officials expect this project to spur on related proposals involving complementary operations, and state incentives — along with job creation benchmarks — likely would be involved at that point.

“It’s entirely likely that the state will play a role in further development of the site beyond our agreement to purchase power here,” Malloy said. “But we are in competition for jobs, we do compete, and — quite frankly — we’re on a winning streak.”

The governor announced in March that Infosys, an India-based information technology company undergoing a major expansion in the U.S., had selected Hartford as one of its new technology-and-innovation hubs, promising an estimated 1,000 new jobs to a city.

This latest project, the governor said, stands out with its pairing of reliable, clean energy with a potential for high-speed data processing and storage. This aspect of the project stems from a fuel cell proposal selected earlier this month by the state Department of Energy and Environmental Protection in response to a request for proposals. 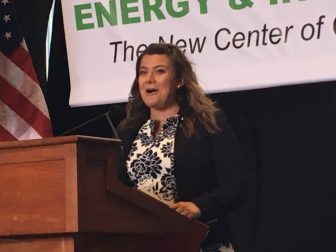 Development of the fuel cells alone, which will be manufactured by Doosan Fuel Cell America of South Windsor, would make this the world’s largest indoor fuel cell installation.

The project initially would generate nearly 20 megawatts of energy while taking up just 45,000 square feet in a currently empty industrial building on the Stanley Black & Decker site. Ultimately, the cells would provide 44 megawatts of energy for the center.

New Britain Mayor Erin Stewart said the complex, “will have long lasting impacts on the vitality and direction of our City that we haven’t seen in our community since the likes of the industrial manufacturing Golden Era decades ago. The Energy and Innovation Park, once completed, will create one of the largest private investments in new technology that the state has ever seen.”

‘We have thrived through three industrial revolutions and are well positioned as we embark on the fourth, which is in process today, driven by the technological revolution. … This is another step on the long road back to fiscal stability and economic competitiveness for Connecticut, and we are proud to be doing our part to help with an ideal reuse of one of our manufacturing facilities.”