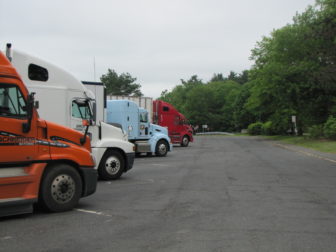 Connecticut’s truck drivers and other motorists that use diesel fuel faced their first tax hike this week in five years, paying an extra 2.2 cents per gallon.

The head of the state’s largest trucking association said while the hike is relatively modest, it is an important reminder — especially while the debate on electronic tolling continues — that Connecticut already has one revenue source that draws fees from out-of-state motorists.

“This is one tax where it doesn’t matter where you buy your fuel,” said Joseph Sculley, president of the Motor Transport Association of Connecticut, which represents more than 800 trucking and trucking-related businesses. “It is not a huge jump. But what this means is we will collect more revenue from those out-of-state trucks.”

In 2008, the General Assembly fixed a complicated formula in the law that sets the diesel rate each July based on an analysis of wholesale prices in both diesel fuel and gasoline during the prior 12 months.

But unlike the regular gasoline tax, the diesel levy brings money into the state’s coffers — in some cases — even when motorists don’t actually stop and fuel up in this state.

That’s because Connecticut participates in the International Fuel Tax Agreement (IFTA,) a revenue-sharing arrangement between the lower 48 states and the Canadian provinces. Most large-class trucks operate with an IFTA license and must log miles and fuel usage throughout their multi-state trips. Revenues then are shared among all of the states the vehicle passes through follow a formula that also takes each state’s fuel tax rates into account.

Other diesel users, including buses, campers, pickup trucks and even certain cars, generally are exempt from this agreement.

Connecticut’s diesel tax generated about $106 million in the 2016-17 fiscal year, and Sculley’s group estimates about $15 million comes from out-of-state drivers.

The Motor Transport Association of Connecticut has been a strong opponent of establishing electronic tolling on state highways.

But even Sculley acknowledged a 2.2-cent increase in the diesel tax — expected to generate an extra $5 million to $6 million per year — would not provide sufficient revenue to settle the debate on tolls.

Others, including Gov. Dannel P. Malloy and Rep. Tony Guerrera, D-Rocky Hill, House chair of the Transportation Committee, say tolls would be an effective way to finance a major rebuild of Connecticut’s aging, overcrowded transportation infrastructure.

A bill that would have empowered the DOT to develop an electronic tolling system for consideration by the 2019 General Assembly died on the House calendar this past spring.

Connecticut does not have any local or county-level diesel fuel taxes. According to the American Petroleum Institute, which ranks states based upon local, state and federal rates, Connecticut motorists pay the ninth-highest combined diesel tax rate in the nation.