In statements after the nomination was announced, and at a press conference in Hartford earlier in the day, Blumenthal and Murphy said Trump’s insistence on a nominee willing to restrict abortion rights and sharply tilt the court to the right on a range of issues, including gun control, is unacceptable.

In a tweet shortly after the announcement was made on Monday night, Murphy wrote, “Brett Kavanaugh is an anti-consumer zealot, an opponent of preexisting condition protections, and a critic of abortion rights and access to contraception, a Second Amendment radical, and a bad choice for the Supreme Court. Not a close call. I will vote NO.”

Blumenthal retweeted a news story about Kavanaugh’s nomination, adding simply, “I am voting no.”

Kavanaugh, 53, is a graduate of both Yale University and Yale Law School and is a native of Maryland.  He is a judge on the U.S. Court of Appeals for the D.C. Circuit and served in both Bush administrations.

Earlier in the day, as they employed talking points certain to be heard in the campaign for control of the U.S. Senate, the two liberal Democrats said the Republican president had deferred to the conservative Federalist Society and Heritage Foundation in employing an anti-abortion litmus test on finding a successor to the court’s swing vote, Justice Anthony Kennedy.

Trump announced his choice shortly after 9 p.m. Monday.  He made his decision after reportedly narrowing his choice to Kavanaugh and Thomas M. Hardiman. Amy Coney Barrett and Raymond Kethledge also were under consideration. All four are federal appeals court judges, and Hardiman was the runner-up to Justice Neil Gorsuch in 2017.

The Connecticut senators spoke at a midday press conference in Hartford, correctly anticipating that one of the quartet would be named. Democrats immediately cast the choice Monday night as a major issue in the 2018 for Congress, and Blumenthal issued a more complete statement explaining that he would oppose Kavanaugh. 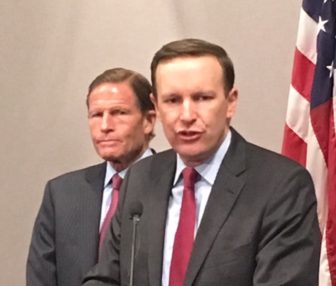 “Judge Kavanaugh has passed the Trump litmus test – screened and vetted by extreme right-wing groups that have made this president their puppet,” Blumenthal said. “Approval of this nominee would mean the crucial swing vote to destroy hard-won rights and liberties enshrined in long established law. This nominee will likely take the nation back to a dark time when abortion was criminalized – when women died and were denied access to contraception and the morning after pill.”

Nick Balletto, the chairman of Connecticut Democrats, said the nomination would color races for public office.

“The stakes in our next election could not be higher. Make no mistake, women’s reproductive health, health care, and gun safety legislation are now at risk,” Balletto said in a statement shortly after Kavanaugh’s nomination was announced. “Just a day after Republican gubernatorial candidates claimed that women’s reproductive health wasn’t an issue, Trump nominates a Supreme Court Justice that has the potential to set women’s health back decades.”

Connecticut has codified the elements of Roe v. Wade, the court decision guaranteeing a women’s right to choose whether to terminate a pregnancy, but the senators and others warned of a threat to abortion rights.

“It is not hyperbole to say that everything from marriage equality, to civil rights protections, to workers’ rights, to patient protections barring discrimination for preexisting conditions, to our already woefully inadequate gun safety laws would be in peril if President Trump’s nominee is confirmed,” Gov. Dannel P. Malloy said. “Most alarming however is Judge Kavanaugh’s avowed hostility to Roe v. Wade and women’s reproductive rights.  The purportedly pro-choice Republican senators should understand that a vote for Judge Kavanaugh is a vote to repeal Roe v. Wade.  It’s that simple.”

J.R. Romano, the state GOP chairman, put out no formal statement, but in an interview he dismissed the Democrats’ reaction as reflex.

“It didn’t matter who Trump would pick today. The Democrats are more focused on resisting. The president could have picked Chris Murphy, and the Democrats would have had a problem with that,” Romano said. “They’re just in a constant state of resist.”

A conservative group, the Judicial Crisis Network, posted digital ads backing Kavanaugh within minutes of the president’s announcement. The ads linked to confirmkavanaugh.com.

Trump, who announced during his campaign he would only consider anti-abortion nominees to the Supreme Court, said Monday night he only asked his potential choices whether they would uphold the constitution as written.

Blumenthal, a former state attorney general general who will question the nominee as a member of the Senate Judiciary Committee, said committee members and staff started working on a more aggressive approach to a confirmation hearing even before Kennedy announced his retirement.

“Questioning in the judiciary hearing is ordinarily courteous and even deferential. No more business as usual,” Blumenthal said. “The standards of ordinary deferences to answers that are evasive, canned or rehearsed should be abandoned. We need to be as direct and incisive as possible and then to use physical evidence — documents, past writings, records in a very dramatic and graphic way.”

Senate Majority Leader Mitch McConnell reportedly has warned the White House about the challenges involved in a picking a judge with a long paper trail, such as Kavanaugh, a judge for 12 years who previously worked in the White House under George H.W. Bush and was on the independent counsel staff that investigated Bill Clinton in 1994.

While the two Connecticut senators described all four potential nominees as extremists, they held a special scorn for Hardiman, whom they described as a Second Amendment extremist hostile to gun-control laws like the one passed in Connecticut after the Sandy Hook School massacre.

Kavanaugh is no better, Blumenthal and Murphy said.

Like Hardiman, they said, Kavanaugh does not believe the Heller decision, written by the late Justice Antonin Scalia, goes far enough to protect gun rights. In the Heller decision, the court held that the Second Amendment protects an individual’s right to a firearm, while allowing regulatory oversight — the degree to which has not been established by the court

“Hardiman is a true extremist on guns, but Kavanaugh has taken positions far to the right of the Scalia court on guns,” Murphy said during the Monday morning press conference. “If either of them becomes the nominee, I think you can expect them to be the most radical voice on the court on guns.”

Blumenthal said any of the four “would be a nightmare” on gun control, an issue that has been largely overlooked in the discussion about replacing Kennedy.

“The issue of gun-violence prevention has been largely, unfortunately disregarded so far, but I will be making it a major issue in the Judiciary Committee and in my questioning, because every one of these nominees would be absolutely abhorrent to anybody who cares about preventing gun violence in this country,” Blumenthal said.

In 2016, the U.S. Supreme Court declined without comment to consider a challenge by Connecticut gun owners to gun controls the state passed in response to the shooting deaths of 26 children and staff at Sandy Hook elementary school by a gunman armed with an AR-15, 30-round magazines and high-powered ammo.

The justices refused to review a decision by the U.S. Court of Appeals for the Second Circuit upholding the law, which expanded background checks for the purchases of firearms and ammunition and banned the sale of a list of semi-automatic weapons capable of firing high-powered ammunition from detachable, large-capacity magazines.

After asserting an individual right to own firearms 10 years ago in District of Columbia v. Heller, the court has consistently declined to hear cases that could define how far federal, state and local governments can go in restricting the sale and ownership of firearms without running afoul of Heller.

Scott Wilson, a co-founder of the Connecticut Citizens Defense League, the state’s largest gun-owners’ group, praised the nomination of Kavanaugh and criticized the senators for their negative view of guns.

“CCDL as an organization finds it peculiar that in the face of so many lifesaving uses of firearms that occur on a daily basis, not once do either of these politicians speak about the beauty of our constitutional right to keep and bear arms,” Wilson said. “Never does Murphy or Blumenthal speak of the everyday citizen, the natural right of self-defense, and the hundreds of thousands of lives saved every year by lawful gun ownership.”