WFP backs Lamont, but opts for Bermudez Zimmerman for LG 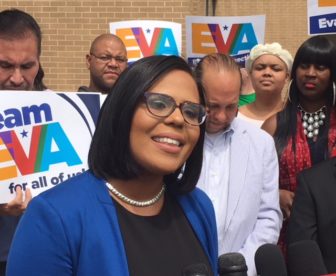 The Connecticut Working Families Party, a labor offshoot that promotes progressive issues, announced Tuesday it was backing Eva Bermudez Zimmerman for lieutenant governor in the Democratic primary over Susan Bysiewicz, the candidate endorsed by the Democratic state convention and gubernatorial candidate Ned Lamont.

The endorsement was not a surprise following the decision of the Connecticut AFL-CIO to also endorse Zimmerman, a 31-year-old union organizer whose candidacy quickly took flight in protest of Lamont failing to meet expectations he would choose a black or Latino running mate. Zimmerman would be the first Hispanic elected to statewide office in Connecticut.

The WFP also said Tuesday it was endorsing Lamont over Joseph P. Ganim for governor, and two other convention-endorsed Democrats facing primaries: Shawn Wooden over Dita Bhargava for treasurer and William Tong over Chris Mattei and Paul Doyle for attorney general.

Lindsay Farrell, the state director of the WFP, said the endorsement of Zimmerman was motivated by excitement over the prospect of a labor-movement ally winning statewide office and not antipathy towards Bysiewicz, the former secretary of the state trying to make a comeback eight years after leaving state office.

While it occasionally elects its own members, the Working Families Party spends most of its efforts promoting Democrats sympathetic to its agenda of a higher minimum wage, paid family medical leave, and a more progressive tax structure.

In the primary, the Working Families Party can offer help with voter outreach. In November, it can offer cross-endorsements that give Democrats a second line on the ballot. Farrell said the candidates endorsed Tuesday will be cross-endorsed if they win their primaries.

Lamont is the first gubernatorial candidate to be endorsed by the Working Families Party in a primary. In 2010, the WFP was neutral in the primary between Lamont and Dannel P. Malloy, then cross-endorsed Malloy in the close general election.

In 2012, it endorsed Chris Murphy over Bysiewicz in the Democratic primary for U.S. Senate.