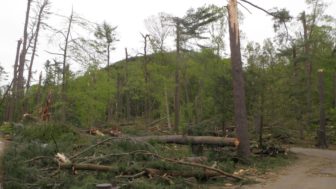 On the evening of May 15, dozens of children huddled in Hamden’s West Woods Elementary School as the town’s emergency responders wrestled their way through collapsed trees that blocked the entrance to the building.

The students, who had stayed after school for a reading program, were trapped in West Woods as a powerful band of thunderstorms, hail, and four successive tornadoes swept across Connecticut, cutting a swath of damage through parts of Fairfield, New Haven and Litchfield counties.

“It took eight hours for workers to carve their way through to the school building to get the kids out of there safely,” said Hamden Mayor Curt B. Leng, adding that many children were not reunited with their families until the next morning.

The students in West Woods were just a handful of the victims of the violent May storm, which killed two, injured 83, knocked out power to 182,000 residents, caused more than $13 million in damage and destroyed 25 homes statewide. The storm damage was so extensive, Gov. Dannel P. Malloy filed a request for aide with the Federal Emergency Management Agency last week.

The storm was even more destructive to homes than both Hurricane Sandy and Tropical Storm Irene, which destroyed 15 and 12 homes respectively, Malloy said.

The conjunction of tornadoes and strong winds during the May 15 storm wreaked havoc on roads, public facilities, power lines, and communities in western and southern areas of the state. In the moments following the storm, more than 20 emergency operations were activated and 10 municipalities declared states of emergency.

Malloy asked for federal assistance for three counties affected which, if approved, will reimburse state agencies and municipalities up to 75 percent for eligible costs. He also requested individual assistance, which will offer a maximum of $34,000 to residents for costs related to eligible uninsured damage to their house. The request covers Fairfield and New Haven counties, as well as New Milford, Bridgewater, and Roxbury in Litchfield County.

Some public facilities remain incapacitated to this day, most dramatically at the Sleeping Giant State Park in Hamden, where collapsed trees and residue have rendered the park inaccessible to visitors. With rolling hills, sheltered picnic areas, and 32 miles of hiking trails snaking through pined woods, the two-mile mountain attracts an average of 225,000 visitors per year–among the most of any Connecticut state park in the area. 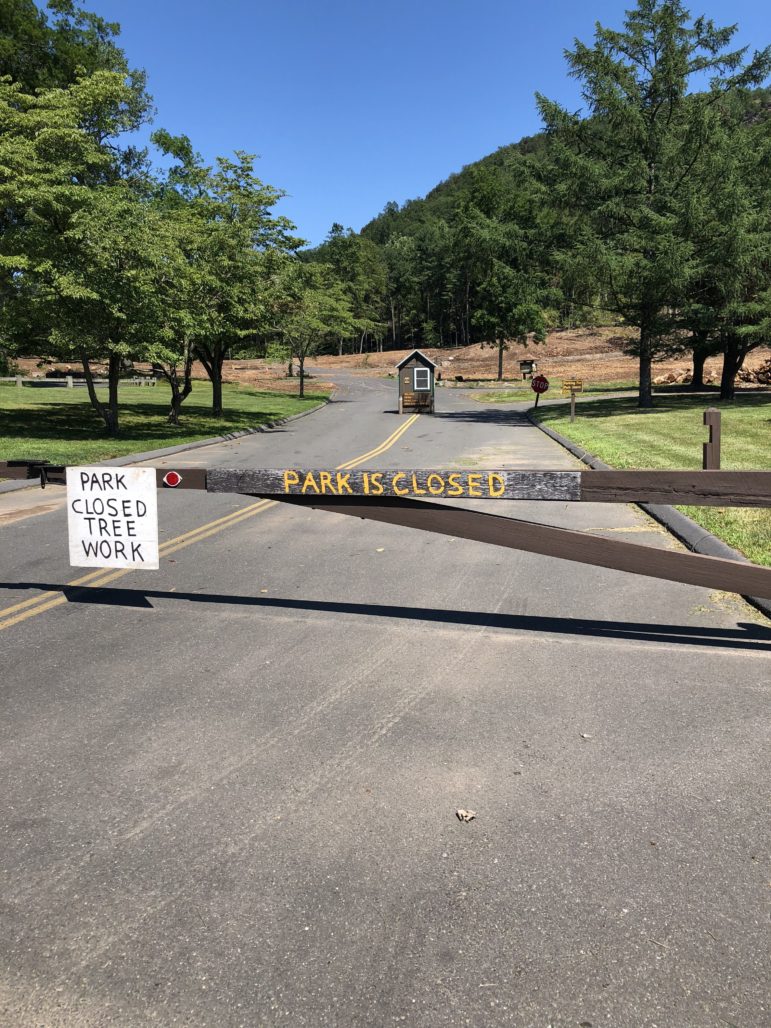 The Sleeping Giant Park Association– a collection of volunteers who sponsor yearly guided hikes, help maintain the park’s geological gems and publish a newsletter to attract visitors — are trying to keep park-goers away while DEEP nurses it back to health.

“We are all devastated by the damage to our beautiful park caused by the tornado and we want to help restore the park as soon as possible,” the SGPA wrote on its website. It added that the community can help in the clean up effort by staying away from Sleeping Giant. And yet, the park is so popular that DEEP had to build a temporary fence around its borders to prevent persistent visitors from entering and risking serious fatal injuries from unstable trees.

Four of the 110 state parks incurred some damage from the storm, but none was more devastated than Sleeping Giant, said Department of Energy and Environmental Protection Communications Director Chris Collibee.

The mountaintop is nearly unrecognizable. Broken tree limbs block access to the hiking system,  picnic tables are flipped upside down, and the pined areas decorating the park’s Tower Trail, which extends from the main entrance to the stone tower at the peak of the mountain, are replaced by unprotected dirt. All of the park’s bathrooms will need to be rebuilt.

“The damage of Sleeping Giant is very extensive,” Collibee said. “The park is closed for a reason — not just because we are trying to clean up and restore it — but because the park is not safe for the public to use.”

DEEP is working with Supreme Industry, a private agency that is using heavy duty equipment to clear tree limbs and debris. After the area is safe enough to perform clean up operations, DEEP staff will need to clear the hiking trails to make them walkable.

The work is strenuous if not outright dangerous, as workers regularly hear trees continuing to collapse in the woods surrounding the park, Collibee said.

In addition to Sleeping Giant, Wharton Brook Park in Wallingford also remains crippled from the aftermath of the storm. That damage, however, is confined to fallen trees, and while Collibee does not have an expected date to re-open Sleeping Giant, he says Wharton Brook will likely open by the end of summer.

In total, DEEP says it expects the cost of recovery to repair Sleeping Giant will be in the neighborhood of $500,000 to $1 million. 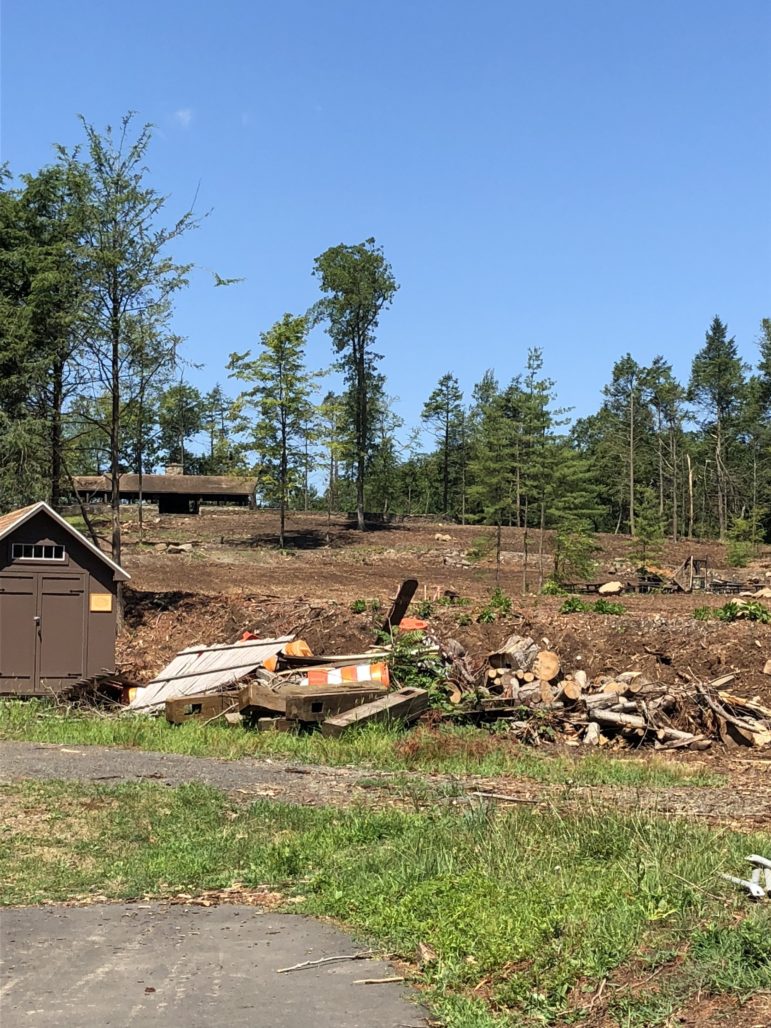 That number is about half of what Hamden will spend on town-wide recovery efforts.

“We had a really remarkable amount of damage. I’ve never seen anything like it before,” Leng said. “We are really thankful that we didn’t have any serious injuries.”

In Hamden, the winds took down roughly 1,500 trees, blocking off one third of the town for a few days. Immediately following the storm, town officials hosted potable water sources in facilities for residents whose water systems were impacted, and schools remained closed for nearly a week.

The clean-up costs, Leng says, will push $2 million dollars. But that number does not account for the private costs incurred by residents whose homes suffered uninsured damage.

“I’ve been going door-to-door to residents and saying, ‘This is the kind of disaster that the municipality has to have your back’,” Leng said.

Hamden is just one of the numerous local governments that is doling out millions of dollars for storm repair.

In his letter requesting FEMA assistance, Malloy said that the number of houses and personal items destroyed during the May 15 storm is “unprecedented” in Connecticut.

“Even at this early stage, the damage estimates are almost three times the state-wide per capita threshold of $5.2 million,” he said.