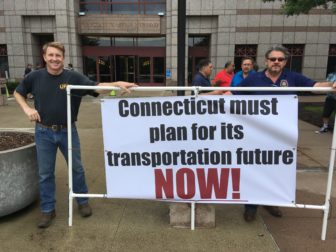 The State Bond Commission approved $10 million in financing Wednesday for an analysis of establishing electronic tolling on most Connecticut highways.

After a nearly hour-long debate, the 10-member commission voted 6-3, with one abstention, to approve the funding proposed by Gov. Dannel P. Malloy.

“I worry that some in modern-day Connecticut are subscribing to their own know-nothing philosophy,” said the governor, who said his successor and the 2019 legislature will need all available data about tolls to avert a looming transportation crisis. “They’re choosing to reject new information, to decide proactively to know less, to limit the scope of their options before even fully understanding what those options truly are.”

Without a major infusion of revenue, the transportation program will lack the resources to launch major highway projects planned for the coming years, Malloy said, including: repairs to the elevated section of Interstate 84 in Hartford, reconstruction of the “Mixmaster” junction of I-84 and Route 8 in Waterbury, and widening of major highways. 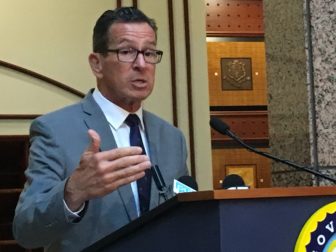 The Democratic governor, who is not seeking a third term this fall, charged his Republican critics with trying to stifle a crucial debate in a state election year.

He noted that in recent years the state has approved $11 million to fix a bridge in Derby, the home community of House Minority Leader Themis Klarides, and $2.5 million to improvements to an East Haven trolley museum in the district of Senate Republican Leader Len Fasano.

Department of Transportation Commissioner James Redeker estimated tolls could raise as much as $1 billion per year, with up to 40 percent coming from out-of-state motorists. Depending on the level of discounts provided to in-state residents, though, the state’s annual take could be closer to $600 million to $800 million. DOT officials also have estimated it would take four to five years to fully implement tolls if they were authorized.

Wednesday’s vote does not do that. It also provides funding for a study. Authorizing tolls would require an act of the legislature. 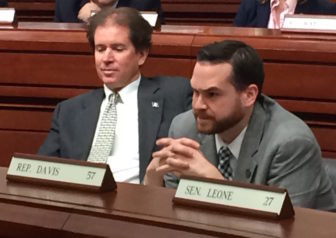 Davis and Frantz both noted the General Assembly opted not to authorize a tolls study this year. A bill to do so died on the House of Representatives’ calendar when the session ended on May 9.

“It failed pretty miserably, not to anybody’s great surprise,” Frantz said. “There will be a new governor to deal with this situation (next year.) Let’s wait. We don’t need it right now.”

“That’s what we have heard time and time again from the people of Connecticut: They don’t see a need or a desire to have a $10 million study,” Davis said.

Republican legislators have been unanimous in their opposition to tolls. The GOP has countered that Connecticut must better prioritize its transportation program and borrowing in general to free up more dollars for infrastructure improvements.

“People in Connecticut don’t want tolls,” Fasano said after the meeting. “They just don’t want to be pick-pocketed any more. We don’t need to do a toll study.”

Redeker told the bond commission that a Republican plan to finance transportation work without tolls also would leave Connecticut unable to do little more than highway and rail maintenance work. Fasano also said transportation officials did not offer that view when Republican legislators first briefed them on their plan in 2017.

Lembo was the lone Democrat to vote against financing for the tolls study.

“The State Bond Commission should not act as a replacement for legislative action,” the comptroller said afterward. “While the subject of electronic tolling — and infrastructure funding as a whole — is important to debate and discuss, I do not support financing this study through bonding without legislative directive. These decisions should be left to the next governor and legislature, and so I must vote against it.”

Lembo was the only constitutional officer on the bond commission seeking re-election. And while the comptroller did not raise the campaign as an issue, other Democrats questioned privately whether Malloy had hurt his own party by putting an unpopular issue before the public in an election year.

Democratic gubernatorial contender Ned Lamont issued a statement before the bond commission meeting even had ended, calling the study “a wasteful way to reinvent the wheel.” Lamont noted the state had commissioned a study in 2009, though Redeker said that analysis was more limited in scope than the latest one would be.

“Given our financial challenges, we need to instead be investing in solutions, not studies,” Lamont said. “We already know our roads are congested, our infrastructure improvements are underfunded, and Connecticut residents have paid the bill for far too long.”

Lamont said he would “utilize existing data to determine how much revenue Connecticut can generate from tolling the out-of-state trucks that are damaging our roads at taxpayer expense.”

“Information is a good thing, and that is the goal of this study,” said Bridgeport Mayor Joseph Ganim, who is challenging Lamont to be the Democratic gubernatorial candidate. “Tolls are controversial, but the electronic tolls of today are vastly different from traffic jam-causing toll gates of many years ago. Connecticut is the only state on the eastern seaboard not to have some kind of tolls, and we see that our special transportation fund is nearly insolvent, and our roads and bridges are falling apart and are not at the capacity we need. This is unacceptable and a drag on our cities and our economy.”

“Tolls are just another tax, and I have signed a no-tax pledge.”  said GOP gubernatorial candidate Bob Stefanowski. “Governor Malloy has blatantly ignored the will of the people. A study that will take months and months to complete is a gross misuse of taxpayer funds.”

Former hedge fund manager David Stemerman of Greenwich, one of five Republicans running for governor, said the tolls debate “highlights the failed leadership of Dan Malloy and the Democrats who have run the transportation trust fund and our state’s infrastructure into the ground.  It’s outrageous that their only answer to failed government leadership is to raise taxes on Connecticut commuters who are already over-burdened and fleeing the state in droves.”

And while the coalition sent about 100 people to the Legislative Office Building on Wednesday, organizer Don Shubert, president of the Connecticut Construction Industry Association, said the group was rallying for more transportation projects — but had no position on the $10 million tolls study.

“They don’t know who the next governor is,” Malloy said about the coalition’s neutral position. “I’m sure he (Shubert) is reluctant to stick his neck out — beyond the fact that he clearly wants more money spent on transportation.”

Fonfara, who is seeking re-election but represents one of the safest districts for Democrats in Connecticut, said “too often we make political fodder out of issues that get a quick response from the public,” such as tolls.

Fonfara, who has said Connecticut cannot rebuild an aging, overcrowded transportation system without a new revenue source, added that his vote in favor of the study “is not a tough vote for me.”

But while the questions of tolls sparked a fierce political debate, administration officials also said most of the $10 million might never be spent on a study.

Both the governor and Redeker estimated it would take roughly nine months to solicit proposals for a transportation consultant, and to make a contract award. That would happen, tentatively, in April 2019, roughly three months after Malloy had left office.

That means the governor’s successor easily could block the study simply by directing the DOT not to enter into a contract.

In that event, Malloy said, only a small portion of the $10 million would have been spent to advertise and invite interested consultants to bid on the project.

State Treasurer Denise L. Nappier, who serves on the bond commission, abstained from Wednesday’s vote , saying she would have supported funding for a broader study.

“I do … question whether tolls ought to be considered in isolation when there are a myriad of other financing options” to pay for transportation improvements, she said. These include fuel tax increases as well as public-private partnerships.