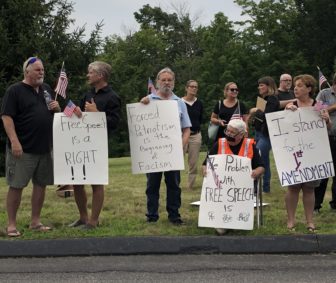 The quaint town of Haddam was transformed Monday evening into the front line of a political battle over free speech as protesters packed a routine Board of Selectmen meeting to register their opinions about the selectwoman who garnered national attention by kneeling during the Pledge of Allegiance.

Since quietly protesting the Trump administration during the July 16 Board of Selectman’s meeting by taking a knee during the pledge, Melissa Schlag has awakened an outcry from both residents and Republican candidates running for statewide offices.

In the garage of the town’s volunteer fire station Monday night, where Schlag joined her fellow selectmen and an audience of about 100 residents, the politician knelt once again during the reciting of the Pledge of Allegiance while people in the audience stared her down or yelled the words to the oath in defiance.

One veteran denounced Schlag’s actions, awakening a standing ovation from the rowdy audience spilling out the doors of the room.

“One day… I lost 18 of [my platoon] in a suicide bombing. What you did was urinate all over their graves,” Pablo Arroy yelled at Schlag, who sat quietly at the selectmens’ table facing the crowd.

Not all veterans were critical of Schlag, however. A Vietnam War veteran nearly lost his breath, necessitating a chair and water, after delivering a passionate “screw you”-ridden speech to those criticizing Schlag. He was met by a ripple of “boo’s” and “get off the stage.”

The veterans were just two of the many citizens who dedicated their Monday evening to either denounce the selectwoman and her silent protest or defend her right to kneel.

Moments before the meeting, a cluster of citizens decked out in black attire lined the doors of the fire station. Armed with signs advocating the First Amendment, the group remained planted on the grass, many wearing  black tape over their mouths, for nearly two hours.

“I knew that when the selectman took a knee, it didn’t reflect the views of the people in this town,” Linares said. “I don’t want to see others take a knee during the Pledge of Allegiance, and this was our way of putting a stop to it.”

Schlag waited until the end of the public comment portion of the meeting to make a statement.

“We can’t wrap our sins in a flag and expect it to be okay,” she said, as people in the crowd turned their backs as she spoke.

The clashing demonstrations were just two of the events organized in response to Schlag’s actions. Following a week and a half of backlash, a group of Haddam residents coordinated a pro-flag rally last Friday, lining the streets of the town with more than 1,000 American flags.

Her small protest before no more than two dozen residents lasted a total of about 10 seconds, but it has been echoing in state politics ever since.

“What has happened is completely disrespectful,” said Linares, who is facing an Aug. 14 primary for the GOP nomination for state treasurer. Linares was the first state politician to denounce Schlag.

Linares issued a July 23 press release, calling on Schlag to “immediately apologize to Haddam residents who are offended by her lack of respect.” He followed up later that same day with a Twitter video, this time escalating his criticism to a full fledged call to action, urging Schlag to step down as selectwoman.

But the fall-out didn’t end there.

By July 25, Herbst, who is in a 5-way primary for the GOP nomination, was denouncing Schlag and calling for her resignation from a much more visible perch — the set of FOX & Friends, a daily morning conservative news/talk program on Fox News Channel.

“She needs to resign immediately. One of the things our flag stand for, it stands for our freedom. It stands for our democracy. It stands for the fundamental ideal that we can have differences of opinion. But we all stand in respect of our flag. Many people, including my 93-year-old grandfather, was a veteran, fought in defense of the very liberties that flag resembles,” Herbst said during the show.

After hearing of one another’s intersecting efforts, Herbst and Linares joined forces to organize a protest denouncing Schlag outside the town hall building Monday.

“As the Senator from this district, I wanted to put an end to it,” Linares said. “ I don’t want others in this town and in my district think it’s okay to take a knee.”

Both the demonstrations persisted for about two hours, until Schlag entered the Fire House for the first board meeting since the July 16 event. She was joined by First Selectman Liz Milardo and Second Selectman Larry Maggi, both of whom publicly denounced her protest.

In the wake of her kneeling, Schlag said she had received an outpouring of responses that range from support to threats. She called the statements of the Republican politicians “disgusting.”

“Any candidate that tells a citizen of the U.S. that they don’t have a voice should resign and doesn’t belong in our government,” she said. “Through their political motivation, they are trying to silence the people by taking away our First Amendment rights for political gain.”

She added that her protest was not an act of disrespect for the flag but rather “a silent cry for our country to be better.”

“The intention of my silent protest was the bring the injustices of our country to the forefront,” she said. “The loud wave of ugly attacks on our basic rights set forth under the constitution shows just how much we have to lose.”

As long as Donald Trump is president of the United States, Schlag says she will continue to kneel.

On Monday evening, she did just that, this time before a much more adrenalized audience.