Secretary of the State gearing up for smooth, clean, secure primaries 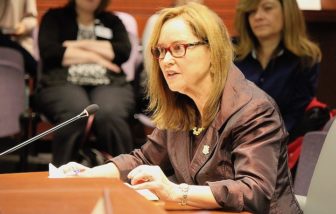 Secretary of the State Denise Merrill speaking about voting issues at a recent meeting in New Haven.

As scandals involving Russian hackers meddling in United States elections usher in an era of voting-phobia nationwide, Connecticut is gearing up for a clean primary election next Tuesday.

Secretary of the State Denise Merrill said she is devoting much of her office’s resources to enhancing security in the state’s voting registry systems to assure they are not compromised or vulnerable to hacking.

“People can feel very confident that, at least in Connecticut, we are watching everything and we are doing everything we can,” Merrill said.

Her efforts to ensure a smooth election coincide with an influx of eligible voters in the state, as voting registration numbers reach unprecedented heights leading up to Tuesday’s primary.

The numbers may continue to soar within the next few days considering unregistered or unaffiliated voters who would like to vote in this primary have until this Thursday, August 9, to register for a party if they are doing so by mail or through the DMV. As for in-person registration at local voting districts, residents can register as late as next Monday before noon. Voters who would like to switch parties to vote in this primary would have had to do so a few months ago — 90 days prior to the election date.

Earlier this month, Merrill attended a meeting with the Director of Homeland Security in Washington where she found out that Russian hackers successfully accessed voting rolls in Illinois in 2016. They attempted to hack the databases of 21 states in total, including Connecticut, but their attempts were vetted in all but Illinois.

The Secretary of the State’s office, Merrill says, was granted federal money last week to send security consultants to voting booths across the state. The consultants will advise the booth’s workers on security measures and add two-factor identification to the routers they use to maintain the voting rolls.

“Relative to most federal grant making, this [grant] was remarkably quick,” Merrill said. “Everybody realizes we have very little time before elections.”

The Secretary will be sending out a fleet of consultants to the 169 towns and municipalities in the coming week. However, Merrill is confident that Connecticut voting systems are not vulnerable to hacking.

The database that the Russians tried to tamper with was the online voting registry system, information that is available to the public, Merrill said. Their attempts were thwarted, and should there be any more efforts to change that list in future elections, Merrill said the changes would be easy to detect and vet. Likewise, it would be near impossible for anyone to cyber-hack the voting counts, given that Connecticut tallies votes the old fashion way: by hand.

“At end of the night, [we] get a piece of paper that gives results; it’s all done by hand. We type in the numbers into our reporting system,” Merrill said.  “We have a lot of systems in place that are pretty protective of our systems in Connecticut.”

As for national sentiment that reveals an increasing distrust in voting, Merrill believes the “campaign of disinformation” that frames cyber-hacking as an immediate threat to elections is the most problematic to voting, not the hacking itself.

“The biggest threat to democracy is when people lose faith in the accuracy and fairness of elections,” she said.  “We’ve been doing elections for many years, and there are many checks and balances in place.”

As the state government prepares for tampering-free elections, Connecticut’s voter registration numbers are on the rise.

“There is a tremendous increase in the number of voters — the largest number we have seen in my time,” said Secretary of State Denise Merrill.

With 275,114 new  registered voters from the 2016 Presidential Elections until June, Merrill attributes much of the momentum to younger voters. Over the last decade, she says the number of voters aged 18 to 24 has nearly doubled. The reason being, she believes, is that registration has become easier and more convenient for Connecticut residents. Along with online registration options, the state’s “motor law” enables individuals to register at the Department of Motor Vehicles.

“It’s very telling that a huge majority of registrations have come in through the DMV,” Merrill said.

But while the state continues to welcome thousands of new voter registrations, statewide trends have remained wholly consistent. The state’s 81,908 new registered Democratic voters since 2016 and 43,390 new registered Republican voters follows a typical two-Democrats-to-one-Republican ratio in the state. The ratio puts Connecticut in the national minority, with only 19 states nationwide showing more active Democrat voters, or individuals who have voted in the last two federal elections, than active Republican voters.

Similarly, unaffiliated voters, who are not allowed to vote in the primary elections, continue to account for the majority of active voters in the state, making up 859,469 of the state’s total 2,104,102 voters. And although interest in national politics surged following the 2016 presidential elections, Merrill is not sure this interest will apply to local elections as well.

“The question is whether [the registered voters] will actually come out to vote,” she said. “I do think we will see an increase in the general elections, but primaries are tough. They typically have a very low turnout.”

“I am really thrilled with the increase in voter registration; but I won’t be happy until  every registered voter is out there to vote.”

Whether or not they want one, Connecticut Republicans will have a presidential primary in April.