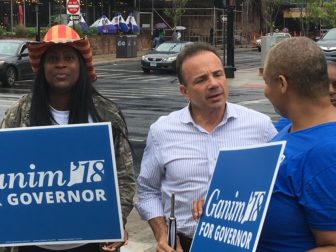 Democratic gubernatorial rivals Ned Lamont and Joe Ganim spent part of their final Saturday before Tuesday’s primary campaigning in Hartford’s rainy Bushnell Park, reaching out to voters — and taking shots at one another.

Taking part in the Greater Hartford West Indian Independence Celebration, the candidates delivered a message that was one part critique of the opposition, one part optimistic vision for  Connecticut’s future.

“My opponent has no experience,” Ganim, the mayor of Bridgeport, said of Lamont, a wealthy Greenwich businessman who lost a 2006 bid for U.S. Senate and a 2010 campaign for the Democratic gubernatorial nomination. “I don’t think he really connects with people. He seems so out of touch.”

Lamont’s lack of experience has shown as he’s “unraveled in the debates,” said Ganim, who also emphasized Lamont’s reluctance to pledge his support for Ganim, should the Bridgeport mayor win the primary. “I think for insiders, for Democrats — you know, prime Democrats — there’s a disenchantment with Ned as a pre-ordained party nominee, especially when he said “probably not.”

But Lamont, who overwhelmingly won the Democratic state convention endorsement, said, “Joe always paints himself as a victim, and I think he’s victimized a lot of people over the years.”

Ganim, who was convicted on 16 felony counts in 2003 during his first stint as mayor, served seven years in prison for his leadership role in a kickback scheme. 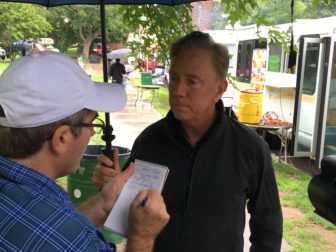 Hartford resident David Perry, an auto parts delivery man, said he hadn’t decided who to support Tuesday.  But he told Lamont that whoever has a real plan to make health insurance more affordable has a big edge.

“My premiums are sky-high,” said Perry, who is married with five children. “Small raises, I can deal with that,” he said. “I know how to make it work. But health insurance? I’m asthmatic. My kids are asthmatic. We need help.”

Lamont and Ganim both insisted they are focused on rebuilding Connecticut’s economy while Republican candidates simply are making unbelievable promises of major state tax cuts.

“Jobs is a huge issue,” Ganim said. “People really do want someone who’s a fighter, someone who’s not afraid to take on and fix Connecticut’s fiscal problems. I think they’re saying I’m the guy who can do it.”

Both Democrats said they were concerned about turnout on Tuesday, and said healthy voter participation was a key to victory.

“I want people to pay attention,” Lamont said, adding that Democratic complacency contributed to the election of Donald Trump two years ago. “I am going flat out, nonstop, now through Tuesday. I’m telling people this is a big decision for our state going forward.”

Lamont also had campaign stops Saturday in New Haven, and was scheduled Sunday to visit Stamford, Newtown and Bridgeport.

Ganim, who divided his Saturday between North Haven, Hartford and New Haven, said he wasn’t worried, but “concerned” that in mid-August many Democrats still haven’t focused on the primary.

“If people recognize everyone has a stake in this primary, it’s going to determine, very likely, the future of Connecticut,” he said. “But there’s a lot of momentum, and that’s very encouraging, whether it’s in the cities or the towns.”