Herbst tests risk and reward of alliance with social conservatives 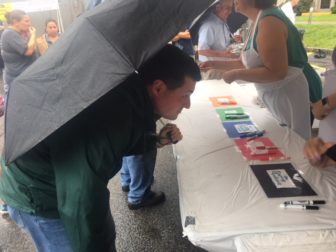 Timothy Herbst campaigning in the rain at a festival outside Holy Rosary Church in Ansonia. He picked up a vote from the pastor.

With carefully calibrated appeals to gun owners and social conservatives, Timothy Herbst is looking for the sweet spot in Connecticut politics on Tuesday: How far to the right can a gubernatorial candidate go to distinguish himself in a crowded Republican primary, yet remain viable in November?

It’s not a new game, nor limited to Republicans. The reality of modern, hyper-polarized politics pushes candidates to the edges in primaries, hoping they still can see the middle of the road in the general election. For Republicans this year, it means, among other things, pledging fealty to President Trump and the Second Amendment.

All five Republican candidates — Herbst, Danbury Mayor Mark Boughton and businessmen Steve Obsitnik, Bob Stefanowski and David Stemerman — say they would welcome a campaign visit by Trump and promise to oppose further gun controls. But most of them balk at even talking about social issues, saying voters are rightly focused on restoring the state’s fiscal health.

But Herbst is going where statewide Republican candidates rarely venture. He has embraced the endorsement of the Family Institute of Connecticut’s political arm. The small, modestly funded organization is known for its defense of religious liberty and opposition to abortion, same-sex marriage and assisted suicide.

As the group’s executive director, Peter Wolfgang, acknowledges, it is a complicated relationship. Herbst is promising respect and understanding, but few specific actions — other than a call for Connecticut to join the majority of states that require some form of parental consent or notification for a minor to get an abortion.

And Herbst artfully dodges when asked the yes-or-no abortion question: If an increasingly conservative U.S. Supreme Court overturns Roe v. Wade and returns the issue to the states, would he sign a bill repealing Connecticut’s codification of Roe in state law?

Herbst says he sees overturning Roe as unlikely, and even if the court did, Connecticut is solidly pro-choice state. “I don’t think it would ever get to my desk — ever if I were governor,” he said of a repeal bill. “It would never get to my desk in eight years.”

Wolfgang said he does not disagree with Herbst’s assessment, nor is he troubled by his answer.

The featured speakers at the rally included three conservative House Republicans, plus Wolfgang and Scott Wilson, a co-founder of the Connecticut Citizens Defense League, a gun owners group with 31,000 members. Herbst said a majority of Republicans canvassed or polled by his campaign identify guns rights as an important issue.

“When you have constituencies that represent that many people in a multi-person primary, that has a big impact,” Herbst said.

Wolfgang, who says his organization’s issues resonate in Connecticut with far more than its 3,000 active members, has long pined for A Great Right Hope, a candidate willing to test his thesis that Republicans can safely engage the state’s marginalized cultural conservatives, if on a limited basis, without losing social moderates.

If Herbst succeeds, Wolfgang said, it might encourage Republicans to “have more of a spine in Connecticut when our issues come up.”

Tom Foley, the Republican who lost to Gov. Dannel P. Malloy by a scant 4,604 votes in 2010, never returned Wolfgang’s issue questionnaire that year. In Foley’s second race in 2014, the Family Institute endorsed him, primarily over his opposition to assisted suicide — and the fact he wasn’t Malloy, a strong advocate of gay and transgender rights, including marriage equality.

“We have a low bar here,” Wolfgang said.

Nationally, the Family Institute is in step with the Republican Party. Since Republicans nominated Ronald Reagan in 1980, the party has included support for a Human Life Amendment protecting the unborn as a plank in every platform. In 2016, it went further, calling for defunding Planned Parenthood, reversing President Obama’s transgender protections, opposing assisted suicide and limiting marriage to opposite-sex couples.

Not so for Republican candidates in Connecticut. Wolfgang said, “They usually hide under their bed when these issues come up.”

Herbst, 37, is a lawyer who occasionally engaged in the cultural wars as first selectman of Trumbull. A controversial mural putting Mother Theresa in the same scene with birth-control pioneer Margaret Sanger came off a library’s wall during his tenure, though his stated reason was concerns over legal liability, not a response to offended Catholics.

From the GOP’s first debate in December, Herbst has mixed get-tough-on-crime and social conservatism with an insistence, along with the rest of the field, that Connecticut’s weak economy, project budget shortfalls and massive unfunded pension liabilities would be his priorities.

Without anyone asking about capital punishment, Herbst said during the first debate he would push for its reinstatement.  At a time when crime is at a 40-year low, Herbst is promising a larger state police force and an end to prison good-time credits, a major departure from conventional policies in nearly every U.S. prison system.

But it was his early and outspoken opposition to the nomination of Andrew J. McDonald as chief justice of the state Supreme Court that Wolfgang says put Herbst “on the radar” of the Family Institute.

Opposition to McDonald’s confirmation quickly became a political Rorschach test, subject to varying interpretation. Some Democrats heard a dog whistle — McDonald would have been the first openly gay jurist to lead any state’s highest court. But he also had long infuriated cultural conservatives as the liberal state Senate co-chair of the Judiciary Committee.

His confirmation was rejected with every Republican in the Senate and all but one in House voting against him, with many saying they objected to his role as an associate justice striking down the last vestiges of capital punishment. McDonald had been Malloy’s legal counsel when the governor signed a law repealing the death penalty for future crimes, but not those already on death row.

If he wins on Tuesday, Herbst can expect Democrats to use the Family Institute endorsement against him. In 2014, the state Democratic Party gleefully publicized its backing of Foley: ”When an anti-equality, anti-choice, extremist group wants to turn back the clock with an 18th century agenda, who do they turn to? Tom Foley.”

For now, he said, it is worth votes, as he discovered Saturday. Campaigning in the rain at the Italian Festival at Holy Rosary Church in Ansonia, he introduced himself to the pastor of the Catholic parish, Father Jeffrey Gubbiotti, who asked him one question: What is your position on abortion?

Herbst told him he was endorsed by the Family Institute and favored a parental consent law.

Gubbiotti, a registered Republican, said he would vote for Herbst.

When told that Herbst favors reinstating the death penalty, something Pope Francis recently declared to be unacceptable in all cases, the pastor said that would not change his mind, calling abortion a greater threat to human life than capital punishment. “How many babies are never born because of abortion vs. how many people die from the death penalty?”