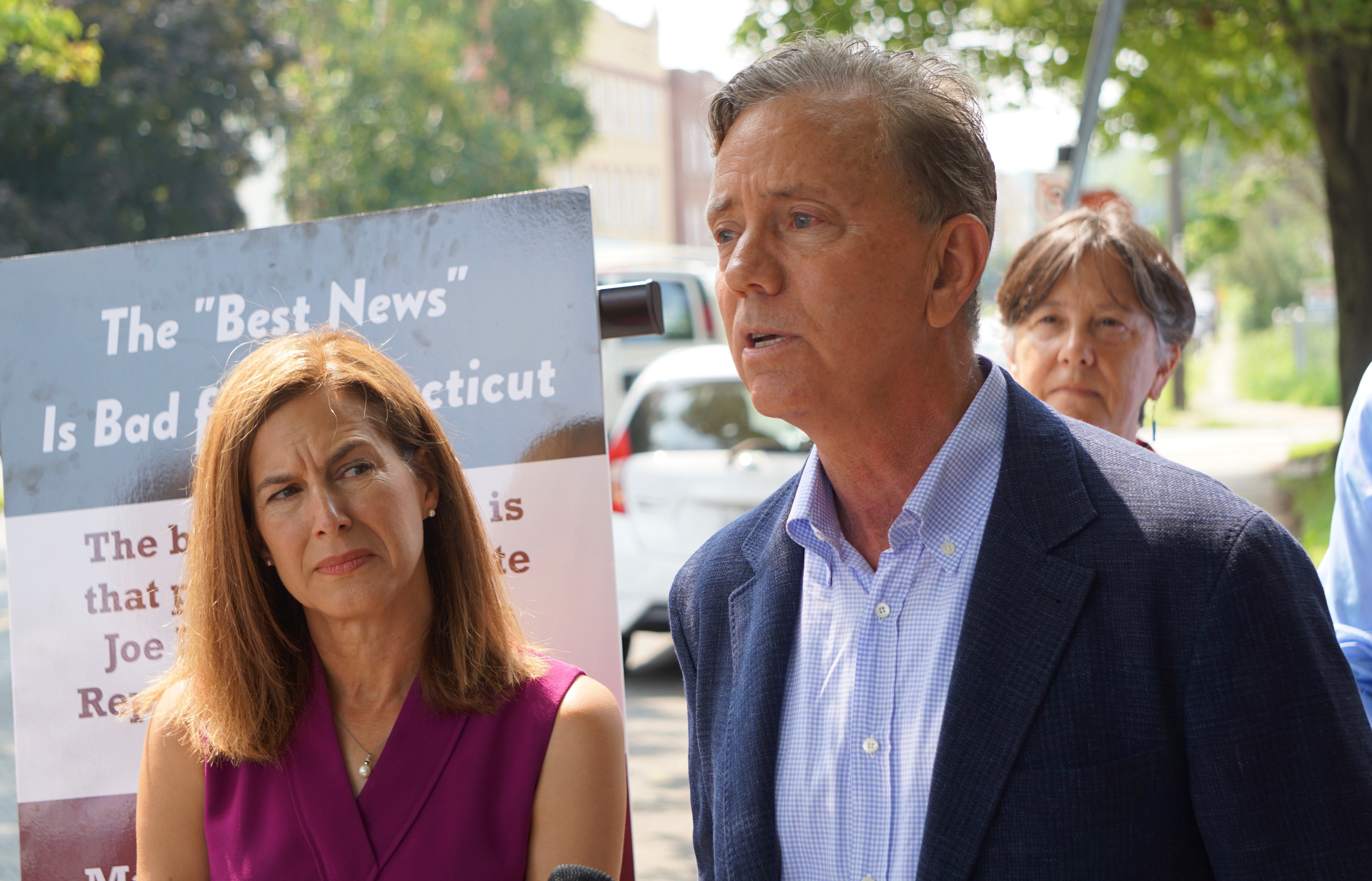 Standing outside the Hartford Gay & Lesbian Health Collective, the Democratic nominees for governor and lieutenant governor, Ned Lamont and Susan Bysiewicz, tried Thursday to draw Republicans into a debate over abortion, gay marriage, Donald J. Trump and the Family Institute of Connecticut.

The invitation was declined.

The press conference was the Democrats’ second effort in as many days to tie Bob Stefanowski, the winner of Tuesday’s Republican gubernatorial primary, to a polarizing president who has been an organizing gift to Democrats desperate to stop a resurgent Republican Party from winning control of the State Capitol.

On Thursday, Lamont, Bysiewicz, and two gay elected officials — Comptroller Kevin P. Lembo and state Rep. Jeffrey A. Currey of East Hartford — also made an issue of the GOP nomination of state Sen. Joe Markley of Southington for lieutenant governor. He is endorsed by the culturally conservative Family Institute.

The Family Institute shares an agenda embraced by the Republican National Committee, including opposition to abortion, same-sex marriage and accommodations for transgender individuals, but its influence in Connecticut has been limited. Its choice for governor, Timothy Herbst, finished fourth Tuesday in the five-way Connecticut primary.

Stefanowski, who was taking a break from campaigning Thursday to take his middle daughter to college, generally has refused to be drawn into debates over social issues. At the final debate before the primary, he said, “This election needs to be laser-focused on the economy.”

But he has said he would support one restriction on abortion: requiring parental consent or notification before a minor could get an abortion.

On Thursday, his campaign manager, Patrick Trueman, said the Democrats are trying to distract voters from the failed stewardship of the economy by Gov. Dannel P. Malloy. He repeated “Dan Malloy” three times, an incantation that Republicans believe can neutralize Trump as an issue.

Lamont agreed economy and the budget were central issues.

“I’m not running away from what’s been a bipartisan fiscal train wreck going back 30 years in this state, and I’ve hit that hard,” Lamont said. “But that doesn’t mean we just give up on the social agenda, we give up on the rights of all of our people, the rights of gays and lesbians to determine their own life, we give up on the fact gay marriage is important and Connecticut was a leader here. That doesn’t mean we don’t challenge Joe Markley and the Family Institute on issues that are so important.”

“They’ve been running off to the corner saying it doesn’t matter, saying the eonomy is the most important thing,” Bysiewicz said. “We agree that the economy is important, but we also agree that people’s stands are important, and we challenge them today to say what their’s is.”

Peter Wolfgang, the executive director of the Family Institute, said he was flattered by the attention to his group and their issues: “I’m sitting on the beach, and they are doing my job for me.”

Wolfgang called the the victory of Markley “a consolation prize” and said that Stefanowski’s endorsement of parental notification was encouraging, but observed that neither man is a cultural warrior ready to take on his group’s issues. “Even for Joe Markley, social issues are secondary” to the economy, he said.

“The fact that Ned Lamont and Democrats would make an issue of it speaks to their own extremism and desperation in this race,” he said. Connecticut is one of the few states that has no requirement for parental involvement in the ability of a minor to get an abortion, he added.

One of Markley’s competitors for the nomination, Darien First Selectman Jayme Stevenson, had warned during the campaign that Markley’s social conservatism would be a distraction and criticized Markley for being the only senator to vote two years ago against a law establishing an affirmative-consent threshold in cases of sexual assault on all college and university campuses in Connecticut.

Markley, who could not be reached Thursday, said then, “I’ve never seen a policy that gets government more in the bedroom.”

“I’ve got to say, reading about the Family Institute, what makes you particularly pro-family? All I can see is you’re telling people who they can love and who they can’t love, who can get married and who can’t get married,” Lamont said. “Does that make you pro-family? Something I don’t understand. Those aren’t the values I grew up with.”