Malloy keeps up the pressure for transportation rebuild — and tolls 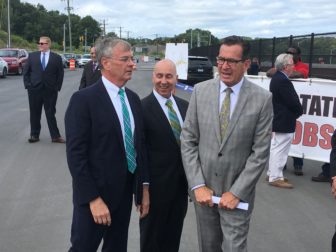 Undaunted by a lack of interest from state legislators and most gubernatorial candidates, Gov. Dannel P. Malloy continues to try to keep Connecticut focused on rebuilding its aging, overcrowded transportation system.

The governor, who is not seeking re-election, used Monday’s announcement regarding one highway project in Waterbury to urge residents to demand more investment in transportation once he’s left office.

“There’s a lot of work to be done in Connecticut,” the governor said from a site overlooking the $330 million widening of a 2.7-mile section of Interstate 84 between Washington Street and Pierpont Road in the Brass City.

That work, Malloy announced, is on pace to wrap one year ahead of schedule. A third lane opened to eastbound traffic this week and a third westbound lane will open in September.

But that’s just the start of a long list of major projects that the Department of Transportation — under the Malloy administration — has been gearing up to begin in the next few years.

Replacing the elevated section of I-84 in Hartford, commonly known as the viaduct.

Renovating the “Mixmaster” junction of I-84 and Route 8 in Waterbury.

And widening Interstate 95 in southwestern Connecticut.

Malloy warned Wall Street credit rating agencies, Connecticut businesses, state legislators — and anyone else who would listen — last winter that absent more funding, these projects would fall into limbo and the state’s transportation program was headed for dramatic contraction over the next five years.

Legislators approved a fiscal patch this past spring, transferring an extra $29 million in sales tax receipts into the transportation fund this fiscal year and another $120 million in 2019-20.

But that is not expected to stabilize transportation funding beyond 2022 or 2023.

Malloy, who wanted legislators to finance a 30-year rebuild of transportation infrastructure, got State Bond Commission approval earlier this summer for a $10 million analysis of how to implement electronic tolling on Connecticut highways.

But it remains uncertain whether that analysis will be performed.

The DOT likely won’t be ready to award a consulting contract for that analysis until March — two months after Malloy leaves office.

Only independent candidate Oz Griebel, who led the former State Transportation Strategy Board, has said he would consider tolls, and would likely begin with a pilot tolling program in the next term.

In addition, legislators have balked each of the last two years at proposed bills that would have studied or established electronic tolling.

“The key to unlocking the value … of Connecticut is a transportation system that is competitive with the states that we compete with,” Malloy said Monday, adding that Connecticut won’t win back jobs from rival neighbor states without a major transportation investment. “Right now we have not gotten our share of job growth … in part because people didn’t believe Connecticut would do what it would take to turn its transportation program around.”

Stefanowski “hasn’t proposed how he is going to pay for transportation and he hasn’t told people in Fairfield County they’re going to have to suffer the transportation system they currently have.”

Malloy went a little easier on Lamont, a fellow Democrat, but wasn’t ready to endorse a tolling plan limited only to trucks.

Don Shubert, president of the Connecticut Construction Industry Association and one of the founders of Move CT Forward — a coalition of construction businesses, trades and other transportation advocates — predicted the issue of tolls won’t go away no matter who wins in November.

“I think its very obvious that Connecticut needs a long-term, user-based funding stream for transportation,” he said. “How the candidates figure that out remains to be seen.”