Ned & Bob’s first week: Lots of Ned, not much of Bob

It was all smiles over the weekend as Ned Lamont, left, and Sen. Richard Blumenthal talked with Joe Ganim.

Ned Lamont aired the first general-election commercial the day after his Democratic primary win, staged his first public event the same morning, and has been campaigning daily ever since, backed by a unified Democratic ticket.

Meanwhile, his Republican opponent, Bob Stefanowski, has been off the air and off the trail since winning his primary last Tuesday, though the Republican Governors Association already is campaigning on his behalf.

The contrast is a reflection of two things: Lamont, 64, has been the presumptive nominee for months, his focus on November; Stefanowski, 56, a political neophyte with no ties to the Republican establishment, is the survivor of a five-way primary, whose campaign could not afford to look too far ahead.

So, while Lamont campaigns, Stefanowski retools, staffing up for the general election and working to win acceptance as the new face of a Grand Old Party.

“I think the first order of business for Bob is to get out and get on board all the people who didn’t vote for him. That’s always the toughest thing after a primary,” said Liz Kurantowicz, a Republican operative. “That’s the first job of leadership. This is his first test. I’m certain he will pass, but it’s the first thing he has to do.”

Oddly enough, one of the few people in Connecticut politics who knows well the challenge of getting the establishment to accept an insurgent is his Democratic opponent, Lamont.

In 2006, Lamont, then an unknown 52-year-old businessman, won a primary for U.S. Senate on the strength of a single issue that resonated with the Democratic base: Opposition to Sen. Joseph I. Lieberman’s enthusiastic support of George W. Bush’s decision to invade Iraq in 2003. Lamont never quite figured out how to pivot, broaden his message, and unite the party behind him.

Not so this year. U.S. Sen. Chris Murphy and other Democrats helped clear the field  of every one of Lamont’s Democratic rivals save one: Bridgeport Mayor Joseph P. Ganim, a media curiosity whose conviction for public corruption shrank his appeal. Ganim lost in every community but Bridgeport.

Ganim was a face in the crowd Saturday at a modest unity rally in Hartford where Lamont took aim at the foundation on which Stefanowski has built his campaign: A promise to make Connecticut a laboratory for supply-side economics — radically shrinking government and slashing income and business taxes to spark economic growth.

“I gotta tell you something,” Lamont told the crowd, his voice rising. “I look at that Republican tax plan. I look at Stefanowski’s tax plan. It is nuts. It is a fantasy. It is silly, to quote a Republican leader.”

Stefanowski proposes to eliminate the state income tax — the source of half the state’s revenue — in eight years, a pitch outlined in a paper produced for his campaign by Arthur Laffer, the supply-side economist. Laffer produced a rationale for eliminating the tax, but not an implementation plan.

Democrats are trying to quickly fill in the blanks.

Even with radical spending cuts, they say, eliminating the income tax would require a shift to more regressive taxes, namely the sales and property taxes. Lamont also is making the case that if Stefanowski slashes state spending, he would also have to shrink state aid to municipalities.

Connecticut currently spends 10 percent of its annual budget — about $2 billion annually — on just on its education cost-sharing program.

“Let me tell you what that means. Luke Bronin knows what that means,” Lamont said at the rally Saturday, nodding to Hartford’s mayor. “Mayor Ganim knows what it means. To cut, to eliminate the income tax for the highest-paid people in our state right now, you know that would mean jacking up property taxes, making it so tough in Hartford, in Bridgeport,  all our towns and cities going forward.”

The same message is going out on Facebook ads that had been seen at least 200,000 times as of Sunday night. Stefanowski’s only active Facebook ad is a fundraising appeal. 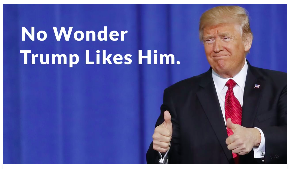 …and the president’s endorsement. 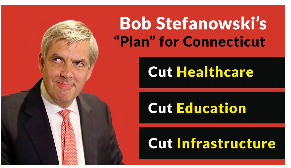 Lamont hits Stefanowski on his plan…

Lamont and the Democrats are telling voters that if Stefanowski’s priority is a supply-side experiment in cutting taxes to generate growth — an experiment that failed recently in Kansas — it will come at a cost to public education.

“How can you gut education in this state? Our calling card has always been the best educated, most productive workforce in the world,” Lamont said.

Chris LaCivita, the senior adviser to Stefanowski, said his candidate has no intention of harming education or shifting the tax burden to the property tax.

The paper Laffer produced for Stefanowski warns against education cuts. “Ending on a positive note, Connecticut has excellent schools,” Laffer wrote. “It’s important that the state continues this tradition if it wants to turn itself around. Educational outcomes, year in year out, are in the top 5 in the nation.”

Lamont’s first post-primary ad borrows, at least thematically, from the Republican playbook, promising to simultaneously invest in education and cut property taxes — something that would require more state revenue or, at the very least, rearranging priorities. Like Stefanowski, Lamont does not say how he would he accomplish that goal.

LaCivita said the commercial should be reassuring to Republicans.

“If Republicans are fighting with Democrats on the issue of lower taxes, we’re fighting on our turf, not theirs,” LaCivita said. ”Ned Lamont’s first ad post-election, he’s talking about cutting taxes. I mean, that’s laughable.”

The new Lamont ad acknowledges Connecticut’s inability to match economic growth elsewhere in the U.S. while reinforcing a Democratic talking point: Both parties are to blame for Connecticut’s fiscal state, not just Gov. Dannel P. Malloy, the unpopular Democrat exiting after eight years. His two Republican predecessors held the office for 16 years, sharing power with a Democratic legislature.

“After a generation of failed political leadership, Republican and Democratic governors, too many of our kids and businesses are fleeing the state,” Lamont says in the ad. “I’m going to change that.”

Stefanowski beat the party-endorsed candidate, Danbury Mayor Mark Boughton, by an impressive eight-percentage points, 29 percent to 21 percent. But that still leaves 71 percent of the GOP electorate behind someone else, at least on primary day.

Unlike Stefanowski, every one of the other winners of last week’s statewide primaries was party endorsed.

Lamont planned to campaign Monday with U.S. Sen. Richard Blumenthal. They are to tour a plastics plant in Middlefield, a backdrop for Lamont to talk about his “vision to improve the business climate in Connecticut, spur job creation and improve skills training to be competitive for the jobs of today and tomorrow.”

Last week, Lamont smiled when asked about his pace compared to the week after his victory in the 2006 primary. “It’s really important that people focus on what’s at stake in this race in November,” Lamont said, “so yeah, I hit the ground running.”

LaCivita said he will have company, soon enough.

“The general-election campaign began at 9 o’clock on Tuesday night,” Lamont said. “The RGA is coming in with a slash and burn anti-Ned negative ad already.”