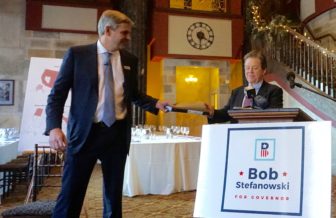 Connecticut Democrats stepped up their campaign Tuesday to fill in the gaps of Republican gubernatorial nominee Bob Stefanowski’s promise to phase out the state income tax over eight years — arguing it would come at a steep cost to local schools, municipalities and property taxpayers.

With a long opinion piece by the Democratic nominee, Ned Lamont, and a series of statements from a public-school teacher in Manchester, a legislative leader, and the mayors of Hartford, East Hartford and South Windsor, the Democrats said the only way to slash the income tax would be a massive shift to local property taxes.

Lamont says Stefanowski’s plan “represents an easy answer, rather than a hard choice.”

“And that’s because my opponent isn’t telling you that your property taxes will skyrocket,” he wrote. “Or that the sales tax will have to be jacked up. He isn’t telling teachers they will be fired and parents that school funding will be gutted. He isn’t telling veterans or the elderly that their tax breaks will go away, or admitting that our already broken infrastructure will crumble as a result.”

Lamont posted his opinion piece on Medium, a blogging platform launched in 2012 by two founders of Twitter covering a wide range of topics. Posts that gain readership attention are displayed more prominently.

Stefanowski, who was meeting Tuesday afternoon with Republican State Chairman J.R. Romano and candidates on the GOP ticket for the first time since winning the primary, did not immediately respond to Lamont’s post. But he has staunchly defended his assertion that the income tax — which collects about $9.7 billion per year and pays for 51 percent of the General Fund — can be eliminated over the next eight fiscal years.

“Anyone who stands up here today and says you can’t do it isn’t a true leader,” Stefanowski declared two weeks ago during a debate at Fairfield University. “I will rip costs out of the state budget like you have never seen in your life.”

And his senior adviser, Chris LaCivita, said Sunday the Stefanowski campaign was thrilled to see Democrats focusing on their tax plan: “If Republicans are fighting with Democrats on the issue of lower taxes, we’re fighting on our turf, not theirs.”

Complicating any effort to “rip costs out” are surging retirement benefit and other debt costs — largely fixed by contract — that are projected to dominate state budgets well into the 2030s.

Still, Stefanowski insists his plan will stimulate the Connecticut economy like never before, and he frequently notes it was endorsed by the supply-side economist Arthur Laffer, who gained prominence in the 1980s as an advisor to President Ronald Reagan.

Lamont challenged that assertion by pointing to several steps Kansas took in 2012, including repeal of income taxes for “pass-through entities”– smaller businesses that don’t pay a corporate income tax — and a major reduction in individual income tax rates. 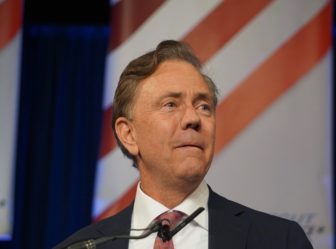 Ned Lamont accepting the Democratic nomination in May.

According to nonpartisan analysts for the Kansas legislature, tax revenues fell by nearly 8 percent per year from 2013 through 2016, leading to cutbacks in transportation work and social services for the poor, along with shorter school calendars.

In May 2017, Kansas lawmakers rescinded the tax cuts.

“It became a mess, largely because, to use George H.W Bush’s words, the tax ideas it was premised on were ‘voodoo economics,’ ” Lamont wrote. “Kansas has become the national example of what not to do.”

In December, when he joined Stefanowski at a press conference, Laffer says his supply-side approach was sound, but Kansas failed to make spending cuts sufficient to offset revenue losses.

Lamont has said he would hope to keep the income tax stable while increasing aid to cities and towns to reduce property taxes. But, like Stefanowski, Lamont has not explained how he could make the numbers work. Boosting state aid to municipalities seems unlikely, given that the state faces a projected shortfall next year of $2 billion.

Democrats said Tuesday that Connecticut would follow a path similar to Kansas’ under a Stefanowski administration.

“This plan will understaff and under resource educational institutions in Connecticut from UConn to local elementary schools, prompting teacher layoffs and ballooning class sizes,” wrote Angie Parkinson, a public school teacher in Connecticut.

State Senate Majority Leader Bob Duff of Norwalk compared Stefanowski’s income tax phase-out plan to “a fake ad promising chocolate cake is the secret to losing weight. He should own up to the fact that he will be the chief author and steward for raising property taxes on the middle class and working people all across the state.”

Stefanowski also has drawn criticism from former Hartford MetroAlliance President Oz Griebel, who is trying to petition onto the gubernatorial ballot as an independent candidate.

Griebel told The Mirror earlier this month that he hopes to be able to reduce state income tax rates, but removing it entirely would rob Connecticut of the resources it needs to make strategic investments in infrastructure, economic development and education.

Without the income tax, state government in Connecticut doesn’t really have a levy designed to take advantage of a economic boom.

The sales tax has grown, on average, by less than 2 percent over the past decade. And Connecticut and its $19 billion General Fund has no other tax that even raises more than $1 billion per year.

“That’s the workhorse tax in this state,” Griebel said. “We need more income-taxpayers in Connecticut. We don’t need to eliminate the tax.”