Lembo pushes back on Malloy’s prediction of budget surplus

Connecticut’s chief fiscal watchdog slammed the brakes Tuesday on Gov. Dannel P. Malloy’s assertion that the new state budget is on its way to another surplus.

Comptroller Kevin P. Lembo concluded in his monthly budget assessment that state finances for this fiscal year — which began July 1 — are on track to end “approximately in balance.”

State lawmakers approved a $20.9 billion budget — which includes a $19 billion General Fund — and designed the latter with a $10.5 million cushion.

And while Lembo says the plan right now is running as designed, that’s a far cry from the $138 million surplus the governor’s budget office projected two weeks ago.

The administration built its rosy outlook for a surplus largely on improving income and sales tax receipts. But Lembo countered Tuesday that “Strong revenue collections may be promising signs for Fiscal Year 2019 – but fiscal responsibility demands that we monitor these indicators longer before accepting them as sustainable trends.” 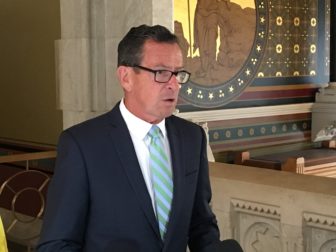 The governor’s budget office projects General Fund revenues will exceed expectations for the current fiscal year by almost $163 million. But it also forecast that cost overruns in the prison system and the Department of Children and Families would eat away $35.5 million of that — leaving a net surplus of $138 million.

“The fact is, the trends in our sales and income tax revenues are clearly running well ahead of the conservative revenue estimates that underlie our budget,” Chris McClure, spokesman for the governor’s budget office, said. “Though some may express caution at the moment, we expect that they will come to recognize this surplus in the coming months. And we hope that the current strength in the Connecticut economy will endure as this economic growth will continue to ease the state’s fiscal situation while improving the lives of our residents.”

Lembo said there are several reasons for taking a wait-and-see approach before projecting a surplus this early in the budget year.

“My office would need to see a continuation of strong collection trends before making specific changes to our revenue forecast,” he said. “For example, mid-September is the first significant collection period for estimated payments for both the income tax and for the corporations tax.”

The comptroller said job and wage growth would have a “substantial impact” in income tax receipts and more meaningful data would be available in the coming months. Employment often surges during the holiday shopping period as many businesses hire temporary, seasonal help.

Lembo added that “Connecticut’s overall budget results are ultimately dependent upon the performance of the national and state economies.”

The Malloy administration also reported two weeks ago that income tax receipts from quarterly filings — much of which is tied to capital gains and other investment-related income — was projected to exceed expectations by $85 million.

But none of those extra funds are factored into the surplus forecast.

That’s because of a new “volatility cap” that lawmakers enacted last November to force the state to do a better job saving money.

The cap specifically forces the state to save income tax receipts related chiefly to capital gains and other investment earnings — which are highly volatile — whenever Connecticut’s annual tax clears a threshold level. This fiscal year, that mark is about $3.1 billion.

Any receipts above this mark must be set aside and deposited into the emergency budget reserve, commonly known as the rainy day fund, after the fiscal year has ended.

Technically, Connecticut concluded the last fiscal year with a nearly $505 million deficit, but effectively it ended with a robust surplus of $939 million.

That’s because more than $1.44 billion in unanticipated income tax receipts tied to quarterly filings were received last fiscal year — but couldn’t be applied to the deficit until after the books on 2017-18 finances are closed because of the new volatility cap rules.

Once that $939 million is deposited into the rainy day fund, which will occur officially at the end of the month, the reserve balance will grow from $213 million to $1.15 billion.

That total, which represents almost 6.1 percent of General Fund spending, is Connecticut’s largest reserve — both in dollars and as a percentage — since 2008.

But it remains well below the 15 percent threshold Lembo recommends for Connecticut given its reliance on highly volatile, investment-related tax receipts.