Both Lamont, a Democrat, and Griebel, a petitioning candidate, told the crowd of more than 200 at the University of St. Joseph in West Hartford that they believe they could provide some income tax relief. But the top priority has to be closing big projected deficits in state finances, and stabilizing surging retirement benefit costs projected to remain a problem through the early 2030s.

Griebel said he hopes to eliminate the estate tax and gradually reduce Connecticut’s income tax back to the flat 4.5 percent rate charged when it was enacted in 1991. Currently, most income is taxed between 5 and 5.5 percent, with 6.99 percent being the top rate applied.

With a focus on stabilizing the state budget and creating new jobs, Griebel added, “the goal would be to have more people paying (income) taxes and drive the rate down.”

Listen to audio of the debate right here:

The two candidates were more direct in their critique of Stefanowski when they talked with reporters after the debate.

Griebel said that refuting Stefanowski’s pledge to phase out the income tax over eight years is not difficult.

The income tax supports 51 percent of the state budget’s General Fund, and no other single tax or revenue source raises enough money to even cover the state’s retirement benefit and debt obligations. 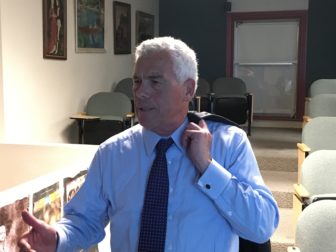 Griebel meets with reporters after the debate

“I personally think it’s an easy one to hit out of the park,” Griebel said, calling Stefanowski’s pledge “poll-tested, red-meat stuff” designed to fool voters. “I think people understand that.”

“Where is Bob?” Lamont quipped. “If Bob’s ready to lead he should have been here.”

The Stefanowski campaign said the Wednesday after Labor Day was too early for a debate, but Stefanowski is willing to debate four other times, beginning Sept. 12 in a New London at a forum to be televised by WTNH, Channel 8.

“Ned Lamont is running for (Gov.) Dan Malloy’s third term,” he wrote. “His fake math is a desperate attempt to hide the fact that he has proposed a new statewide tax on cars and trucks — new tolls on the roadways, and even higher sales and income taxes. The voters of Connecticut are smart enough to know that despite Ned’s rhetoric, he is the candidate who plans to raise taxes, while my plan would lower them.”

Stefanowski launched a new ad this week charging Lamont with planning to impose a new state property tax on cars. As evidence, the spot features a cell phone video of Lamont in which the Democratic gubernatorial nominee says, “And then you look at how we expand the property tax. Maybe you start with cars.”

Lamont has said he is studying options to reduce property taxes. He has proposed reducing income taxes by increasing the credit that offsets a portion of property taxes paid by low- and middle-income households.

Lamont and Griebel both laid the blame for state government’s current fiscal woes at the feet of many past governors and legislatures.

Connecticut ran up about $6.1 billion in budget surpluses between 2001 during the last recession and saved less than one-third of that. What was spent was not dedicated to badly under-funded pension programs.

“To me that was the beginning of the erosion of private-sector confidence in this state,” Griebel said.

Lamont said Connecticut’s “failed political leadership” goes back generations, missing opportunities to invest in transportation and education while not saving for public-sector pensions.

Lamont said his administration would not offer the major financial incentives that Malloy’s did to entice major corporations to relocate — or remain — in Connecticut. 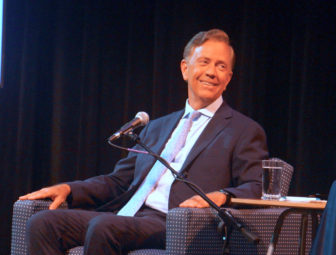 “We rely too much on these one-off incentives and one-off giveaways,” Lamont said, adding he would focus on improving an already highly skilled workforce and bolstering a transportation network in need of investment.

“In general government should avoid winners and losers,” Griebel said. And while he praised Malloy’s incentives in 2011 that drew Jackson Laboratory’s genomic research center to Farmington, Griebel said it would have been much-better suited to Hartford, where it could help revitalize the city and partner with several existing hospitals.

“I think it would have been whatever’s above a home run, a grand slam,” he said.

Griebel was cautious about the prospect of a new casino in a major city like Bridgeport or Hartford. He noted it would imperil a longstanding agreement with the tribal casinos in southeastern Connecticut. They share 25 percent of video slot revenues with state government — a deal worth about $200 million this fiscal year — in exchange for the exclusive right to offer casino gaming in Connecticut.

“That’s a big deal for us,” Griebel said. Even if that legal hurdle could be cleared, he added, a casino could pose major challenges for Connecticut’s aging, overcrowded transportation infrastructure, particularly along Interstate 95 near Bridgeport.

“How are we going to get people there if we get the type of crowds we expect?” he asked.

But he added that if a private casino developer wants to invest $700 million to $800 million in a major city like Bridgeport, “I’d take a look at it,” adding, “I would have an open process.”

Lamont and Griebel found plenty of common ground during the debate.

Both candidates said they would work to link major employers with Connecticut’s colleges and universities to expand job opportunities for new graduates.

They also balked at the idea of a full-time state legislature and agreed that incentives — and not pressure from state government — should be used to lead more communities to expand affordable housing by allowing more multi-family housing developments.

The debate at the University of St. Joseph in West Hartford was sponsored by the Connecticut Conference of Independent Colleges with three media partners — WFSB-3, Connecticut Public Radio and CT Mirror.