Lamont finds more dollars for transportation than Stefanowski, but not enough to fix everything 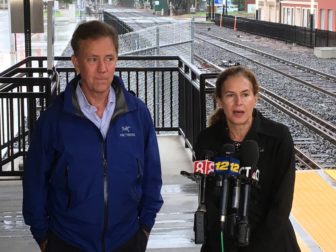 Ned Lamont and Susan Bysiewicz talk with reporters at the Meriden train station.

When it comes to transportation improvements, it could be said that Democratic gubernatorial nominee Ned Lamont is trying to stretch a dollar.

Lamont, who was in Meriden Tuesday to support increased train service and better links between rail, bus and air, still supports only one new source of revenue for a state transportation program that advocates say will need billions of new dollars over the next decade.

And while that source — imposing tolls only on large trucks from out of state — would provide only a fraction of that revenue, Lamont’s chief defense is that it still is more than Republican gubernatorial rival Bob Stefanowski has offered.

Connecticut business leaders say “if you believe in economic development and job creation, you’d better fix your transportation system,” said Lamont. “I hear that wherever I go. … This should be priority number one for the next governor.”

Lamont also promises to encourage private-sector investors to partner with the state to develop new train stations along the Hartford line in communities such as West Hartford, Newington and North Haven, in exchange for a portion of ticket proceeds.

Finally, he said he would explore purchasing the Hartford line tracks, which are owned by Amtrak, saying, “Connecticut can be a better steward of its rail lines than an out-of-state company.”

But how would Lamont pay for all of this?

More importantly, how would he even get to these priorities when — according to state transportation officials, Gov. Dannel P. Malloy, and numerous transportation advocates — a badly needed rebuild of Connecticut’s transportation infrastructure is at risk of slowing to a crawl.

Malloy, who is not seeking re-election, warned Wall Street credit rating agencies, Connecticut businesses, state legislators — and anyone else who would listen — last winter that absent more funding, dozens of key projects would fall into limbo and the state’s transportation program was headed for dramatic contraction over the next five to 10 years.

Some of the key projects on that list include: replacing the elevated section of I-84 in Hartford, commonly known as the viaduct; renovating the “Mixmaster” junction of I-84 and Route 8 in Waterbury; and widening Interstate 95 in southwestern Connecticut.

State legislators provided a fiscal patch this past spring, transferring an extra $29 million in sales tax receipts into the transportation fund this fiscal year and another $120 million in 2019-20.

But that is not expected to stabilize transportation funding beyond 2022 or 2023.

Lamont has said he would limit tolls only to tractor-trailer trucks from out of state. He estimated Tuesday this would raise $100 million per year, but has released no fiscal analysis to back up this estimate.

“We are running a multi-state charity for out-of-state vehicles,” Bysiewicz said.

Joe Sculley, president of the state’s largest trucking company coalition, the Motor Transport Association of Connecticut, said “There is no data to back up statements that trucks are tearing up our roads.”

When asked about transportation advocates’ argument that Connecticut’s transportation system needs far more revenue than he will support, Lamont said “We can make a bit of progress on that.”

When pressed, though, Lamont’s preferred response is to focus on his opponent, noting that Stefanowski has ruled out tolls entirely and also pledged to phase out the state income tax — which would strip away roughly half of all state budget funding.

“While we believe in modernizing transportation to attract jobs, it’s clear that Bob Stefanowski’s tax scheme will cut critical dollars for transportation at a time when they’re needed most. His scheme will close the Hartford Line, end critical upgrades to our bridges, and put more traffic on our roads,” Lamont said.

“Lamont’s plan will raise taxes, continue the exodus of jobs and businesses leaving our state, decimate our budget even further and ensure we cannot afford to appropriately fund our priorities,” Marr added.